“I thought he might be was suicidal until I saw the Arkansas plates. He just didn’t know.” -Humboldt Bay Local

The Lost Coast Outpost has a nice little article about this knucklehead that decided it was a good idea to drive his red Nissan pickup truck onto Humboldt Bay’s North Jetty and get an up close view of the massive 27ft waves.  The driver was quickly inundated and the truck was tossed about until a couple walking down the beach called the Coast Guard:

“Coasties arrived 15 minutes later and determined that it was too dangerous to attempt a rescue by land. A Coast Guard helicopter flew in about 20 minutes after that and quickly lowered a rescuer to the jetty. The driver was harnessed and lifted to safety, hopefully with an important lesson learned.”

HERE IS THE FULL PRESS RELEASE ABOUT THE INCIDENT FROM THE COAST GUARD:

“The Coast Guard rescued a man from the Humboldt Bay north jetty Thursday after he became stranded in his vehicle during a period of high surf and high tide.

Coast Guard Sector Humboldt Bay watchstanders dispatched crews aboard an MH-65 Dolphin helicopter and a 47-foot Motor Lifeboat to the scene after being notified at approximately 11:26 a.m., that a man had driven his vehicle onto the jetty where his vehicle became disabled, putting him in distress from breaking waves and high tides.

The Coast Guard aircrew determined the conditions to be too hazardous for other means of rescue, and hoisted the man into the helicopter. The man was reportedly uninjured and the vehicle remains on the jetty until conditions are safe for recovery.

The Coast Guard reminds the public to remain vigilant during changing ocean conditions and remain off coastal rocks, jetties, and outcroppings during periods of high surf. When boating, always wear a life jacket, file a float plan, and check the weather before heading out. The National Weather Service forecast for the area can be found.” 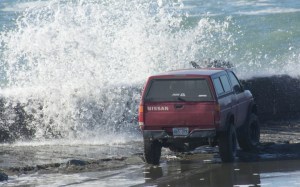