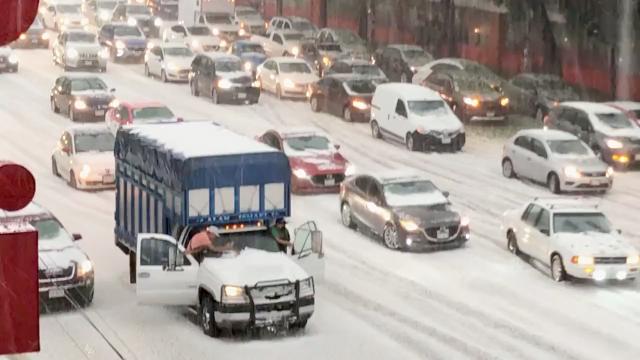 Similar to the freak hail storm that buried Guadalajara in feet of ice back in 2019, Mexico City saw several inches of hail fall during an intense summer storm on Sunday, June 13th.

It’s almost hard to believe that the video below was filmed in Mid-June in Mexico. Take a look.

Mexico City was hit by a freak hailstorm Sunday burying the city in many inches of hail.

An incredible winter-like scene in mid-June.pic.twitter.com/Ib0OQMLHbW

The storm caused extensive damage across the city. Most notably, the roof of a supermarket collapsed injuring at least one person.

“A supermarket roof collapsed in Mexico City on Sunday when it gave way under a hailstorm and heavy rainfall.

Two hundred people were evacuated from the Soriana supermarket located in the Mixcoac neighborhood in the Benito Juárez borough, south of the historic center. At least one person was injured when a quarter of the roof collapsed, local officials said.”

Anybody else kind of okay if freak hail storms are something that will happen more frequently? I know that means extensive damage to cars, buildings, and other infrastructure, but hear me out.

Won’t those 10-15 mins of fresh skiing and snowboarding turns on hail in the middle of June hit a little different?

Thoughts and prayers for everybody who is negatively effected by these type of storms, but I’m gonna pull out my skis faster than you can ask ‘Is it snowing in the middle of June?’ and reap the benefits.