Low pressure will enter the Sierra Thursday night bringing moderate snowfall over 7,000 feet for Friday. The PNW becomes very active and stays cold. The Rockies grab very warm temps followed by a moderate storm for the weekend. The powder alert is for decent snow amounts at upper elevations of the Sierra for Friday morning (Timing), and a prolonged snow event for the Pacific Northwest. The Rockies will also see several feet of snowfall over a prolonged period of moderate dumps this weekend and next week. There might not be any single deep event, however conditions will continue to improve as we approach the 3rd week of March.

Tricky chase forecast with many options. The Sierra will likely see the most overnight snow of most mountain ranges in the next 24 hours. Temps are warm with decent amounts Thursday night at mid to upper elevations and light snow at the bases. Snow levels decrease on Friday morning so when you arrive at the slopes some light accumulations are possible on the roadways near lake level. Expect 6-10 inches at upper elevations and 2-5 at the bases from this next storm. Some isolated pockets of 8-14 inches might be possible at the peaks. Mammoth might be a better option gaining lower temps for Its elevation advantage. The upper mountain at Squaw, Kirkwood, or even Sugarbowl could do well at the summits. Snow quality will be on the surf side which is actually a good thing at this time of year to cover up the nasties below. We can’t be ultra picky in late March.

For the Pacific Northwest, colder temps will prevail in the next 7 days. It’s ironic since November was one of the coldest months for the Cascades, and now in March, we are seeing a return to colder than normal temps. Light snow Thursday will turn moderate especially over the northern Cascades Friday afternoon. Saturday could deliver 4-9 inches at many resorts in Washington (Central or northern favored) with similar amounts for Oregon (Moderate event, with snow showers lingering into the weekend).  Quality should be high! More snow for the PNW in the extended.

In the Rockies, low pressure from the Northwest drops south over the intermountain corridors of western Idaho, Tetons, Southern Montana, and the Wasatch Friday PM to Saturday afternoon. This system has several model solutions, with some taking the highest moisture into northern Utah (Logan, Beaver Mountain) and southern Idaho for Saturday morning. This would also perform well for the Tetons and even Big Sky. Other solutions push it further south mainly impacting the Tetons and most of the Wasatch Range including the Cottonwoods. Colorado will see benefits late Saturday into Sunday for many mountain locations (Moderate event).

Below: Total moisture ending Saturday morning for Wyoming, Montana, and Utah. The American GFS is favoring northern Utah and the Tetons. The new GFS (We are about to get an updated model of the GFS) is pushing higher amounts north of Jackson into Moose, and southern Montana. The Euro also is offering a more northerly push of snow into Montana. Need to wait for new model runs to pinpoint the highest totals. This map shows nearly a 1/2 inch of liquid for the town of Jackson (.42 on the map) and 3/4 of an inch near Logan Utah (.79). Beaver Mountain could come up with some surprises. Other models push higher amounts towards Big Sky. 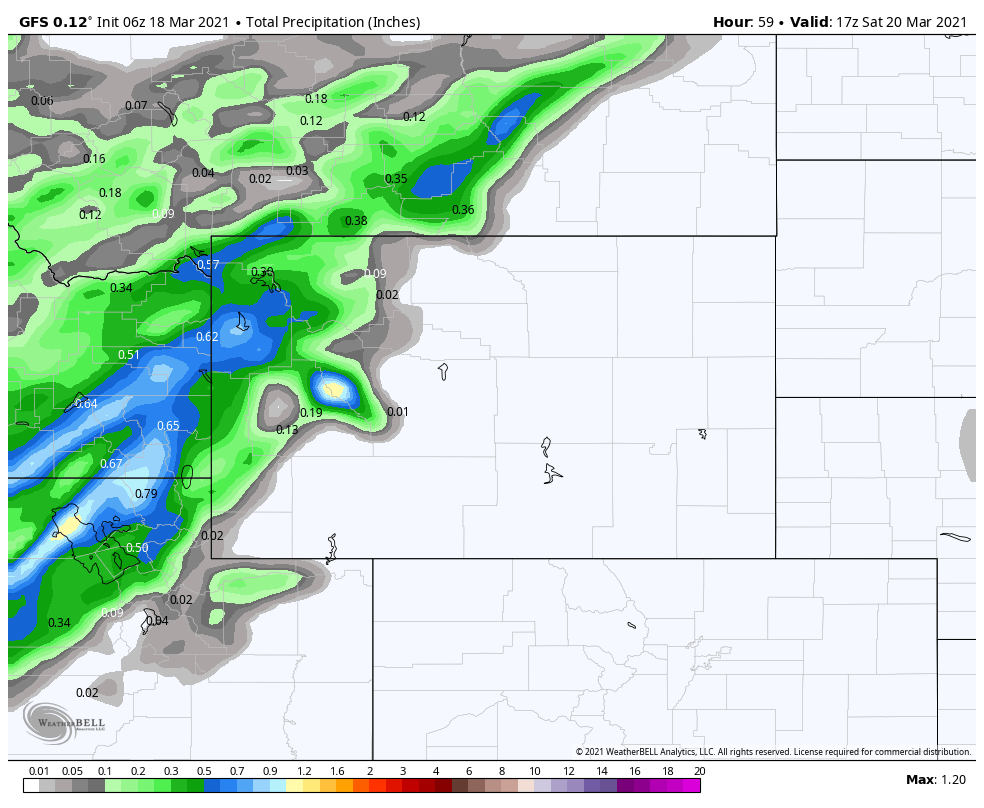 Bottom Line for the Rockies

* Storm totals are in the 5-11 inch range Friday-Saturday (Decent but not epic) with fairly dense snow (Cover up the slush from Friday).

*Eyes are on the northern Wasatch, Tetons, and southern Montana (Anyone here can score at this point until we have more model data).

*Cold air behind the front Saturday will enhance snow showers, especially for Utah under NW flow. While it’s possible that light snow falls Friday night in Utah (Higher amounts up north), moderate amounts are possible for areas south of I-80 during the day on Saturday (Colder NW flow). This would include Alta, Snowbird, Brighton, and Solitude.

The extended period looks very active for the Pacific Northwest. Moderate to perhaps heavier bands of snow will set up over the Cascades Sunday afternoon into Monday. This might favor the central Cascades of Washington. Additional snow will also be falling in Oregon Sunday/Monday. This colder system will drag another area of snowfall into the Rockies at some point early next week (Monday night or Tuesday). Some models show another decent snow even for the Front Range near Denver.

Below: Low-pressure trough setting up over the Rockies for early next week. 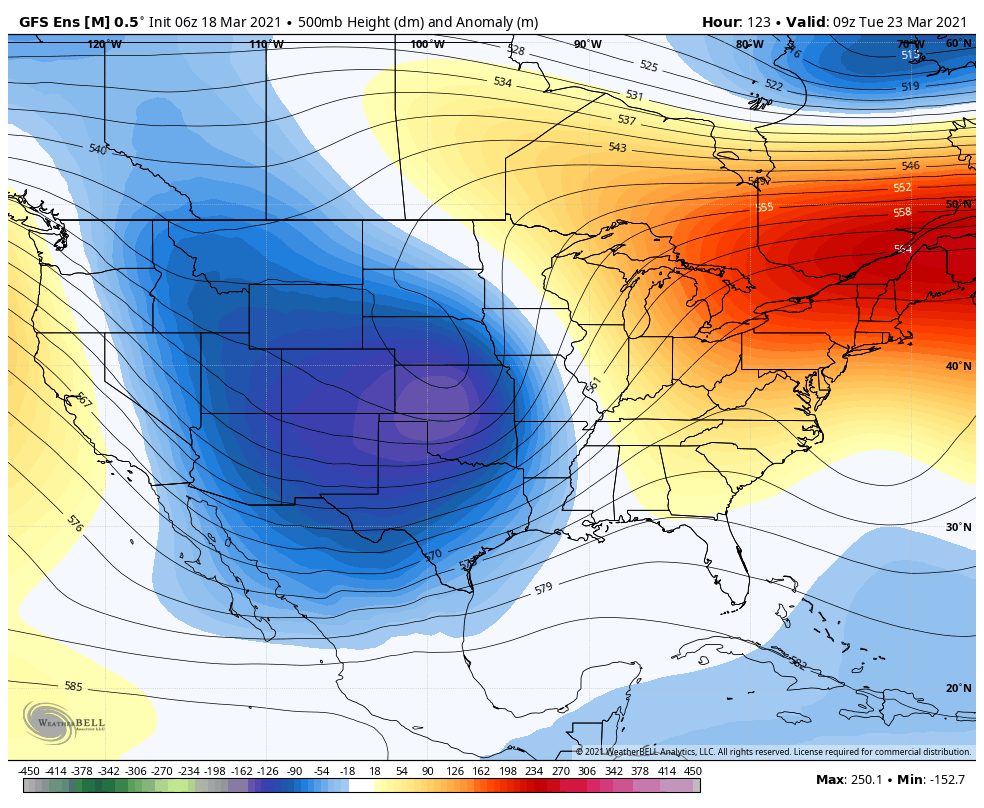 While the Tuesday storm could be decent for some spots in the Rockies it’s too far out to forecast with high confidence.

Yet another decent-looking trough enters the west late next week providing another good shot of snowfall for the Pacific Northwest and most of the Rocky Mountain Region (Thursday or Friday).

The Good: We stay in an active pattern next week with low-pressure being noted on most of the ensemble runs for the PNW and Rockies.

Please consider donating to Powderchasers for our forecasts this season. Also, if you want custom forecasts and like to chase powder join our concierge program.