If you are looking for a custom long range forecast to chase powder, book reservations well in advance, traveling with a Sprinter Van (The new norm) or simply want to score the top deep days of the season, please sign up for our Concierge Program here. We rarely miss a deep day however obviously this season is going to present some challenges.

There are 2 regions of interest in the next 5 days. A teaser storm will quickly move through the Oregon and Washington Cascades Sunday night/Monday with 2-5 inches of new snow. Another stronger system moves into the Pacific Northwest for Tuesday night-Wednesday. That system should land 7-14 inches for many Ski Areas. This includes the central Panhandle of Idaho with slightly lower amounts in the far north. The Good: Teaser storm Monday with another storm on it’s heels for Wednesday. The Bad: Warming temps in between the storms. The storm for Wednesday will be on the warmish side especially in the southern Cascades. The best and deepest snow might happen in the northern Cascades but all ski areas will see decent snowfall.

This system will also reap some moderate rewards for the higher peaks of BC, near Whistler.

The short wave trough in the PNW will drop south over the 4 corners late Sunday night and produce very high moisture content snowfall for the San Juan Range on Monday. SW winds will pump a decent fetch of moisture from late Sunday night through Monday for the San Juan Range of Colorado. This will favor the eastern mountains towards Wolf Creek, and perhaps Purgatory (Dense snow). Silverton may also see decent amounts. Less snow will be falling in the northern San Juan Range (Telluride). SW winds shift to the West and finally N, NW Monday afternoon through Tuesday. This will push moisture further north including the Front Range near Denver and the mountains near I-70 by Tuesday.

West winds for several hours may favor Crested Butte and even an outlier surprise at Beaver Creek, or spots closer to Aspen, Sunlight etc (Moderate snow possible). With the N or NW wind shift Summit County, and areas closest to the Front Range are likely to grab generally 3-7 inches late Monday night throughTuesday. Roads will become snow packed along Vail Pass and most areas of the Front Range Foothills on Tuesday. The Good: Decent moisture fetch and snow totals for the San Juan Range (12-16). The Bad: Warm temps in the San Juan Range Monday will keep snow levels as high as 9500 feet (Wet snow). Cooler temps don’t move into north/central Colorado until the latter part of the storm Tuesday morning. Caveat: someone might score an outlier surprise like Crested Butte, Aspen, or even along the Front Range Foothills (RNP, Berthoud Pass, Winter Park). The models show generally 3-7 inches at many mountain locations with a few spots seeing higher amounts. Wolf Creek Ski Area will see 12 Plus of wet snow by late Monday night (Storm ski).

Below: 12-18 inches above 9500 feet likely for the eastern San Juan Range of Colorado through Monday night. Elswhere, some highlighted spots near Gunnision, with less snowfall furthern north initially. Additional snow is likley for the Front Range on Tuesday (This map is stamped at 4AM Tuesday morning). 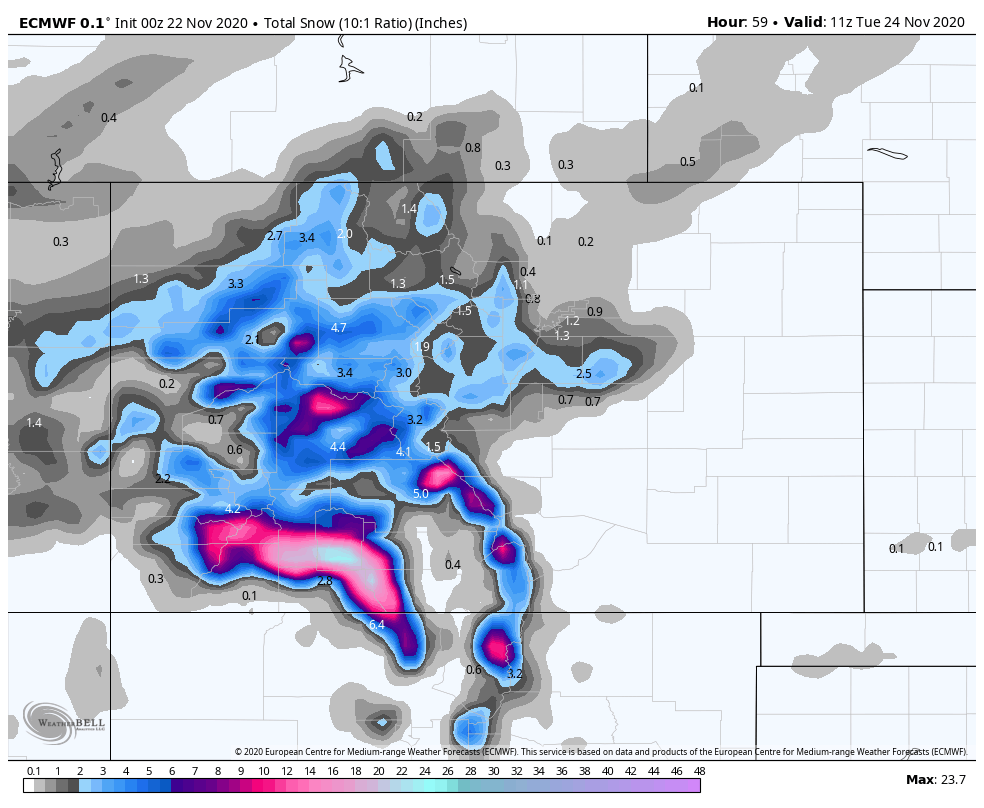 Below: Temps are warm at 10K feet, just at or above freezing Monday morning in Colorado (Snow level will be 500 feet or more below the actual freezing level). Perfect base building snow. 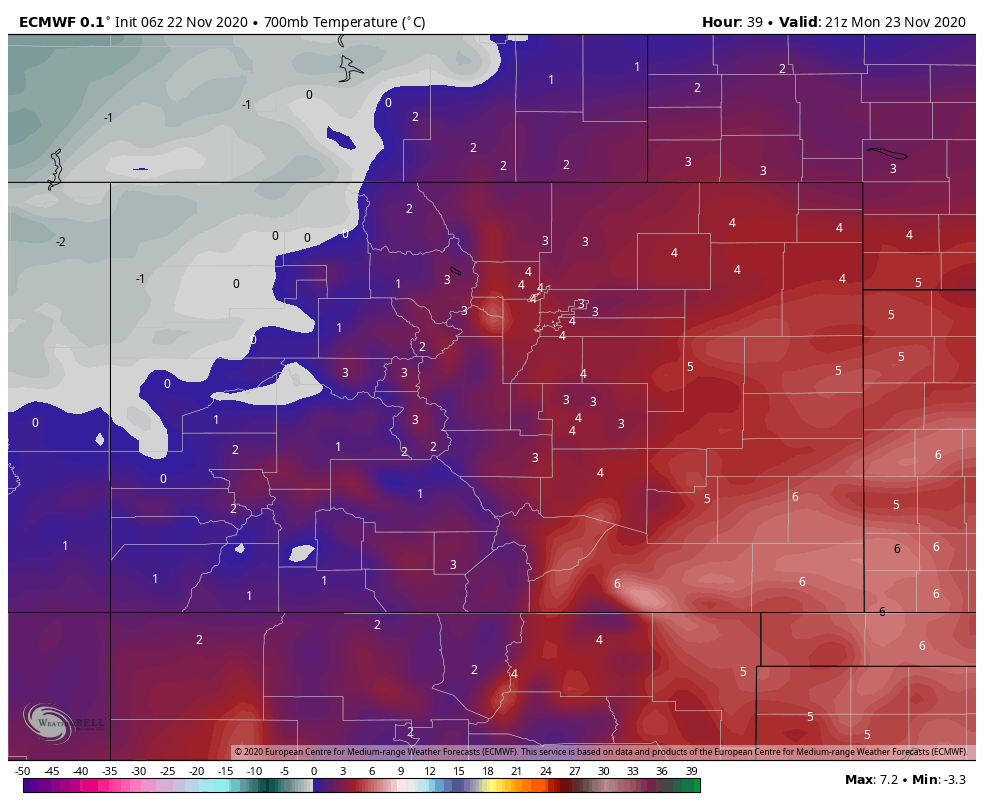 Below: Temps cool by Tuesday morning where it will be snowing in most mountain regions of central and northern Colorado including the Front Range. 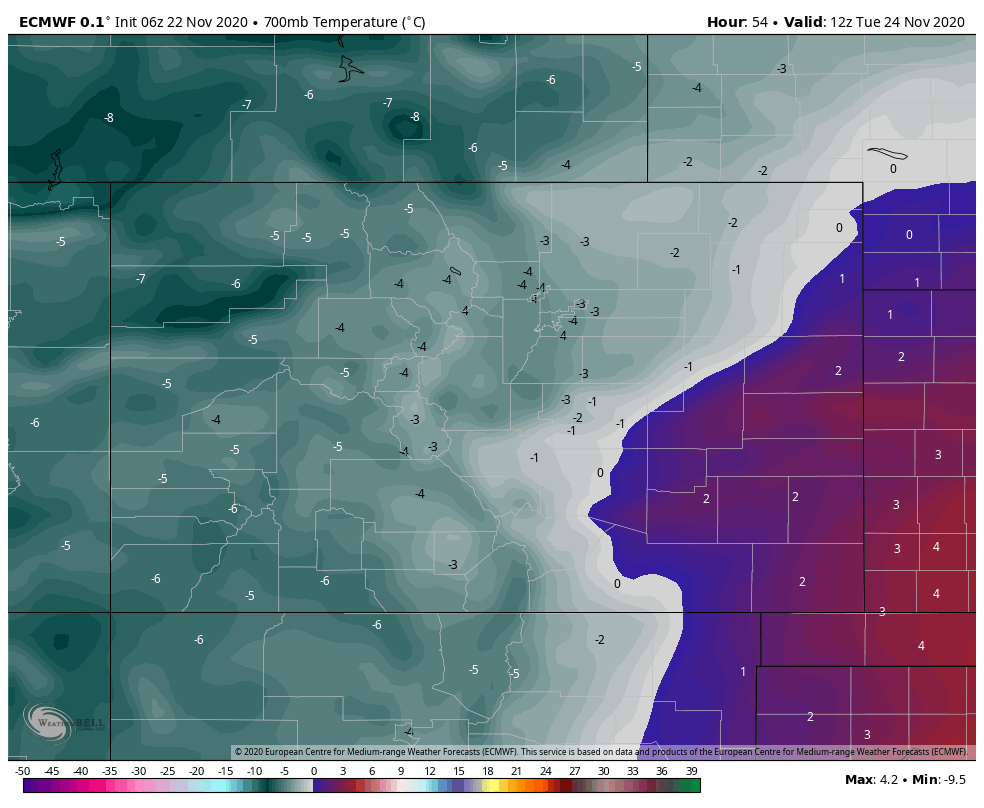 The trend looks like a high pressure ridge is going to take hold of the Rockies through at least the December 8th. There are some signals that a few additional systems ride north over the high-pressure ridge and impact BC and perhaps the Cascade Range as early as next weekend into the following week. The deterministic models are pretty confident in this solution, however the ensembles are not showing a clear signal just yet.

Below: Low pressure on the ensemble runs may be impacting the PNW or BC by late next weekend while the Rockies stay dry. 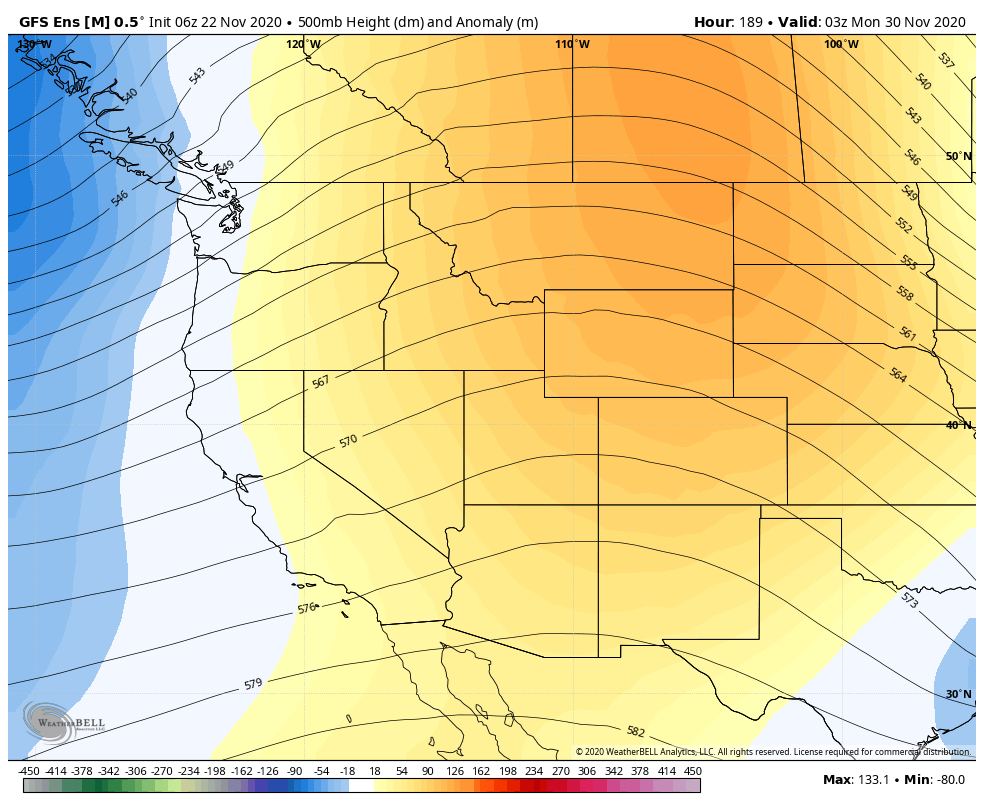 Below High pressure ridge for the west on December 2nd. There is no signal of any changes through at least December 7th. 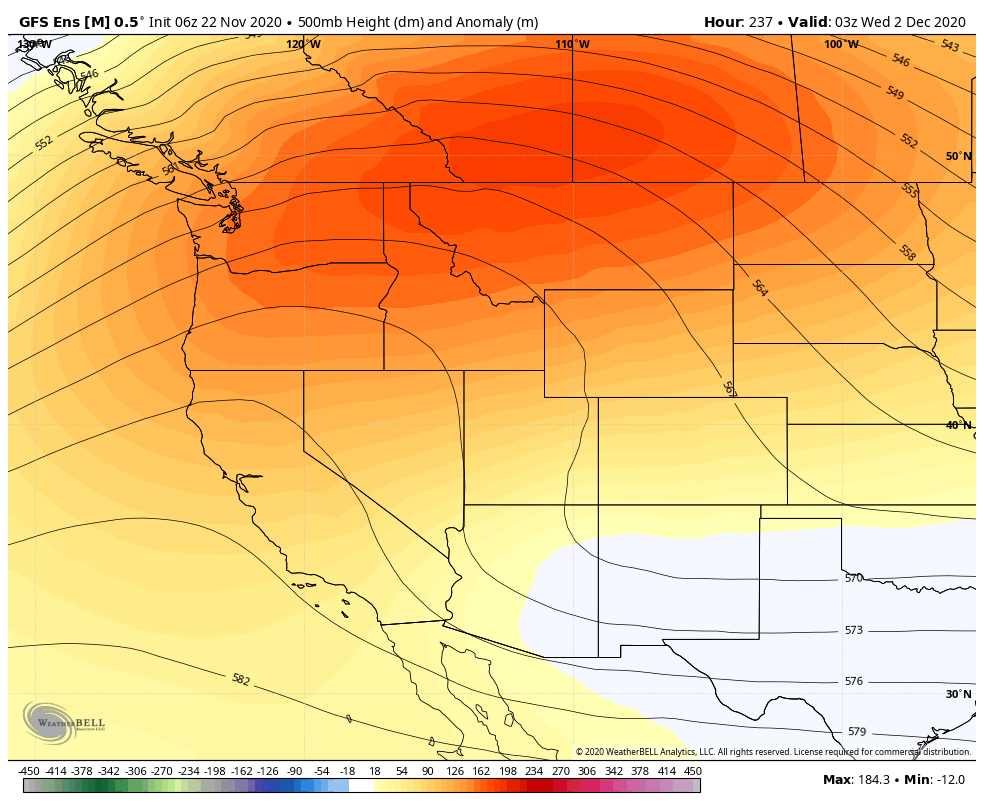