A relatively strong system will land double digits in the Cascades this weekend that filters into the central Panhandle of Idaho Sunday-Monday. Another disturbance will move up from the south on Sunday into th 4 corners bringing moderate snow favoring Southern Utah and Colorado. The timing of these storms may bring no single overnight deepness but 24 hour totals will exceed 12 inches in many areas in the PNW Sunday and Monday. Colorado or Southern Utah are in scoring position for Sunday. Additional moisture moves north in Colorado mid morning Sunday. The PNW system moves into the northern Rockies, Monday/Tuesday.

Below: Total snowfall for the Washington and Oregon Cascades through Monday morning (Sunday is peak) favoring the central and northern regions of Washington.  The Euro not shown is more bullish for areas south to Crystal. The overall trend has been higher amounts to the north.

Models are not in agreement this morning with positioning and timing of the next event due into the PNW on Sunday. Whats known, is that a decent trough Im the PNW with lowering temperatures will arrive late Saturday night or early Sunday morning. Moderate snow will fall from north to south (Baker may report higher numbers Sunday morning with resorts to the south much less) in the Washington Cascades. Moderate snow will fall during Sunday (5-10) in many areas before tapering off Monday morning. Totals will range from 10-16 inches by Monday morning most likely favoring the central or northern Cascades of Washington. The Good:  Colder Temps midway through the storm cycle, increasing quality- decent amounts.  The Bad: Warming prior to the event could formulate some under crust with the colder temps Sunday and especially Monday. The models are not In agreement. The GFS is slightly pessimistic for the southern Cascades or much snow overnight Sunday into Monday.  The Euro was pessimistic but suddenly optimistic for slower timing and better odds of overnight snow into Monday in many areas.  With mixed signals, need to wait to determine chase dependent on timing.   The most likely scenario is 5-10 inches Sunday and 4-8 inches into Monday (Storm totals 9-18 inches) with higher amounts for the central Cascades (Stevens, Alpental).

A 2nd system moves Into the 4 corners Sunday.  Snow will be falling from Brian Head and Eagle Point in Southern Utah through to Purgatory and Wolf Creek Sunday morning. Arizona Snowbowl gets grazed.  Moderate or Heavy snow is possible at times Sunday for Wolf Creek with SW winds. Storm ski moderate totals Sunday. Telluride is a solid wildcard with unfavorable wind direction initially (SW) before NW winds start to crank out moderate snow Sunday (Storm Ski). Silverton will also score pow. In Utah, The GFS pushes moisture as far north as Sundance, just south of the Salt Lake Valley (Provo).  If you are in Utah its possible with a 1 hour drive south of SLC you could land some light snow in Robert Redford’s backyard resort (Sundance).  The Euro keeps most of the action further south. Confidence still lacking.

Colorado brings a mix of scenarios.  Winds shift to the NW late Sunday morning that will push snow further north into the I-70 corridor. While southern resorts might report 3-6 inches Sunday morning (Snowing) resorts to the north will attempt to catch up late Sunday AM through Monday.  The GFS shows higher amounts possible along I-70 while the Euro really favors resorts to the south.  To complicate this forecast winds shift N or NE at some point late Sunday that will push snow along the Front Range of Denver and the Continental Divide Resorts.

Below: Total snowfall for Colorado through Monday morning.  The Euro (Not shown) is less optimistic for the northern and central mountains than the American Model shown here. Highest amounts are likely in the southern mountains late Saturday night into Sunday.  Central and northern mountains might do best late AM Sunday into early Monday.  Upslope N or NE winds might uptick the areas near the Front Range and RMNP late Sunday into Monday. Remember the Euro pushes most moisture further south (Not shown). 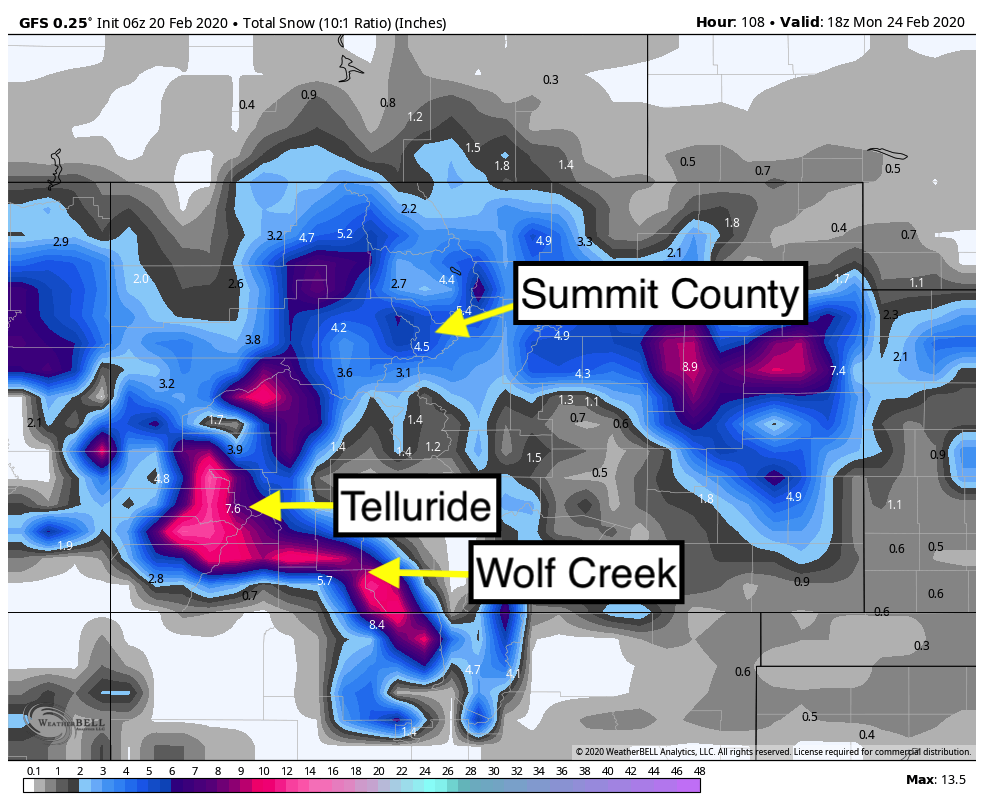 The storm in the Pacific Northwest this weekend will move into the northern Rockies Monday/Tuesday. The Tetons and Southern Montana (Big Sky, Bridger) are favored for some light or moderate snowfall beginning Monday mid morning and ending on Tuesday (3-7).  The Wasatch will get grazed with some light snow (2-5). Residual moisture also will bring a return of light or moderate snow to most of north/central Colorado for Tuesday morning (Some additional snow on the AM reports).  Its too far out to forecast amounts with confidence so the numbers above are likely going to change (current model data). Aim for a light or moderate refresh in Colorado, Montana, Tetons and perhaps Utah late Monday into Tuesday.

Enjoy the powder everyone and remember to support PC with a donation or by joining our customer powder concierge program.