Powder Watch For Cascades and Rockies | 2+ FEET of SNOW Forecasted

Powder Watch For Cascades and Rockies | 2+ FEET of SNOW Forecasted

We are watching a decent storm to roll into the Pacific Northwest this weekend that will track over the north/central Rockies by Saturday/Sunday. Some snow will continue into Monday especially in northern Colorado where the heaviest snow will fall on Sunday evening. The Cascades will see a moderate storm in the short term on Friday before more significant snow arrives Saturday PM to Sunday AM. Some spots in the West will see 15-30 inches by late Sunday night (combined snow from Thursday-Sunday night). The highest amounts will likely stretch over a 3-4 day period beginning Thursday in the Pacific Northwest favoring the central or northern mountain ranges. The Tetons, Wasatch, and northern Colorado are solid contenders. BC and the northern Panhandle of Idaho are wildcard picks.

Light snow is still falling in the Tetons where JHMR and Targhee scored 6-7 inches Tuesday night. Snow will be light density with temps in the single digits at the summits. Folks are definitely scoring face shots this morning with all the light density pow.  The next few days will bring a moderate storm to the Cascades of Washington.  That system will favor the Central and northern regions with Mount Baker in the 6-11 inch range by mid-morning Friday and Stevens sneaking out 5-10 inches (Snoqualmie and Alpental along I-90 might be close in similar ranges).  Areas further south will see less snow (3-6).  The Good: Cold Temps, decent quality, moderate amounts.  The Bad:  Very warm conditions preceding the cold front and snowfall may create a frozen layer below the new snow Friday morning.

Below: Total snowfall through Friday morning favoring the central and north Cascades of WA. This map depicts the Canadian Model. The American GFS was a bit more bullish even in the southern zones and the Euro was showing much less snow (4-8 for most ski areas versus the amounts in the forecast above). 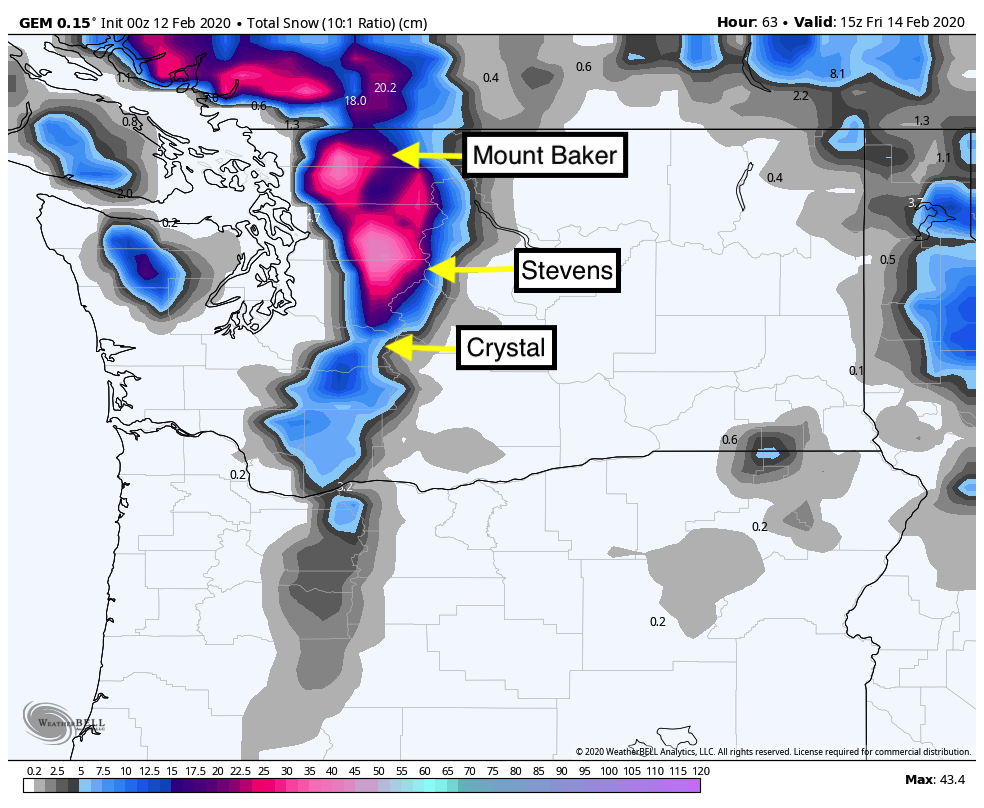 The Cascade system Thursday-Friday moves into the Panhandle of Idaho (Light to moderate snow) late this week. This will also impact southern Montana (Bridger and Big Sky) and the Tetons who will be directly under the jet and westerly flow.  The amounts will be on the light side with perhaps 3-6 inches in isolated areas by late Friday.  A brief break in the action for the Rockies on Saturday will occur before a stronger system impacts the West on Sunday/Monday. This could produce 1-2 feet of snow for the Rockies with some isolated higher amounts.

In searching for the deepest snow I’m splitting hairs this morning with still a wide discrepancy on snow totals, especially in the Rockies. The Euro which is traditionally more conservative (Believed to be slightly more accurate- but not always) is a bit more bullish than the GFS American model for the Rockies Sunday-Monday.  The Canadian model that has gained accuracy this year is even more bullish. The Cascades grab overnight snow Saturday-Sunday where the Rockies gain early AM snow (Before the lifts open) building to deeper amounts by late Sunday. The Tetons might score more snow for opening lifts on Sunday with the Wasatch catching up by mid-morning.

Amounts in the Cascades should exceed 12 inches for opening lifts on Sunday. This will favor the southern and central zones of Washington (Crystal, White Pass, Alpental) and most of Oregon.

Amounts in the Rockies may exceed 1-2 feet favoring the Tetons and Wasatch by 7 PM Sunday.  The Canadian model shows snow moving in faster late Saturday night with significantly higher amounts (2 feet plus in some isolated areas of Wyoming)  where the Euro is slowly evolving to moderate or deep conditions by mid-morning Sunday.  The southern Montana resorts will be on the northern edge of deepest moisture but will still be seeing snowfall Saturday night through Sunday. It’s possible the current models are overdone.

Caveat:  A warm front edges in late Saturday/early Sunday into the Rockies rising temps to above freezing near 5500 feet.  This might produce slightly upside-down snow in the Rockies before temps drop again at some point Sunday late AM or early PM. (North to south).

Below: Slightly warming temps late Saturday and early Sunday for Wyoming and Utah (2C at 4800 Feet time stamp 10 AM Sunday). 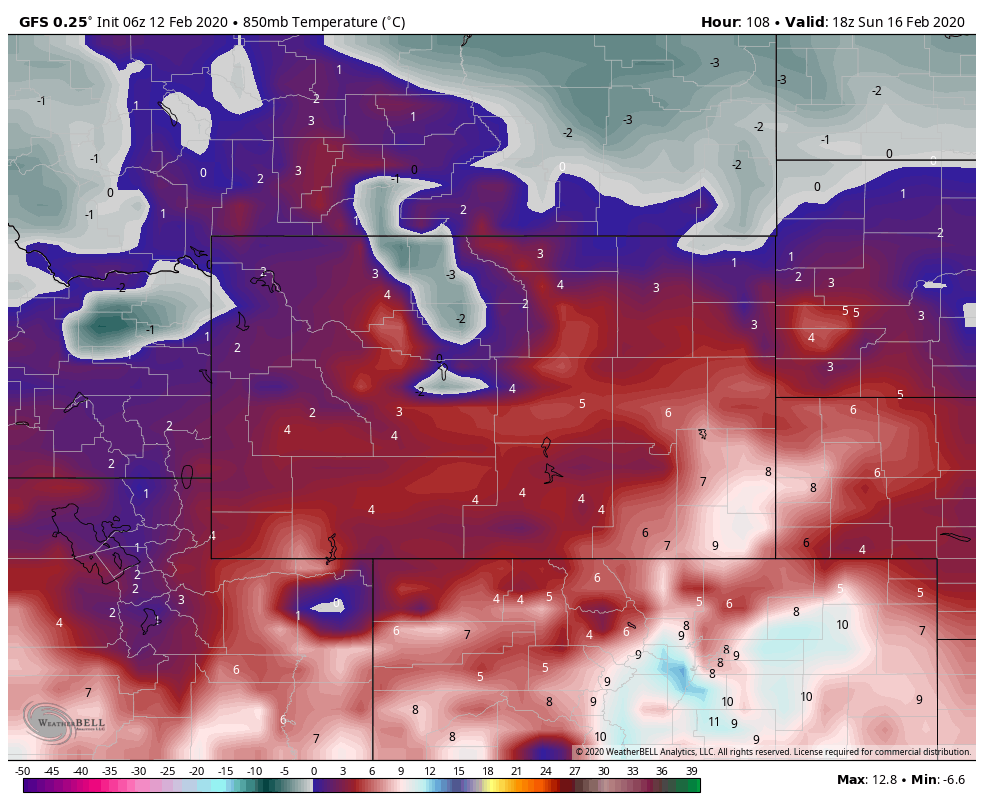 Below: Temps Drop on the latter half of the storm cycle Sunday PM with a cold front (Late Sunday from north to south impacting the Wasatch by 7 PM). 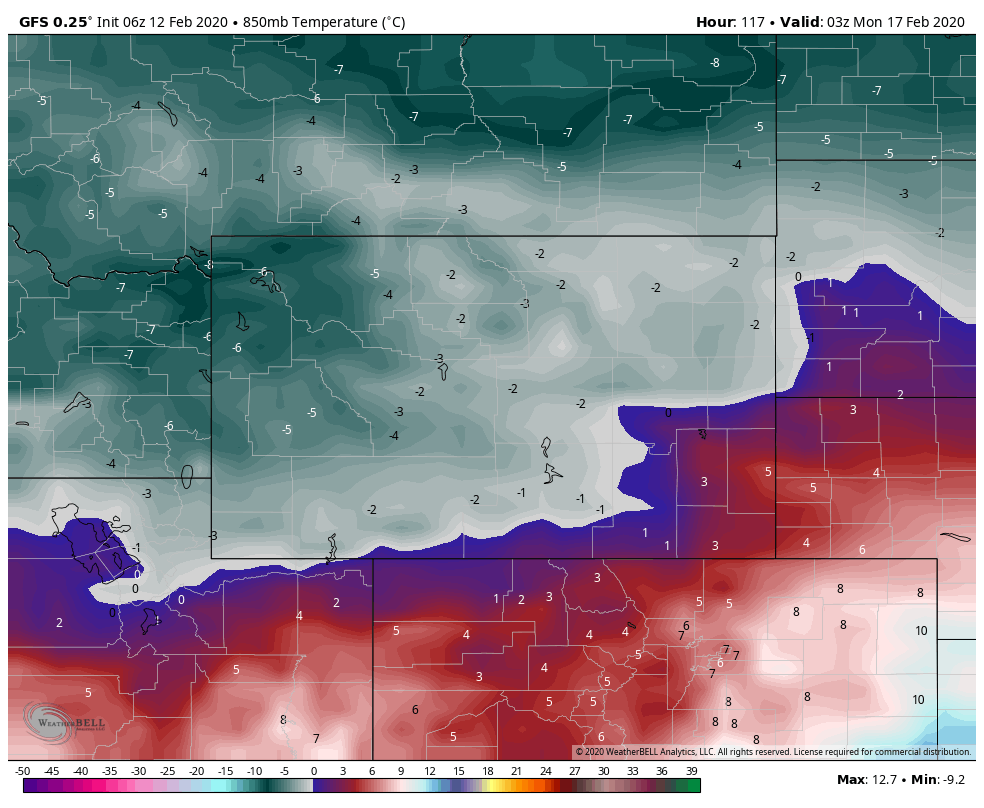 Below: University of Utah Plumes NAEFS (multiple models) showing a long duration trend of up to 30-40 inches for the Tetons over the next 5 days peaking on Sunday.  There is also some discrepancy with some models showing less and a few with higher amounts. The NAEFS is normally overdone on amounts so taking away 25% provides me the confidence of 2 feet with higher amounts possible by late Sunday night (This includes snow from the Friday teaser). 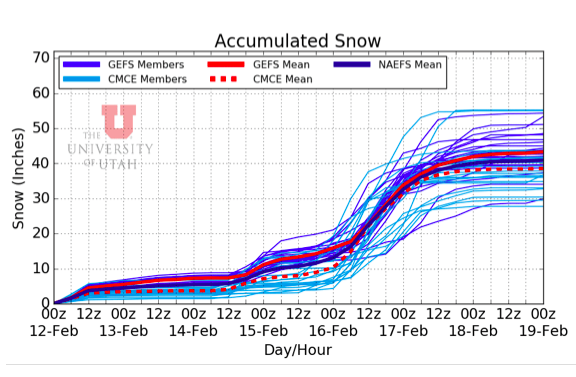 Below:  Here is the same map from above for the Alta Ski Area (Same parameters as above).  Lots of widely spaced outliers (Lines) lead me to have lower confidence in amounts. High confidence for 12-15 inches with higher amounts possible by late Sunday night. 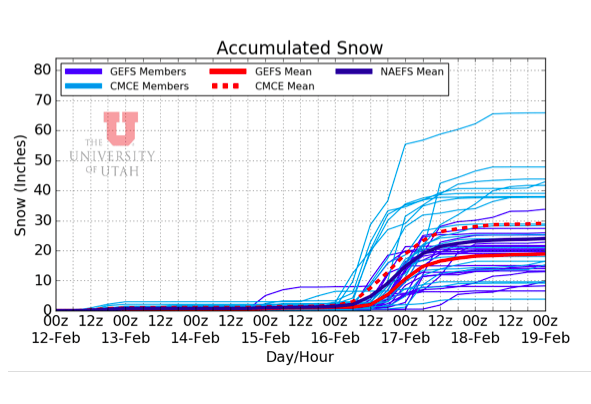 Colorado grabs the most snowfall mid-Sunday through Monday morning.  Monday will offer a decent powder day. The highest amounts currently are shown to be at Steamboat (12 plus) with slightly less to the south. Models show heavy snow on the northern Front Range near Fort Collins and perhaps Rocky Mountain National Park. Its too far out to provide confidence in exact amounts. High confidence remains for decent snowfall for Colorado Sunday night to Monday especially along or north of I-70. More updates on a later post.

ENJOY THE POWDER EVERYONE!  Concierge Members can email us for specific chase info.  powderchasers1@gmail.com