Heavy snow is still falling in Northern Utah (Idaho border), and the Tetons as of Tuesday morning.  Beaver Mountain (Near the Idaho border) reported 18 inches in 24 hours Tuesday morning and another 5 fell during the day at press time.  JHMR is reaping the rewards from SW flow (12-14 inches) while nearby Targhee is well behind.  Chase to the Sierra for storm skiing Thursday (Strong winds may impact upper lifts) and perhaps Utah or Wyoming for Friday. The San Juan Range, especially Colorado will grab a decent storm on Friday! The PNW and western areas of BC could be decent by Saturday.

The bulk of moisture fell in northern Utah and most of the mountain ranges of Wyoming on Monday night.  Snow is just now entering resorts near Ogden (Snowbasin, Powder) Tuesday afternoon and will spread south throughout the day eventually into the Cottonwoods.  As of 2PM it was snowing 2-3 inches per hour along I-80 near Park City.  Strong winds are impacting upper lifts in some locations. .  Expect a quick burst of 3-7 inches for most of the Utah resorts through Tuesday night. Beaver Mountain would have been a top pick on Tuesday with 18-23 inches in the past 24 hours (Near Logan- Idaho border). Wednesday may offer a better opportunity for resorts form Ogden and south into the Salt Lake and Park City Valleys.  Some terrain that has been closed since Sunday may open on Wednesday from resorts that are still digging out from the weekend (Those secrets won’t be disclosed).

The Tetons will continue to grab light or moderate periods of snow through Wednesday morning albeit lighter amounts than the previous 24 hours (3-7 by Wednesday morning with a break during the day).  The Tetons have seen over 12 days of consistent Snowfall!  Reports from JHMR today were coming in deep, especially on aspects not impacted by the wind. Snow will increase again for Friday.  Another skier texted me from JHMR as “Blissful Powder Day”.

If you are chasing deep powder, the Sierra will get deep on Thursday with 12-18 inches likely.  Most of that moisture will fall late Wednesday night into Thursday with peak intensity while the lifts are spinning on Thursday.  Look for terrain openings on Friday including the summit of Mammoth which will likely remain closed during the storm on Thursday.  I would aim for storm skiing lower elevations Thursday and new terrain to open on Friday.  Unfortunately, I don’t see an overnight dee dump versus the peak snowfall on Thursday.  Aim or late Thursday or early Friday.

The PNW continues to score blower pow!  Crystal had another 10 inches last night on top of the 15 that fell in the previous 24 hours.  DITTO DITTO.  It’s snowing in the lowlands.  The models show deep moisture north of Seattle Tuesday night into Hurricane Ridge (Olympic National Park) and areas north towards the Canada border.  Other resorts will reap continuous light to moderate snowfall tonight into Wednesday (Mt Baker might score higher amounts).

In looking for powder in the extended forecast, Friday to Sunday has some options.  Moderate to heavy snow will be falling over the San Juan Range, especially Colorado (Wolf, Purg) on Friday.  Aim to storm ski Friday with some new snow for lift openings.  Taos is a wildcard with moderate snow beginning sometime after daybreak on Friday.   Wolf will be deeper.

The Wasatch and Tetons will be seeing another decent storm for Friday.   Very cold air will enhance snowfall especially in Utah where 700 MB temps will be very cold (9800 Feet). The Tetons may equally score.

Below: Cold temps in the Rockies for Friday will enhance snowfall, especially for Wyoming and Utah. 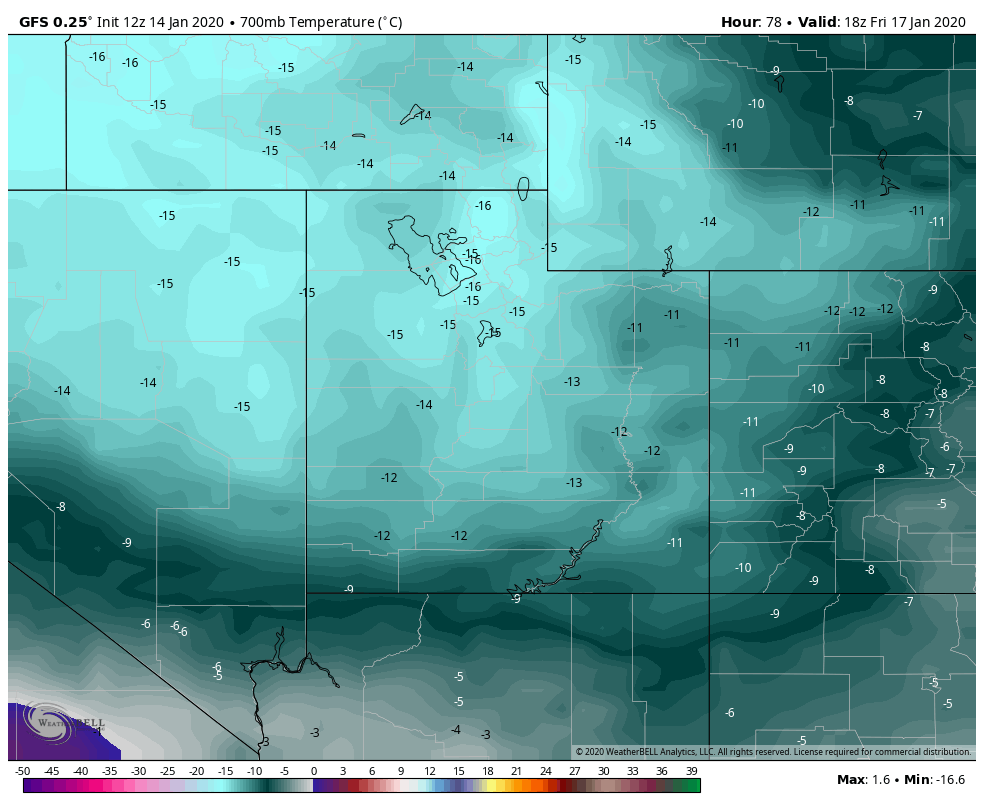 The Cascades are going to stay on the pow train this week.  Peak moisture should hit the Cascades and Whistler for Saturday morning.  I think the northern Cascades, perhaps Baker will outperform the others. Its too far out to forecast with certainty.  My eyes are on Whistler or the northern Cascades currently for the weekend(Low confidence so decisions will be fine-tuned on a later post). For a novelty try Mount Washington on Vancouver Island BC for perhaps the deepest amounts.

Sign up for our concierge if you want to chase powder and grab a custom forecast.