The New Year Brings Powder To Many Parts Of The Rockies

The New Year Brings Powder To Many Parts Of The Rockies

Decent amounts of pow fell last night in the Tetons (7 inches at JHMR and Targhee) with the Wasatch attempting to catch up this morning. I mentioned chasing north to south yesterday, so if your in Wyoming ski powder today and chase to the Wasatch for Thursday. You could hang in Utah today and storm ski where things should be in the 5-10 inch range by 3PM. Northern Colorado will see a powder day on Thursday morning. The Northwest saw snow on Tuesday in the northern ranges with an unfortunate warm up due Thursday night into Friday (Rain). Heavy snow will finally blast the Cascades this weekend with much colder temps and eventually weaken as it moves into the northern Rockies.

As of 7AM MST snow totals are quickly changing with snow falling over many areas of the Rockies.

Jackson Hole/ Targhee-  6-7 inches per the snow telemetry (Unofficial) with higher amounts at the summits.

Moderate snow will continue in the Tetons Wednesday with an additional 5-10 inches of light density pow by 6PM.  Snow will. continue albeit lighter Wednesday night (Storm totals in the 10-20 inch range).

The Wasatch is quickly catching up.  Warmer temps (Colder in Wyoming) will initially put down a nice layer of medium density powder Wednesday (6-10) before cooling in the afternoon. The cold front passage due on Wednesday afternoon will increase snow intensity and quality into Friday.  Storm ski Wednesday (Deep by afternoon). Caveat:  Strong winds may impact upper elevation lifts!  Strong winds may continue into Wednesday evening before decreasing late. NW flow will increase quality in the Wasatch Thursday night into Friday morning.  Heaviest snow will fall in the evening hours with intensity decreasing after midnight.  Expect moderate amounts for your first chairs on Friday (Could be epic with right side up pow. Might be some wind impacts).

Elsewhere in the west Idaho is scoring big time on the western corridor per my forecast yesterday. 12 inches has fallen at Brundage. The American GFS model is bullish for Sun Valley (2 inches at press time) for another 5-10 inches. The Euro is less optimistic (3-7).  The summit of SV will ski well by late Wednesday especially if the GFS proves correct.

For Colorado, the highest amounts per my forecast yesterday are likely in the northern mountains.  Steamboat may grab double digits by Thursday morning.  While the models are not optimistic for the I-70 corridor, its likely that this system will over perform due to NW Flow and some sneak up surprises on the western side of the corridor. I would favor areas north of I-70 near Rabbit Ears Pass (9-15) followed by I-70 from Copper to Beaver Creek (4-9).  While the northern mountains are favored, Telluride will sneak in 4-6 inches due to favorable wind directions.  Further east on the I-70 corridor will see less snow, however Breckenridge often over performs all odds of the models with NW winds (Wildcard).

Below: Total snowfall through Thursday morning. Colorado may outperform the models. 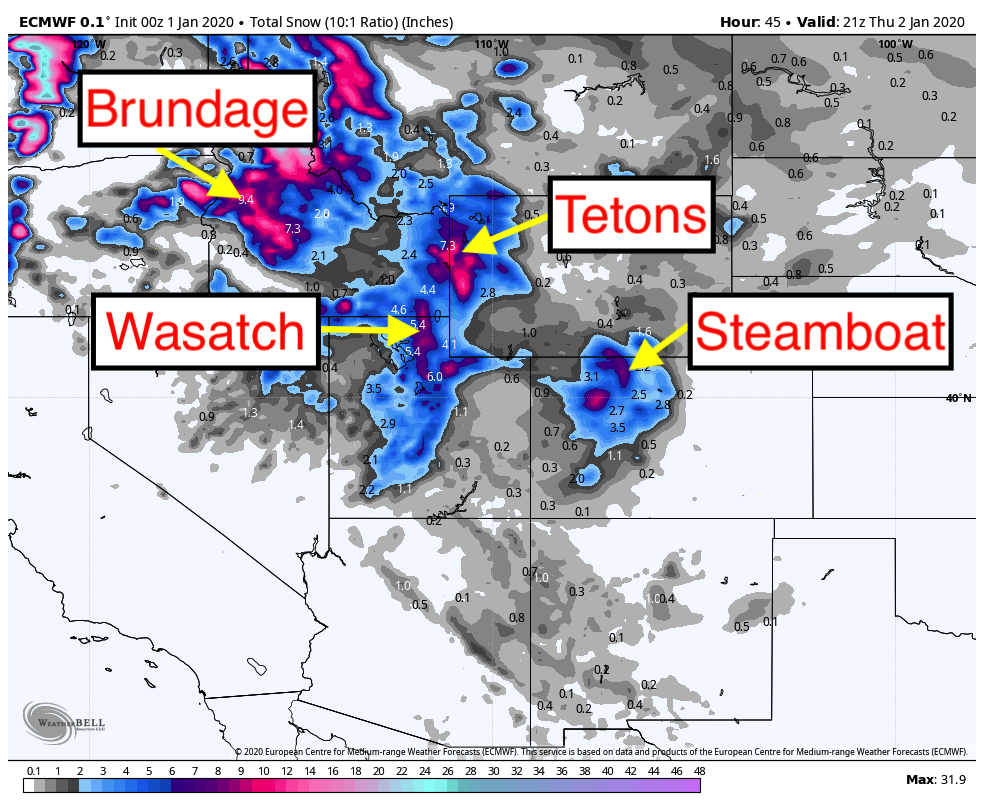 The Pacific Northwest will finally get colder by Saturday.  Heavy snowfall is likely for the Cascades of Oregon and Washington.  That system will weaken as it moves east late this weekend or early next week.  It will favor the northern Rockies (Not confident on amounts as the trough is weakening)

Below: Trough takes aim at the PNW and tracks over the northern Rockies albeit weakening this weekend and early next week. 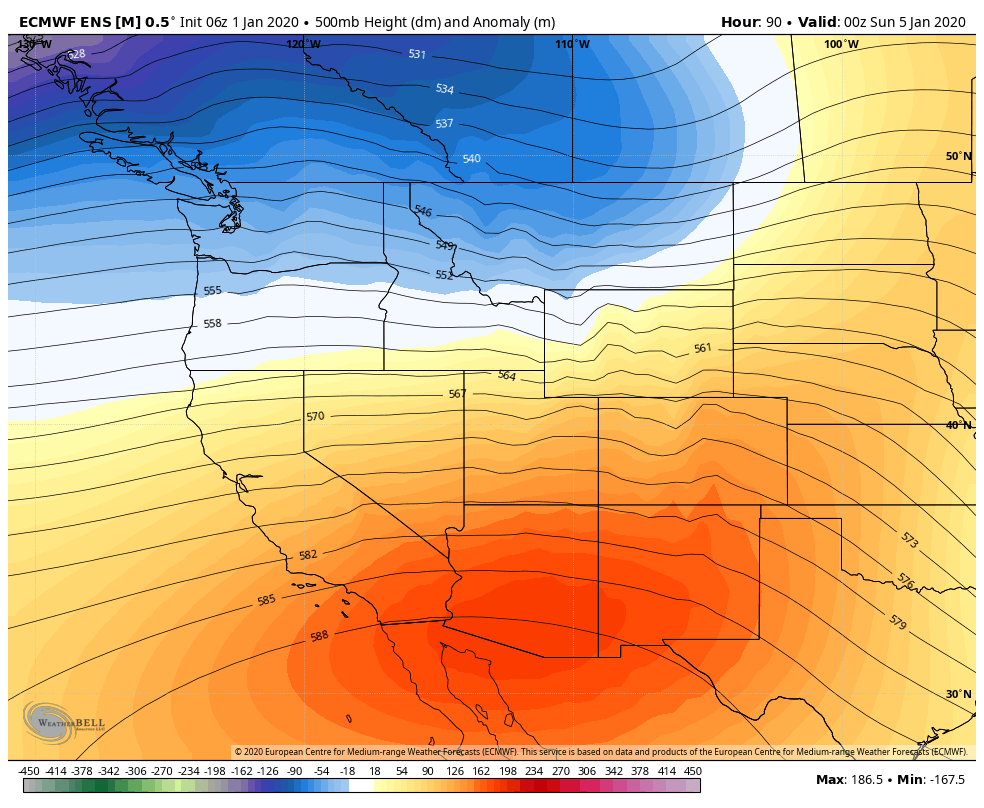 Below: January 7-8 timeframe may see another decent system for the PNW and Rockies. Its too far out for confidence. 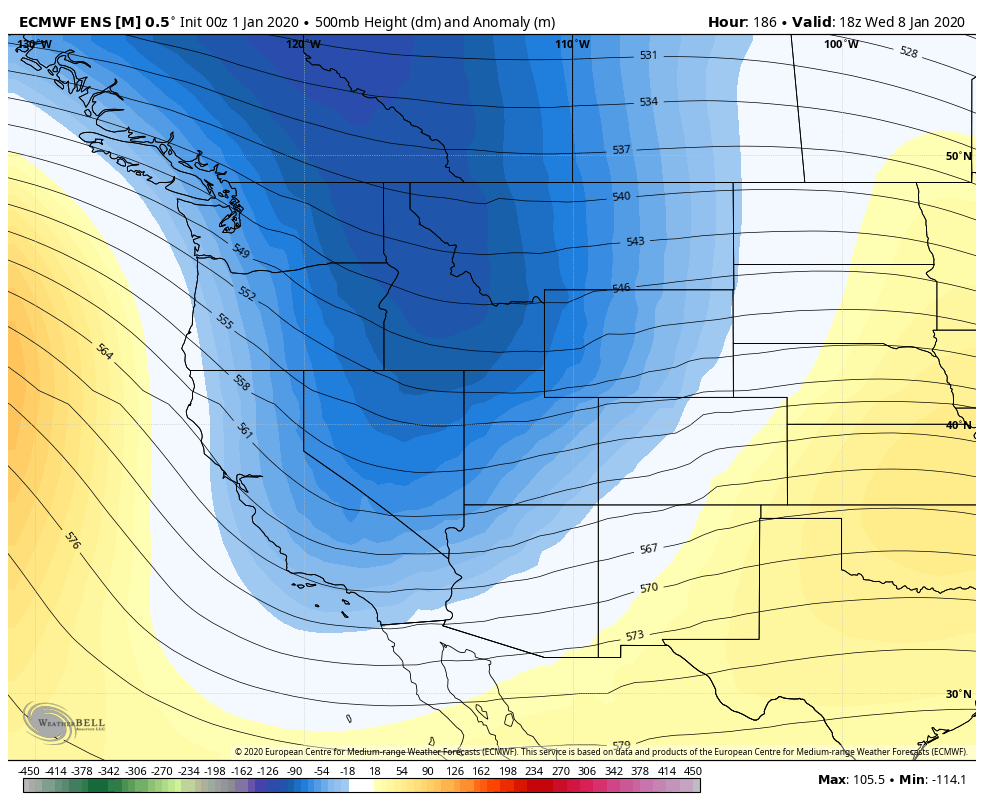 I am in BC this week Heli skiing at Mica so my posts will be limited. Enjoy the powder everyone