Feet of Snow For Canada To Ring in The New Year

Feet of Snow For Canada To Ring in The New Year

Complicated forecast due to fluctuating temps in the Pacific Northwest (Atmospheric River), with cooler conditions inland. Interior BC is going to get nailed with FEET of snow this week. The action moves into the Panhandle of Idaho, Montana, Wyoming, Utah, Idaho, and Colorado for New Year’s producing 12 inches plus for many areas. Snow will linger after New Years Day in the Rockies.

Below:  Low pressure digging into much of the west Midweek. BC will see the brunt of the trough however areas of the Rockies will score for New Years or the following day. 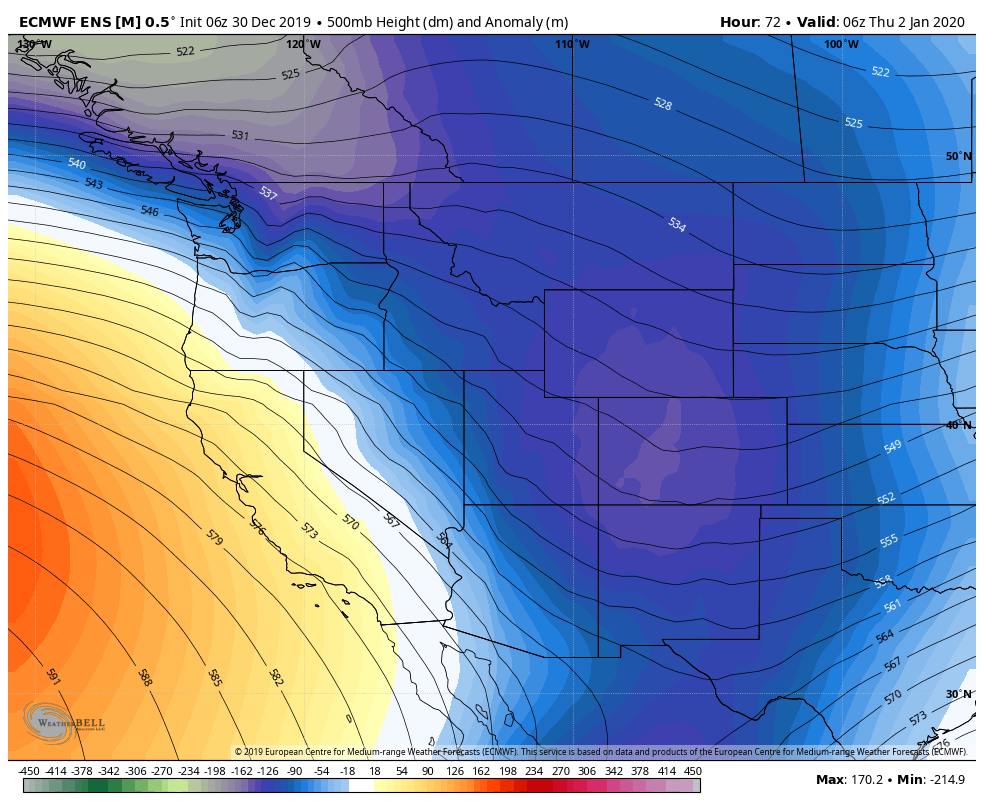 The deepest snow totals this week will land in the interior of BC where several feet will fall from Monday night to Wednesday.  Consider Revelstoke a bullseye with significant snow falling north/south (2-4 feet at upper elevations). Southern BC may see slightly less the further east you travel but will score well just above the Idaho border.  Temps in the southern areas may provide less optimistic riding conditions at lower elevation resorts near the Idaho/Montana border.

The Pacific Northwest grabs an atmospheric river of systems pre New Year’s with warming temps (5500-6,000 feet) before dropping to 3500 late.  Therefore, expect mank, rain, upper elevation snow in the short term followed by a cooling trend and some light snow for New Years.  Whistler may stay slightly cooler so the summit may see some significant snow with mixed conditions elsewhere. Further inland will be cooler so the Panhandle of Idaho, perhaps Schweitzer may be a better option New Years Day.

In the Rockies, snow will be falling over much of central Montana and Idaho (Montana Snowbowl, Brundage, Tamarack) New Year’s eve (Decent amounts).  The Tetons find New Years Day as a good storm ski day (5-10) followed by another decent dump into January 2nd.  Total snowfall in the Tetons should exceed 10-18 inches by Thursday morning.  The Wasatch will see some light accumulations by New Years Day followed by moderate amounts by your last chair Wednesday. (Storm ski, intensity increases mid-morning). Colder temps and NW flow over Utah will ramp up snow showers that will likely continue into Thursday morning.   Bottom Line:  The Tetons may be deeper for New Years where the Wasatch may be a better choice for January 2nd (Tough call). Totals in both areas may exceed 15-17 inches.  The highest amounts will fall in the Cottonwoods and perhaps north into Powder Mountain or Beaver that can do well with NW flow.  Park City resorts should exceed 9-12 inches by Thursday. 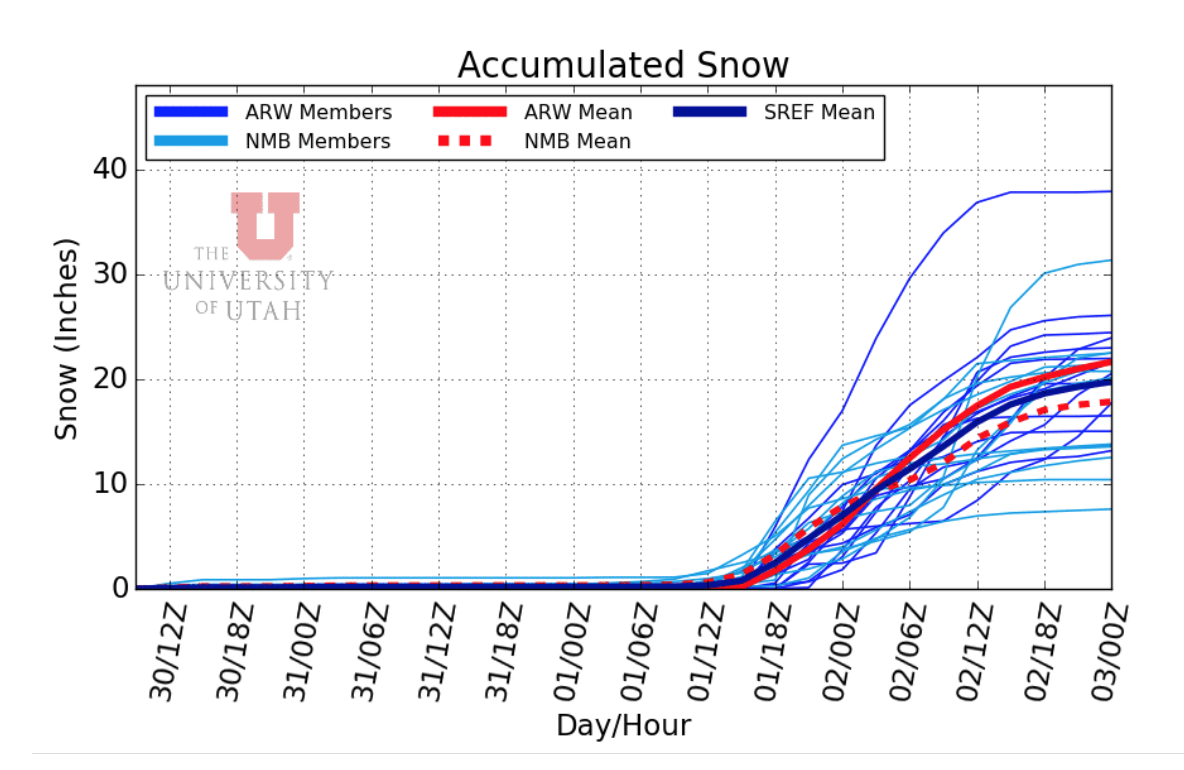 Below: University of Utah SREF Plumes providing averages of total snowfall from multiple models at Jackson Hole Mountain Resort summit through January 2nd. The consensus is not as tight as the above SREF plumes however my confidence is very high for 10-18 inches for JHMR and Targhee for New Years and the following day *(total).

Colorado scores leftovers for late New Year’s, into January 2nd.  Currently, I am most optimistic in areas north of I-70 (Steamboat might score) with more moderate amounts along the I-70 corridor.  January 2nd will be a powder day for Colorado with a moderate event for many areas favoring the north-central mountains.  Double digits are not coming with high confidence initially Thursday morning with the exception of Rabbit Ears Pass or the upper elevations of the “Boat”. Snow showers will continue into Friday.

Below: University of Utah Plumes for the summits near Steamboat (Tower Snowtel) through January 2nd.  Not as much confidence in amounts with some hints of double digits for Thursday morning (6-12 is a likely forecast). 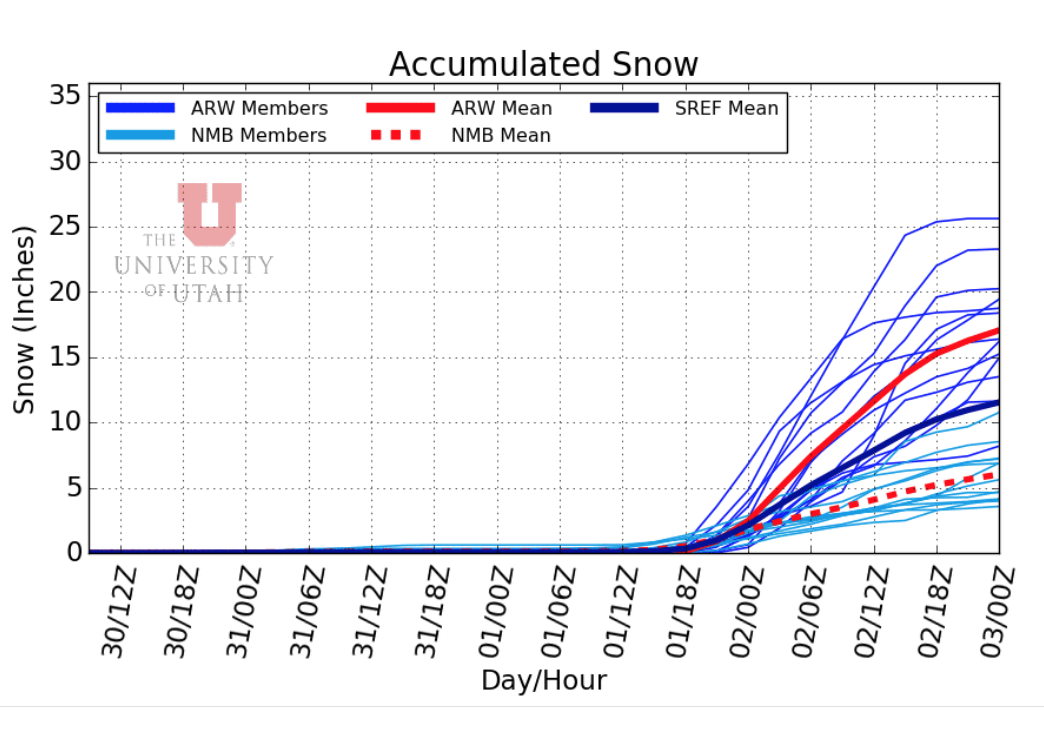 Elsewhere in the Rockies, southern Montana may ramp up on New Years with 5-10 inches possible.  Further north may see less.

Below: Total snowfall for the west through January 2nd. Rain is likely at lower elevations of the coastal region resorts of the PNW (Green) while snow will be falling further inland. 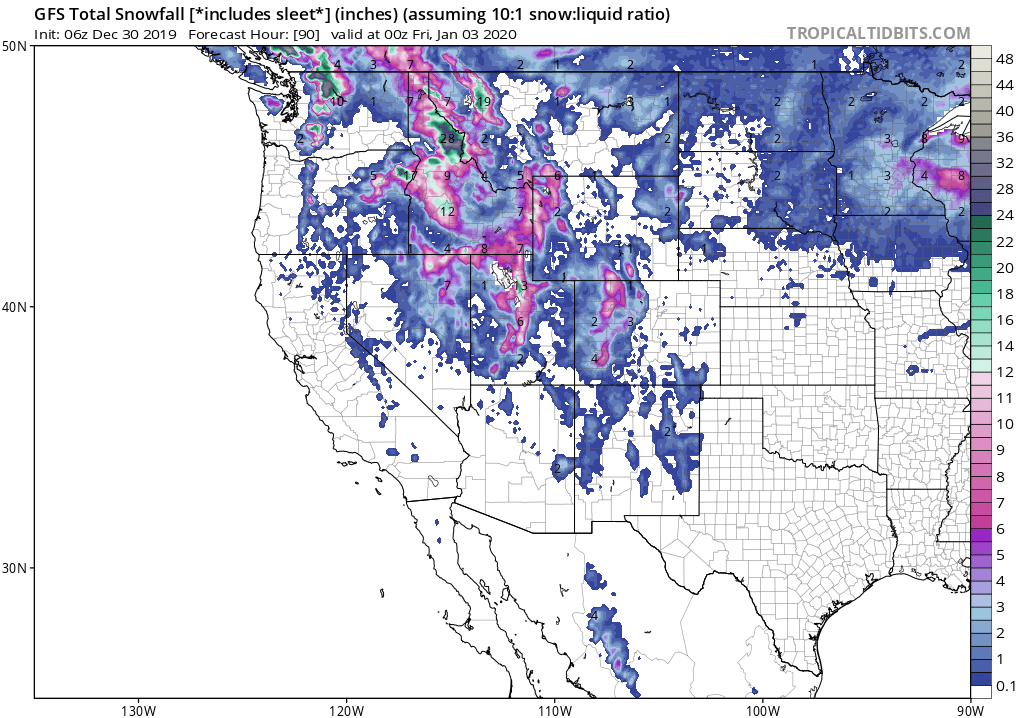 A cooling trend for the Northwest this weekend will improve conditions, lower snow levels with a glimmer of hope for some deeper quality snow (Cascades of WA and OR).  That colder air brings another round of snowfall to BC favoring the southern zones (Fernie could score), Panhandle of Idaho, Tetons, Wasatch and eventually Colorado early next week.  The northern Rockies are favored so areas in Montan, Wyoming, Idaho, may be favored slightly over the Wasatch.

Below: GFS ensembles showing another trough moving into the BC, PNW, northern Rockies early next week. This system is colder and will produce snowfall at lower elevations. 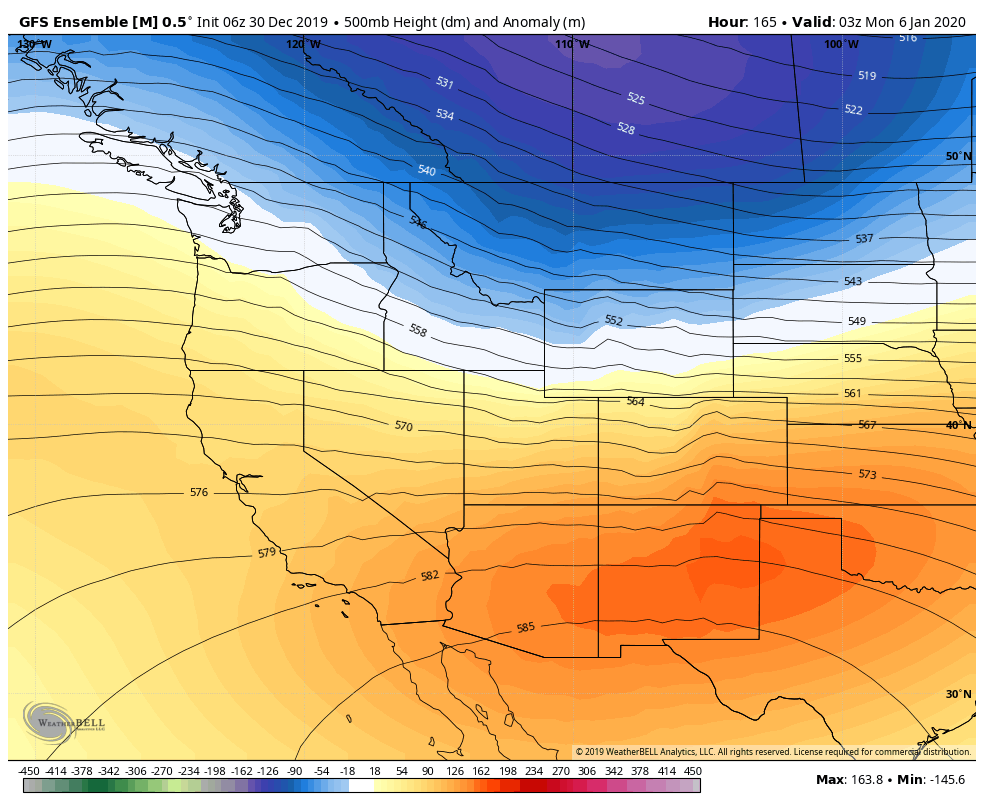