There are 2 systems to talk about. The first will impact southern California today (Southern Sierra) and quickly blast though AZ, CO, and UT tonight and Thursday. A significant system will follow this weekend for the Sierra with pieces of energy filtering into the Central and Northern Rockies late this weekend into Monday. BC- North Cascades, Northern Montana (Glacier) are also grabbing snowfall this week.

If you need a powder fix now, consider some light or moderate snow for areas in the southern Sierra (Mammoth) that will be falling during the afternoon Wednesday to Thursday (3-6). That system quickly pulls into southern Utah and Colorado Wednesday night into Thursday morning. Southern Utah mountains might see 5-9 inches while areas closer to I-80 could grab 2-4 inches primarily early Thursday morning. Big Cottonwood does best with SW flow and areas further north or east will only see 1-2 inches at best.

The Sierra is currently in decent shape with more terrain opening each day at many resorts. Upper mountains are slowly opening so by the weekend or certainly, shortly thereafter a decent amount of terrain will be open at nearly every resort.   The next storm system favors the Sierra Saturday (Storm Ski) with moderate to strong winds (65 MPH gusts).   Snow levels meander right at or slightly above lake level so slush may be the best way to describe your commutes this weekend, with snow as you approach 6-6500 feet.  Most ski areas will see primarily all snow but amounts may vary considerably depending on elevations. 7-28 inches will be likely at most resorts (The wide range due to warmer temps at lower elevations). Slightly cooler air might lower snow levels just a bit for Sunday where snow continues.

In the Rockies consider the Tetons, Wasatch, or Colorado for the latter half of the weekend into early next week. The models are not in agreement for amounts!  The GFS is pretty bullish for 10-14 inches or more for the Tetons and Wasatch Saturday PM to Monday AM. Peak snowfall will be late Saturday to Sunday in the Tetons with the Wasatch a bit slower (Sunday storm ski) into Monday (Late Sunday or early Monday might be your best turns in Utah).  The Euro is the pessimist showing less snow (4-9). Therefore, I ran the Canadian model today which is onboard with the GFS (Bullish).  My best guess for the Tetons and Wasatch is 7-12 inches with a possibility of higher amounts. I like wind directions!  West initially will favor the Tetons late Saturday into early Sunday with a shift to the NW being good for northern Utah on Sunday or Monday.  Targhee can also do well with NW winds.

In Colorado, moisture develops late Saturday night and peaks on Sunday-Monday.  The winds are going to westerly which favors the western corridor.  6-11 inches will be possible for Crested Butte, extending up to Aspen and Steamboat who may see slightly lower amounts. Further east towards Summit my early guess is 3-7 inches for late Sunday (Storm ski) or early Monday. Eagle County especially Beaver Creek may see higher amounts.  That is likely to change as we get closer, especially since the models are not in synch.

Other notable winners could be Glacier National Park (Tease for Whitefish) with heavy snow this weekend. Also, finally Whistler, but especially the interior of BC will be grabbing decent snowfall on the latter half of this week. The northern Cascades are also likely to see some snowfall this week. Also look for central Idaho, perhaps Brundage to score some powder with the westerly winds and moisture on Saturday/Sunday.

High Pressure takes hold early next week with the models showing a return of low-pressure troughs likely impacting the Pacific Northwest and northern Rockies beginning mid to late next week.

Below: Ensembles showing a likely return to somewhat unsettled conditions mid or late next week. 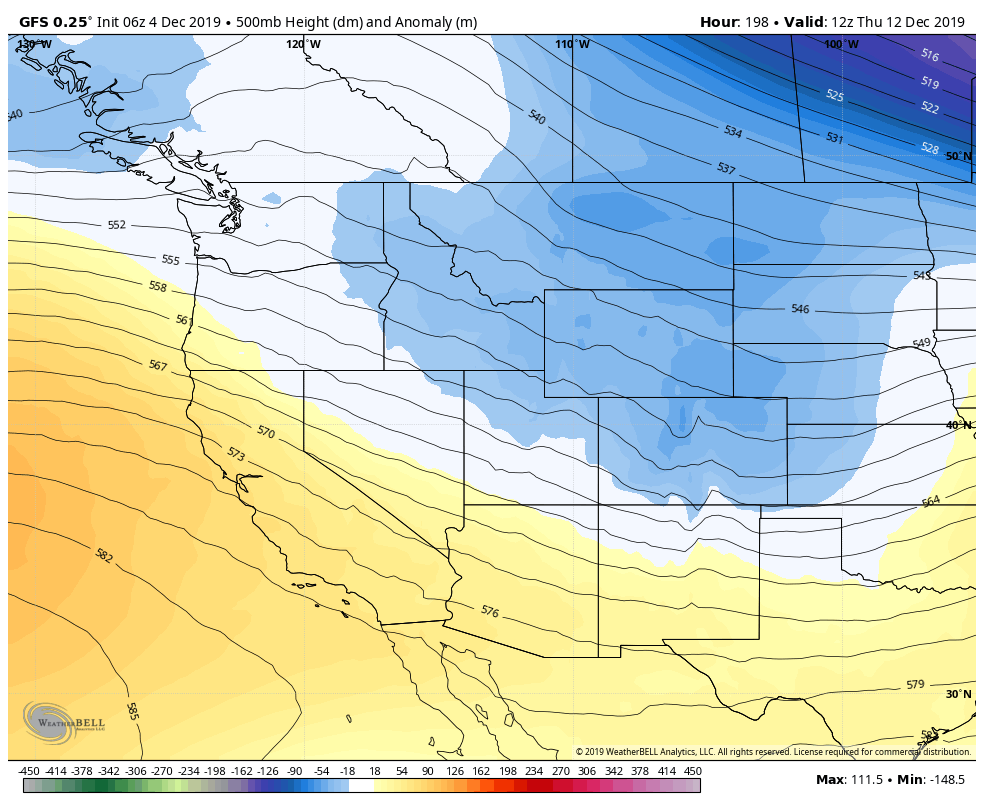 Enjoy the Pow everyone!  Please comment if you are on the chase!  I also like to get reports on conditions if you have any while skiing or after.