In the short term, a moderate event is shaping up for southern California brushing Mammoth today through Wednesday.  That system quickly moves into the 4 corners scoring moderate powder for the Arizona Snowbowl Wednesday night (4-8) and into southern Utah and Colorado for Thursday morning. Thursday will be a powder day for most of western Colorado favoring resorts from I-70 and south.  Winds will shift to the west behind the front which could fare well for Crested Butte, Beaver Creek and most of the I-70 corridor.  Mountains.  The Euro shows the system further north impacting resorts further north (Including Steamboat, Winter Park, Eldora, Rocky Mountain National Park) while the American GFS model from I-70 south.  My gut tells me that all ski areas will be reporting new snow Thursday morning with the highest amounts found from Purgatory, Telluride, and Crested Butte, followed by the I-70 corridor.  Wolf Creek may see slightly less than its neighbors to the west.  Amounts:  5-8- southern mountains including CB, with 3-7 inches along the I-70 corridor and perhaps north. Areas further west towards Beaver Creek may see the higher end.

Significant snow will once again be falling over the Sierra this weekend.  Quality will be better than the last storm. Winds may not be an issue either.  The forecast from yesterday is on track with the exception of timing.   Models have slowed the incoming system into the Sierra to late Friday night (Start) ending late Sunday.  This provides a longer duration of moisture for most of the Tahoe and Mono County basins and decent cooling through the weekend to offer decent quality medium density powder.  Bottom Line: Storm ski Saturday/Sunday and look for new terrain openings on Monday.  Amounts:  15-28 inches favoring perhaps the central and northern regions (Highest amounts along the crest from Squaw to Kirkwood).  Mammoth be close behind.  Clearing skies will be likley on Monday.

Ripples of energy split from the main low further north in Oregon sending waves of light to moderate snow over central Idaho and western Wyoming beginning on Saturday.  Steady light to moderate snow seems to favor the Tetons Saturday/Sunday that is likely to bring 5-10 inches to most mountains late this weekend.  Additional snow will fall Sunday night and Monday bringing totals into the 10-16 inch range by Monday afternoon for the Tetons. Moderate snow will also be falling over Big Sky, Red Lodge Mountain and perhaps Bridger as a wildcard further north. Central Idaho resorts such as Brundage may also do well.

Below: University of Utah Atmospheric Science Plumes showing an average (Dark blue line)  of 10-20 inches for Jackson Hole through Monday.  This model (NAEFS) is often overdone so amounts may trend somewhat lower.  There are however plenty of model runs showing higher amounts showing some uncertainty and the chance for greater than 20 inches. 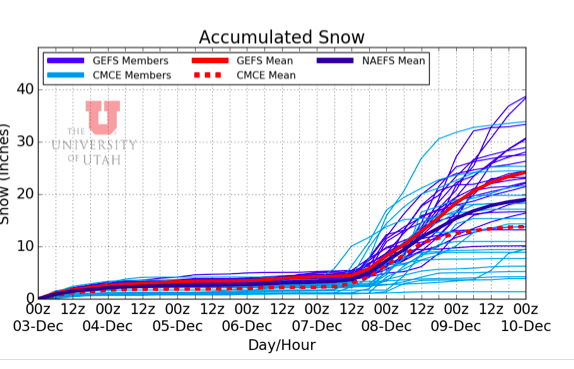 The Wasatch gets a slower start Saturday night/Sunday with the best orographics coming late Sunday and Monday (Winds shift to the NW).  Amounts will be moderate at most ski areas in northern Utah (5-10) with higher amounts for the Cottonwoods especially Monday morning. It’s a bit early to speculate on exact totals. I would not be surprised to see 10-18 inch storm totals in some spots by Monday mid-morning in the Cottonwoods (Storm total from Saturday PM to Monday AM).   Amounts will be adjusted as models have better consensus. Most mountains in Utah will score decent powder late this weekend (Beaver, Park City, Powder Mountain, Solitude, Alta).

Colorado gets the initial action Thursday (Mentioned above) with the next storm beginning on Sunday.  The best time to ride powder in Colorado will be Monday morning (storm ski) with some snow continuing into Tuesday.  The highest amounts will favor the northern San Juan range (Telluride) to Aspen followed by the western areas of the I-70 corridor.  Steamboat could also score deep amounts.  Ranges will be from 6-12 inches in many areas by late Monday.   This system will bring moderate or heavy snow to most of the mountain ranges with very few getting left out.  It’s too early for high confidence on amounts so these will be adjusted as we get closer.

Below: You can see the highest totals in the Rockies by Monday mid-morning over the Tetons, Wasatch and western areas of Colorado (Bullseye is over Crested Butte or Aspen).  Snow will continue to fall into Monday night in most of Colorado so amounts may uptick somewhat for Summit County later in the period 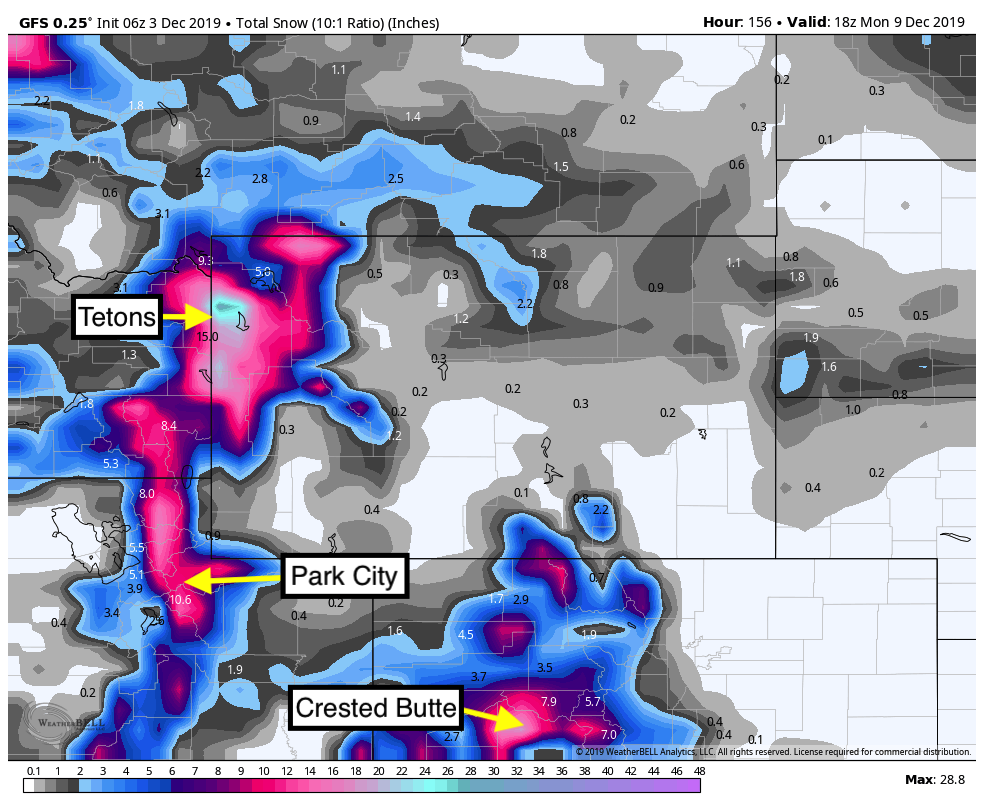 Enjoy the anticipation of powder everyone!   Get your Snosharks now so you will have them to quickly clean off your cars on the chase.  This is the tool that we endorsed at Powderchasers.