Moderate To Heavy Snow For Canada and PNW This Weekend.

Moderate To Heavy Snow For Canada and PNW This Weekend.

The trend will be for a teasing storm to move quickly though most of the Northern Rockies with light snow late this week/weekend. The Pacific Northwest gets very wet late by Friday. BC may get very deep by Sunday at upper elevations! Another storm moves into the Rockies and Pacific Northwest towards the middle of next week.  New England performed as forecasted with double digits being reported at Jay Peak (12 Plus late Tuesday) We don’t have any other reports this morning but suspect amounts are lighter the further south you traveled.  In New Hampshire amounts at Cannon were 6-7 inches Tuesday morning.  Sunday River opens this Friday and grabbed 6 inches which was inline with our forecast.  In the West, the high-pressure ridge is slowly breaking down.  Sign up for our custom Powder Concierge Service or make a donation of $75 or more and receive a discount code for $75 bucks off a Mountain Collective Pass.   UPDATE – Jay just reported 21 inches in 24 hours!

The major benefactors this week will be most of British Columbia with Copious moisture aimed at both coastal and interior regions this weekend. It’s likely that moderate to heavy amounts of snowfall at the summits of some of the interior BC resorts by late Sunday. Most of the deeper amounts will be found at the summits.  Much less snow will fall below mid-elevations.

Snow will also be falling at the summit of Whistler this weekend. Temperatures are not overly cold, so snowfall will be confined to upper elevations in BC.  Rain is likely at lower elevations.  While Alberta scored the highest totals last weekend, this storm favors BC with Alberta grabbing lighter amounts.  The Cascades will likely see rain/snow,  elevation-dependent favoring the northern regions beginning on Friday (Decent moisture). It’s a relatively warm storm.

Cooler air from Canada moves through the Rockies this weekend with light snow favoring Montana, Tetons, and Colorado (Saturday-Sunday).   Amounts don’t look very impressive but areas that have not seen snowfall in several weeks will be reminded of winter.   Utah is likely to be on the backside of most of the energy this weekend but may sneak out some flakes on Saturday (Very light snow)  If you are in Colorado aim to ride during the day Saturday or Sunday for some light coatings softening things up somewhat for the weekend.

Below: Cooler air drops south into the central Rockies by Saturday. 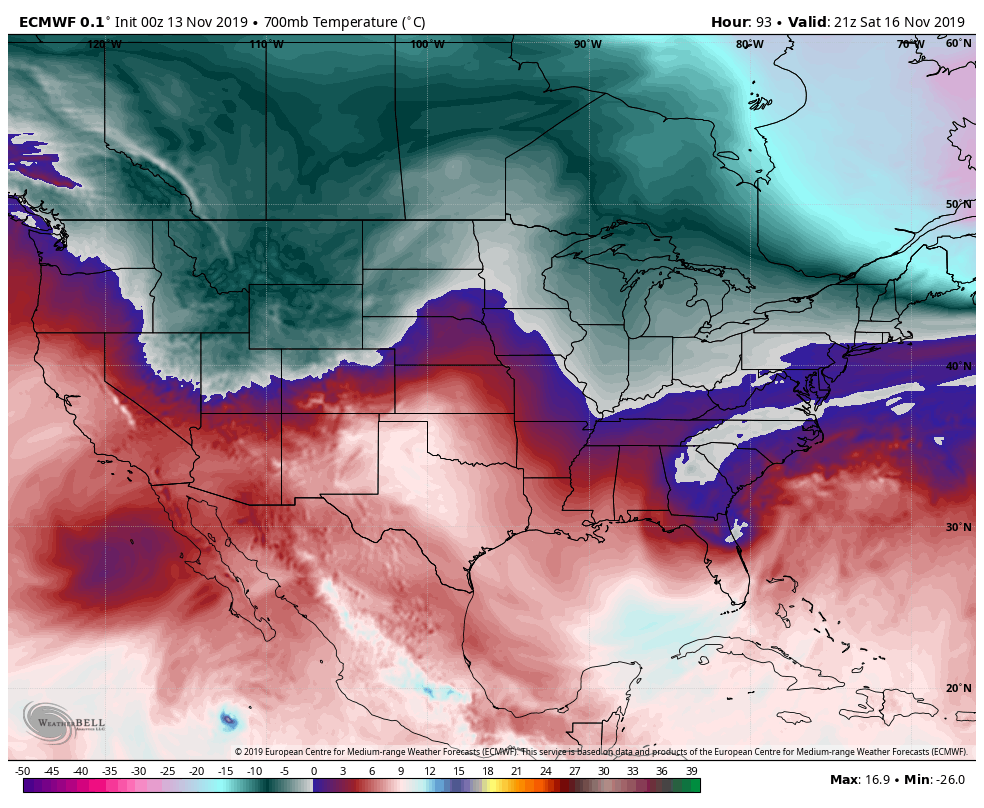 Below: Total moisture for the West through Saturday morning. Significant rain/snow for the PNW, and Canada with snow levels on the high side keeping most significant snow at upper elevations. Light moisture depicted in the Rockies for many areas for the weekend. 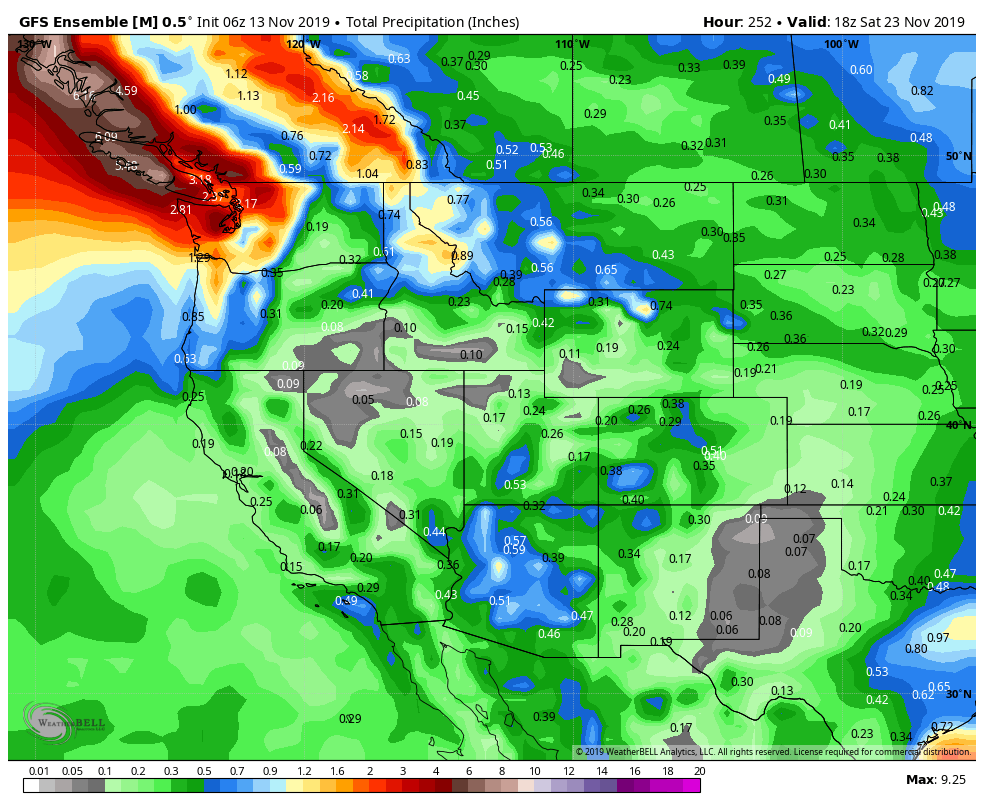 The ridge continues to slowly weaken in the west.  Another trough of low pressure moves into the west midweek.  That is likely to be a bit stronger for the Pacific Northwest Tuesday and the Rockies mid next week.  This may drop better moisture over a wider area of the west.   Utah, Wyoming, and Colorado may be in the hunt for some moderate snow,  7 days out it’s just in the realm of confidence.

Taking a look at the week of  Thanksgiving (Low confidence in models that far out, but I am going to speculate), it appears to be an active weather pattern.  Let’s hope the models hold up!

Below:  We shouldn’t be posting maps for Turkey Day this early!  Low pressure is possible in many areas of the west.  I’m still holding hope for the Sierra.