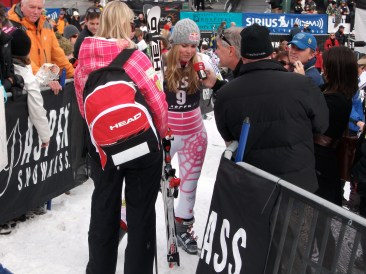 If there’s one thing we know Lindsey Vonn hates– it’s not being able to compete in world cup races.

Those feelings aside, Vonn felt the need to back off a recent world cup race in Switzerland due to dangerous conditions and course setup and even went so far as to try and convince race officials to call off the event reports the Merced Sun-Star. The absent Vonn was joined by a few other US Ski Team members including slalom star Mikaela Shiffrin and Laurenne Ross, all of whom considered the race conditions too dangerous to compete.

“Due to conditions, we weren’t comfortable with the amount of risk our athletes had to take to push to be competitive” – Paul Kristofic, U.S. Ski Team Women’s Head Coach

During the event, Denise Feierabend, Ilka Stuhec, and Tessa Worley all crashed at nearly the exact same spot on the course. Feierabend would not be able to return to the event due to an injury sustained in the super-G.

FIS Women’s World Cup official, Atle Skaardal defended the course saying it was simply the wrong line choice that resulted in the women crashing. Vonn fired back saying that after a forerunner crashed, race organizers should have canceled the race. Warming temps reportedly caused the course conditions to be less than ideal. The world’s winningest female skier went on to say that she was not “complaining” but instead putting the skier’s safety first by expressing her viewpoint.

Well that's enough. I'm not racing today. This is not safe. Please stop this @fisalpine

Lowering the start was a good move. However, I don't think it will change much. Snow is too soft. Sad for #Denise who can't restart 😔

I didn't race because I thought the conditions weren't safe.It has nothing to do with wanting to race the men. Safety should be the priority https://t.co/xKMPNgXY1m

The Norwegian race official lambasted the US Ski Team for expressing its opinion as it pertains to course conditions telling the AP, “Some of these words, especially by the U.S. team, is inappropriate and should be reviewed.” The US Ski Team head coach defended his skiers saying it’s their choice whether or not to race. Lindsey Vonn Skis Under The Midnight Sun In Iceland