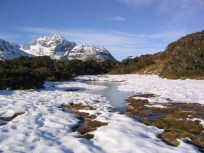 In a story that is as harrowing as it is tragic, a silver lining is emerging as one woman recovers from frostbite and hypothermia after surving her husband in the New Zealand backcountry earlier this month.

Two days into what is normally considered a three-day trek, a Czech woman witnessed her husband fall to his death on the Routeburn Track. She would later struggle to survive in the wilderness for nearly a month reports Sky News. The woman, who has yet to be identified, was stuck in the freezing cold for days before finding and breaking into a nearby hut where she found safety. Avalanche conditions were spiking and the woman sought refuge in the hut, a decision that inspector Olaf Jensen says was extremely wise.

“Given her experience and the avalanche risk, she decided it was best for her safety to remain in the hut, and that was the correct decision to make.” – Inspector Olaf Jensen (*Quote courtesy of Sky News)

There was likely firewood and leftover food in the hut in which the woman sought shelter. Luckily, the Czech consulate ultimately alerted New Zealand officials. She was rescued yesterday. Authorities will attempt to recover the body of her husband in the coming days.