With Memorial Day and the summer season just hours away, our National Park Service is about to become inundated with people for the next four months.

Related: Bison Attacks Tourist Taking A Selfie With It

So in anticipation of summer tourists taking selfies with Bison, people throwing rocks off the rim of the Grand Canyon, and boy band morons desecrating pristine hot springs, we wanted to provide the reading public with some info that will inspire respect for the NPS and the servants who uphold its ideals.

3) Over 307 million people visit our national parks and monuments each year! 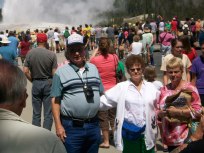 5) The highest peak in the United States is the 20,320′ Denali that lies within Denali National Park.

7) The National Park Service looks after approximately 18,000 miles of trail (that’s 3/4 of the Earth’s circumference!)

9) Crater Lake in Crater Lake National Park is the deepest lake in the US at 1,943. (That’s enough to sink the entire One World Trade Center!)

10) Wrangell St. Elias National Park in Alaska is the biggest chunk of land under the NPS’ watch at 8.3 million acres. That’s bigger than each of the 9 smallest states in the country!