5 People All Ski Bums Hope To Share A Chairlift With

5 People All Ski Bums Hope To Share A Chairlift With

Chairlift company is key and during the holidays it can be hard to come by.

However, you might find yourself in the singles line and lo and behold, you’re sharing a chair with an absolute LEDGE. This is common in ski towns and presents a once (or twice) in a lifetime opportunity to pick the brain of someone who’s been there or simply share a few light words with someone you take seriously.

*Whatever the case, enjoy the company and don’t forget to tell your bro’s who you rode a chairlift with today.

5) Benny Wilson AKA ‘The Captain’

Cofounder of the Jackson Hole Air Force, Benny Wilson is a character to say the least. He might be humming some 70’s classic rock jam under his breath or asking you where you’ve been skiing but no matter what, riding with the denim clad captain is an experience every ski bum should hope to have. Being given a patch at the same time– That’s what dreams are made of.

Schmidt. That name is a part of every ski bum’s vocabulary and it’s normally used in conjunction with silky smooth jump turns, finesse, and style. Not to mention, if you’re skiing at Schmidt’s home mountain, “The Yellowstone Club” chances you’re lucky to begin with. So hop on that lift and ask Scot what skiing Chamonix in the 80’s was like…

Ski bums dream about skiing, and many of those dreams include skiing like Candide. Plain and simple, he’s the best skier on the planet and who doesn’t want to ride a lift with the best skier in the world? 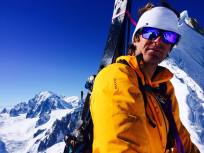 During the early season, Seth rides lifts and does laps at Loveland Ski Area. It’s common to see one of skiing’s biggest superstars making tons of turns and simply dialing it in for big lines in Chamonix and Alaska later in the season. So if riding next to the huck master himself doesn’t tickle your fancy maybe you should ride this one solo dolo.

Skiing’s original bad boy and renegade, Plake is an icon of the sport. From 80’s hotdogging style to modern ski mountaineering, it’s as though Plake has mastered almost every aspect of freeskiing since starring in the best ski movie ever made, The Blizzard of Aahhh’s

. Not to mention, who doesn’t want to sit on the chair and critique mogul style next to one of the sport’s most outspoken characters?