Summary: Chases will be tricky in the next 7 days with virtually everything Mother Nature has thrown at us. The PNW could be really good today (Friday) before things warm up for the weekend. The Sierra grabs an atmospheric river next week that moves east. We are about to go from super cold to a warmer but wetter pattern into next week. Some areas will be reporting several feet of snow at upper elevations.

Thursday was a transition day with ski areas digging out sidelines and recovering from 15 hours of winds from 60-100 MPH in the Tetons and Wasatch. In Utah, Snowbird kept the upper mountain closed all of Thursday. that will pop today. Keep your expectations low with wind-blown snow and cream a solid bet. There will be pockets of really good skiing on the highly wind-protected areas that face SE.

Light freshies are on the models for much of the Tetons, northern Colorado, and Wasatch range Friday/Saturday. Freshening appears to be in the 1-4 inch range for these areas through Saturday morning. Some additional snow showers are noted for Colorado Sunday/Monday with the best odds of another 2-4 inches for Winter Park, Eldora, Steamboat, and Berthoud Pass. Bottom Line: New openings from terrain closed on Thursday. Light freshening for the Northern Rockies including Wyoming, Utah, and Colorado through Saturday. Warming trend.

Meanwhile, today is the last day to catch a relatively cold storm just now getting underway in the PNW. Snow is falling in the Cascades with easterly flow keeping the ranges of northern and central Washington very cold. Expect 4-8 inches Friday with additional moderate wet snow or rain into Saturday. Temps will be warming during the event (Might feel a bit upside down). Bottom Line: Ride Friday for good quality freshies from 1st chair to last. Sleep in Saturday with wet snow or rain and primarily rain at mid and even upper elevations by Sunday. Note: Baker has 4 inches as of 6 AM PST and it is 30 degrees. Stevens has 2-3 inches and it is – 1. That cold interior easterly flow is keeping very cold temps trapped at the surface. Rain will be falling nearly everywhere in the Cascades by Saturday late AM and most of Sunday.

New England: Hopeful evening with up to 7 inches at Killington all turning to rain on Friday. The temps are not cooperating. Boo Hoo. Another bust!

Geez, there just isn’t a ton to talk about so let’s skip to the extended forecast.

Searching for deep powder in the west won’t be difficult next week. Searching for high-quality will be a challenge initially. A parade of storms will enter the PNW beginning Tuesday with mid to upper-elevation snow. Snow levels appear to be near 4500 feet in the Cascades. Temps cool a bit Tuesday night into Wednesday with additional significant moisture likely. It’s possible that some very hefty totals measured in several feet fall by mid-next week. It’s hard to say how things will ride with rain this weekend and a mixed bag by Tuesday. There is hope that the wet snow Tuesday with a cooling trend Tuesday night brings some decent deep turns by Wednesday. Cooler temps and some additional moisture are likely for the Cascades late next week. The northern portions of Idaho near Sandpoint (Selkirk Powder Guides) might score decent totals with this pattern! Also, inland BC will likely do well, and slightly cooler, however lower elevation resorts.

The Sierra will make the headlines with an Atmospheric River bringing copious amounts of rain to lower elevations and significant snow totals from mid or upper elevations, The models bring the main event in late Tuesday night. The European model shows snow levels in the 7500-8,000 range Tuesday dropping to near or just above the bases for Wednesday (6K). The American model disagrees with colder temps and lower snow levels (5K feet), especially Wednesday. The main takeaway is to be prepared for strong winds, rain initially Tuesday, with a mixed bag or all snow by Wednesday. Upper elevations might score significant snowfall. A cooling trend is likely late Wednesday or Thursday. 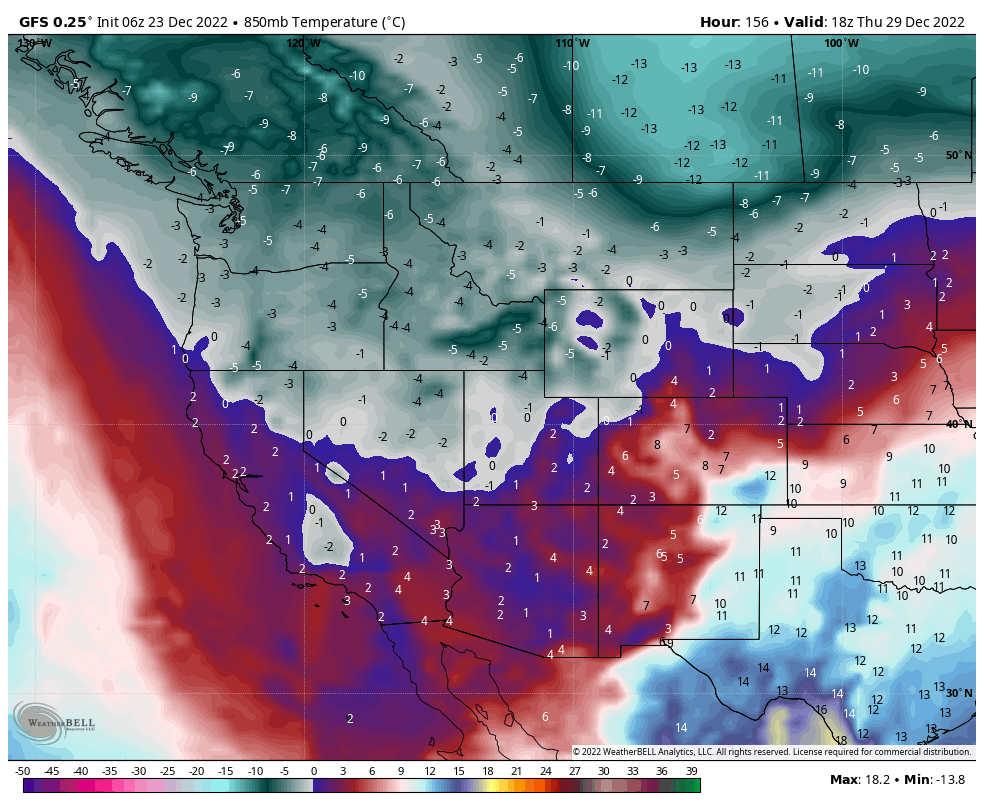 Below: The European model is showing warmer temps hanging on longer for the central and southern Sierra through Thursday. Map: 4800-foot temps (3-7C). 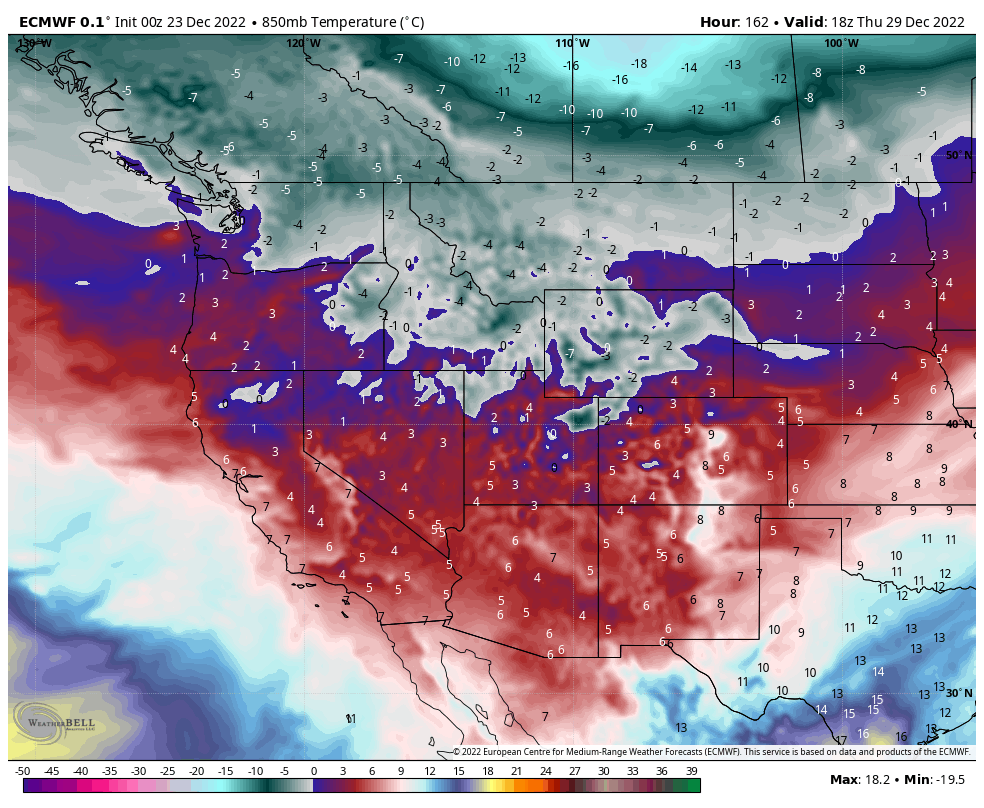 Moisture streams north under S-SW flow with target areas being most of central Idaho including the McCall areas mountains, and the Sawtooth Range. Sun Valley is a wildcard for deep snow on Tuesday night or Wednesday. The Tetons and Wasatch will do well with decent moisture and temps on the warm side (Medium to dense snow) from late Tuesday to Thursday. Winds will be an issue early in the storm cycle. Looking at wind direction, SW, veering due North, and eventually NW by late week. It’s a bit of a gamble on totals (Northerly winds are not ideal for the Wasatch) with perhaps a good surge initially under SW flow (Wind and warmer) with snow decreasing by Thursday under colder NW flow. This storm has the potential to bring decent moisture to many areas of the west. Caveat: Winds initially, warmer temps, wind shifts, a bit hard to nail down numbers. Look for Powderchasers updates.

Below: Total Moisture looks impressive for much of the west through next Friday morning (December 30th), especially in coastal areas, PNW, and Sierra, extending into Idaho, BC, and eventually the Tetons, Wasatch, and 4 corners. The challenge will be finding the colder air, riding higher elevations, and avoiding the very windy initial phases of the main event. 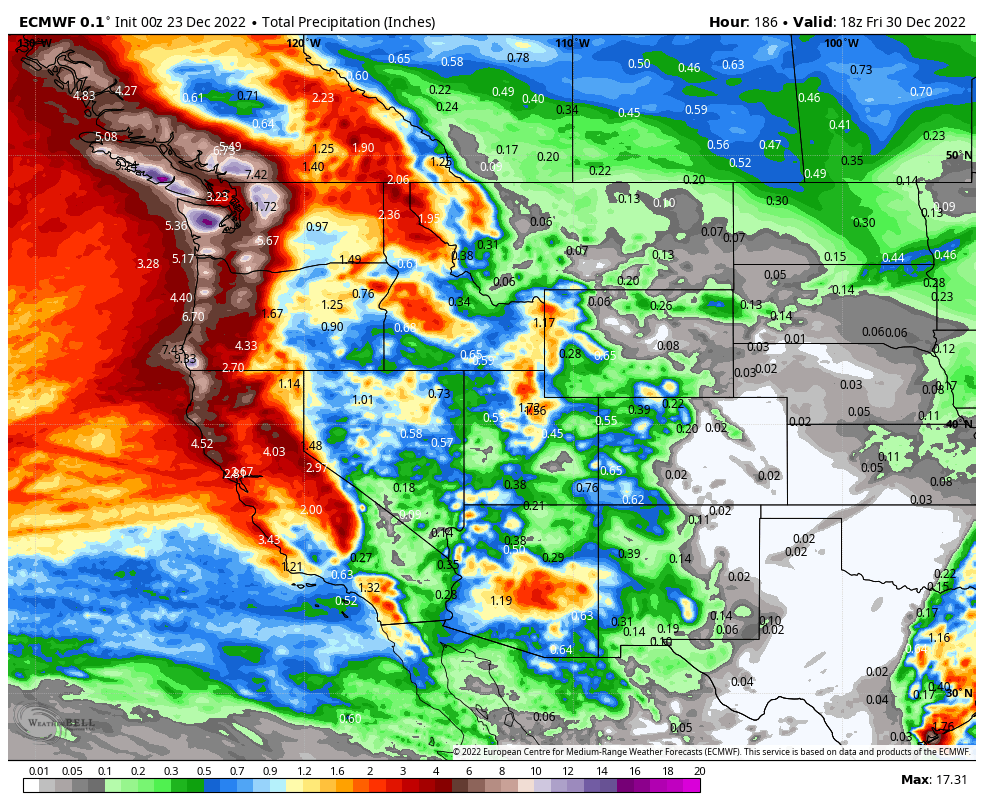 Below: Total snowfall looking out 7 days is a gamble, with decent amounts noted for a good portion of the west. The PNW and areas of BC might end up with decent totals, but warmer temps might keep lower elevations as rain, especially near the coast. It will be cooler inland from Idaho to the interior of BC. The Sierra will grab deep moisture Tuesday-Wednesday with warm and windy conditions initially. Gamble on some deep freshies for Idaho, Wyoming, and northern Montana, dropping south into the 4 corners region by Wednesday or Thursday. Atmospheric Rivers often bring warm temps and this is no exception. 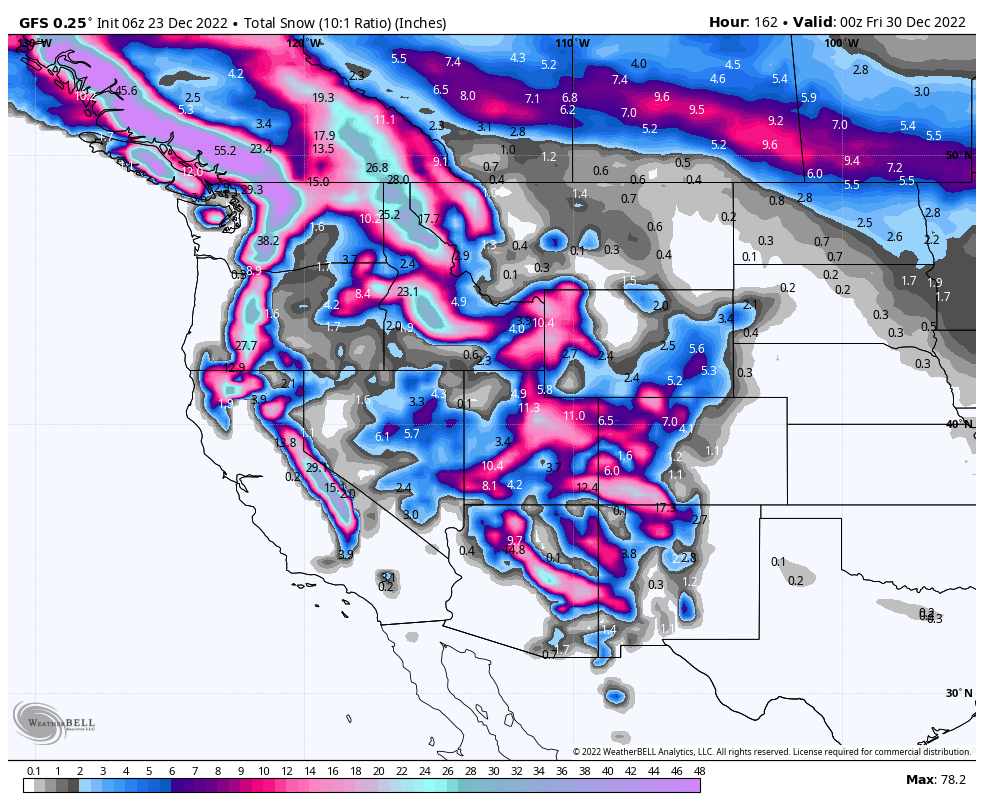 This forecast will be updated! Our Powder Alert Sign-up link is now working, so if you are not signed up for the free emails click here. Enjoy the upcoming holiday and hopefully, you will score some powder. Powderchasers is looking for a few more sponsors. If you are interested in being highlighted in our forecasts, and 110K social media following reach out to us at powderchasersmedia@gmail.com