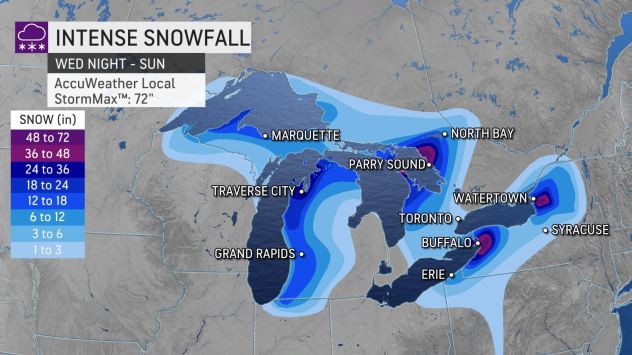 To all of our friends in the Great Lakes region of the country- you better buckle up. You’re about to get pounded by a classic early-season lake effect snowstorm.

Accuweather is predicting a massive storm to sweep across the entirety of the Great Lakes region starting on Wednesday night and to run through Sunday.

The worst of the storm is expected to hit near Buffalo, NY.

“The heaviest snowfall is expected to occur downwind of Lake Erie and Lake Ontario in New York and Lake Huron in Ontario. Several feet of snow can occur where snow bands persist over the same location for an extended period of time,”

“Buffalo and its southern suburbs may receive as much as 3 to 6 feet of snow by Sunday,” Benz said, adding that the heaviest snow may fall over two periods — Thursday night into Friday and then Saturday into Saturday night. “These two periods will likely feature the worst conditions of this event.” 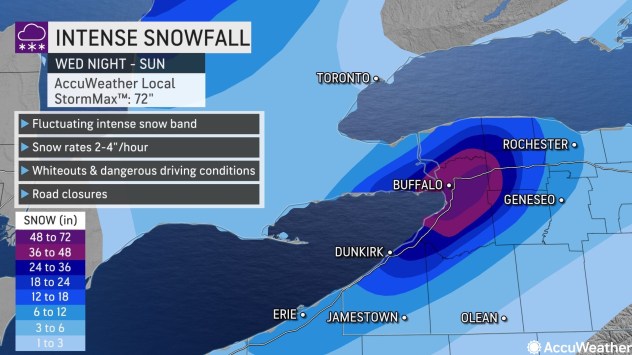 Buffalo is no stranger to monster lake effect storms.

The city surely remembers the epic ‘Great Buffalo Blizzard of 2014’ that dumped more than 60 inches over the course of 4 days in November of 2014.

Buffalo getting slammed with nearly 6 feet of snow is somewhat exciting for those of us passionate about winter, but let’s take a look at how some ski resorts/areas in the region could benefit from the storm.

Based on the Accuweather chart, it looks as if Mount Bohemia, MI could see 2-3 feet of snow throughout this week.

The mountain isn’t open yet, but that early-season base building storm can only be good for Boho.

Some of New York’s smaller ski areas should see snow as well. Look for Buffalo Ski Center, Kissing Bridge, and Holiday Valley to get buried.

Stay tuned here at Unofficial Networks for all updates with the coming Lake Effect storm. We’ll be sure to include photos and videos as they become available. It's About To Snow 4+ Feet In Buffalo, NY