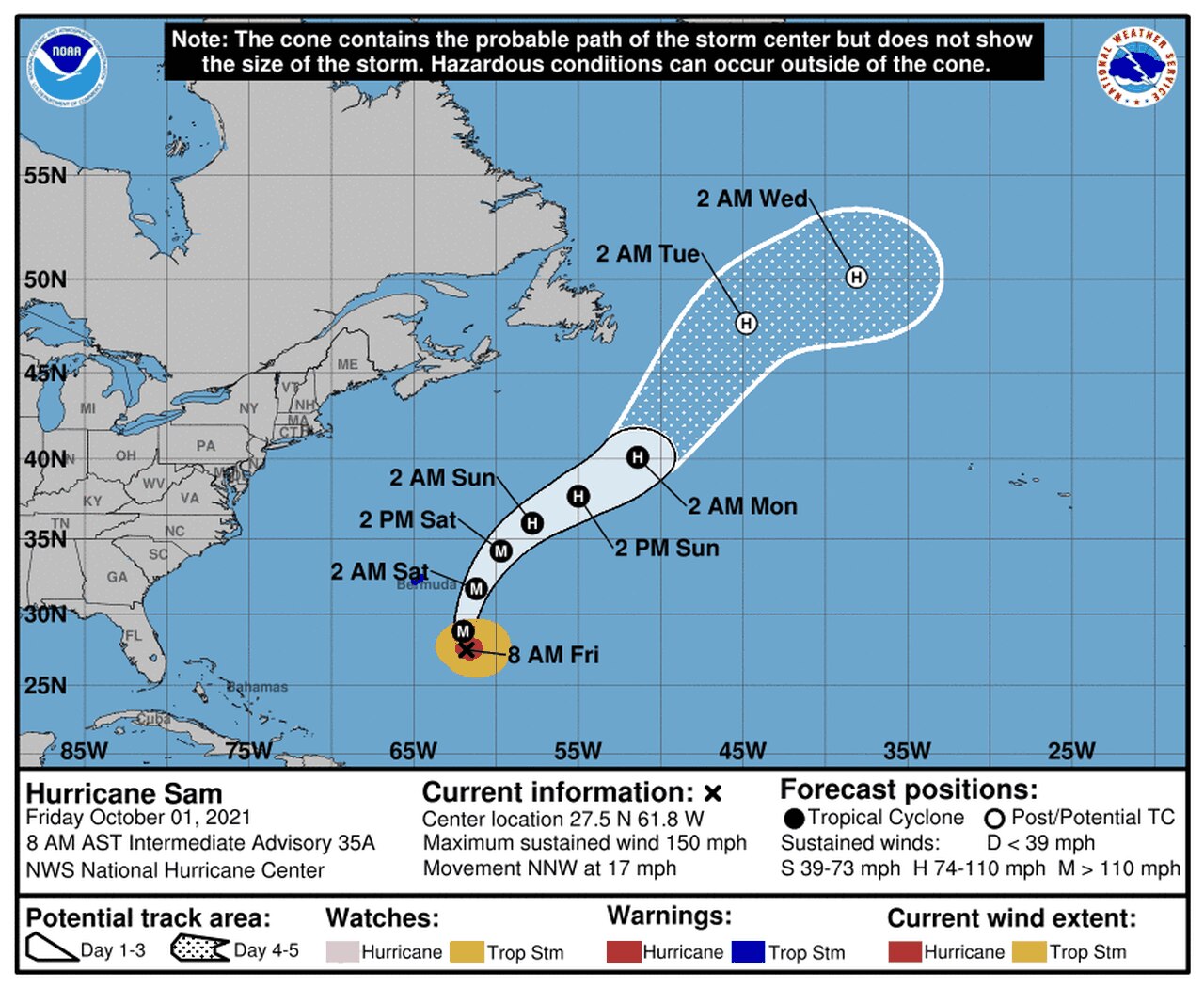 Hurricane Sam is currently barreling its way through the Atlantic ocean with winds spinning at 150mph. NOAA classifies Sam as a ‘Strong Category 4′ and is tracking the storm to travel east of Bermuda and then North.

It doesn’t appear that the storm will make landfall with mainland North America, but meteorologists are keeping a close eye on the storm should anything change.

NOAA is using its brand new Saildrone 1045 to capture first-person POV of the weather conditions inside of the storm. Saildrone is equipped to withstand hurricane-force winds to capture real-time data from within the storm. The drone is a groundbreaking achievement in meteorology, and could be a pivotal tool for humans to better understand and predict hurricane patterns.

NOAA shared this quick clip of Saildrone battling 50′ waves and 120mph winds yesterday. The footage looks absolutely ludicrous, and it’s amazing to think that this machine can withstand the weather.

From NOAA/Saildrone: “The Saildrone Explorer SD 1045 was directed into the midst of Hurricane Sam, which is currently on a path that fortunately will miss the US East Coast. SD 1045 is battling 50-foot waves and winds of over 120 mph to collect critical scientific data and, in the process, is giving us a completely new view of one of Earth’s most destructive forces.

Equipped with a specially designed “hurricane wing” enabling it to operate in extreme wind conditions, SD 1045 is braving Hurricane Sam in the open ocean, collecting real-time observations for numerical hurricane prediction models, which are expected to yield new insights into how large and destructive tropical cyclones grow and intensify.

SD 1045 is one of a fleet of five “hurricane” saildrones that have been operating in the Atlantic Ocean during this hurricane season, gathering data around the clock to help understand the physical processes of hurricanes. This knowledge is critical to improving storm forecasting and is expected to reduce loss of human life through allowing better preparedness in coastal communities.

“Saildrone is going where no research vessel has ever ventured, sailing right into the eye of the hurricane, gathering data that will transform our understanding of these powerful storms,” said Richard Jenkins, Saildrone founder and CEO. “After conquering the Arctic and the Southern Ocean, hurricanes were the last frontier for Saildrone survivability. We are proud to have engineered a vehicle capable of operating in the most extreme weather conditions on earth.”

“Using data collected by saildrones, we expect to improve forecast models that predict rapid intensification of hurricanes,” said Greg Foltz, a NOAA scientist. “Rapid intensification, when hurricane winds strengthen in a matter of hours, is a serious threat to coastal communities. New data from saildrones and other uncrewed systems that NOAA is using will help us better predict the forces that drive hurricanes and be able to warn communities earlier.”