We just came off an epic storm cycle for Colorado that landed up to 40 inches for the Foothills and 2 feet plus for the mountains. The next 7 days bring some teasers, followed by perhaps heavier snow in the extended.

The past storm for Colorado provided some epic snowfall. Here are a few winners as of Monday morning’s reports. We advertised this storm nearly a week away with the GFS holding steady on 2-4 feet while other models waffled a bit. The northern San Juan Range benefited from winds blowing from the NW and the low-pressure system just to the south over New Mexico. The Front Range benefited from a counterclockwise flow of SE winds that funneled moisture over the Front Range Foothills. The Aspen area mountains also saw significant snowfall with W, NW winds (Snow funneling from the south) while the core of the intermountain Corridor got stuck in a bit of a donut hole (Moderate amounts). It’s interesting to note that even though moisture was abundant in the San Juan Range the wind direction from the W, NW kept most of the snow over the northern ranges near Telluride (Very little snow over the southern San Juan Range- Silverton, Purgatory). However Wolf Creek managed to score big time, and Taos who also benefits from W NW winds did very well. I ended up at Highlands on Sunday morning.

Here is a photo of me riding in Boulder, very early Monday morning for a quick run as the sun came up and the Flatirons in the background. Follow @powderchasersteve-via Instagram 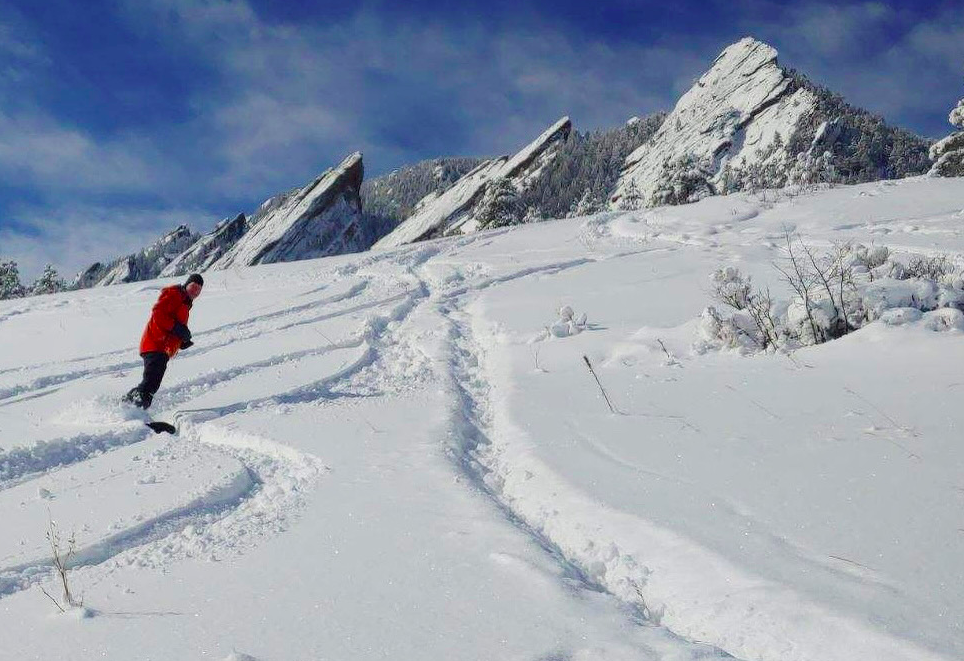 A low-pressure system centering over New Mexico is spreading light to moderate snow to the southern mountains of Utah and will enter Colorado Tuesday morning. To full surprise on Tuesday morning, a strong cell set up over Park City where 10 inches fell in just 3-4 hours from midnight to 3 AM. With S or SW winds the Park City side will be deeper than the Canyons side. Elsewhere in Utah, only 1-4 inches fell including the Cottonwoods. The models favor the Front Range of southern Colorado (I-25 near the New Mexico border) for heavy snowfall (Urban areas). For the mountains, if I were to chase powder, I might head to Telluride where 3-8 inches is likely split between late AM Tuesday to early Wednesday. Some decent amounts are also noted on some models for Aspen (3-6). For the I-70 corridor scattered snowfall favoring the western areas of the corridor is likely late Tuesday. Wednesday. could offer some soft turns along I-70 but the deepest amounts (Moderate at best) are likely further west. Taos is likely to see some moderate snow overnight Tuesday into Wednesday. Due to the convective nature of these cells, it is hard to pinpoint who will see the highest amounts. Park City scored last night in just 3 hours (10 inches).

Below: Park City scored on Monday night in just 3-4 hours! 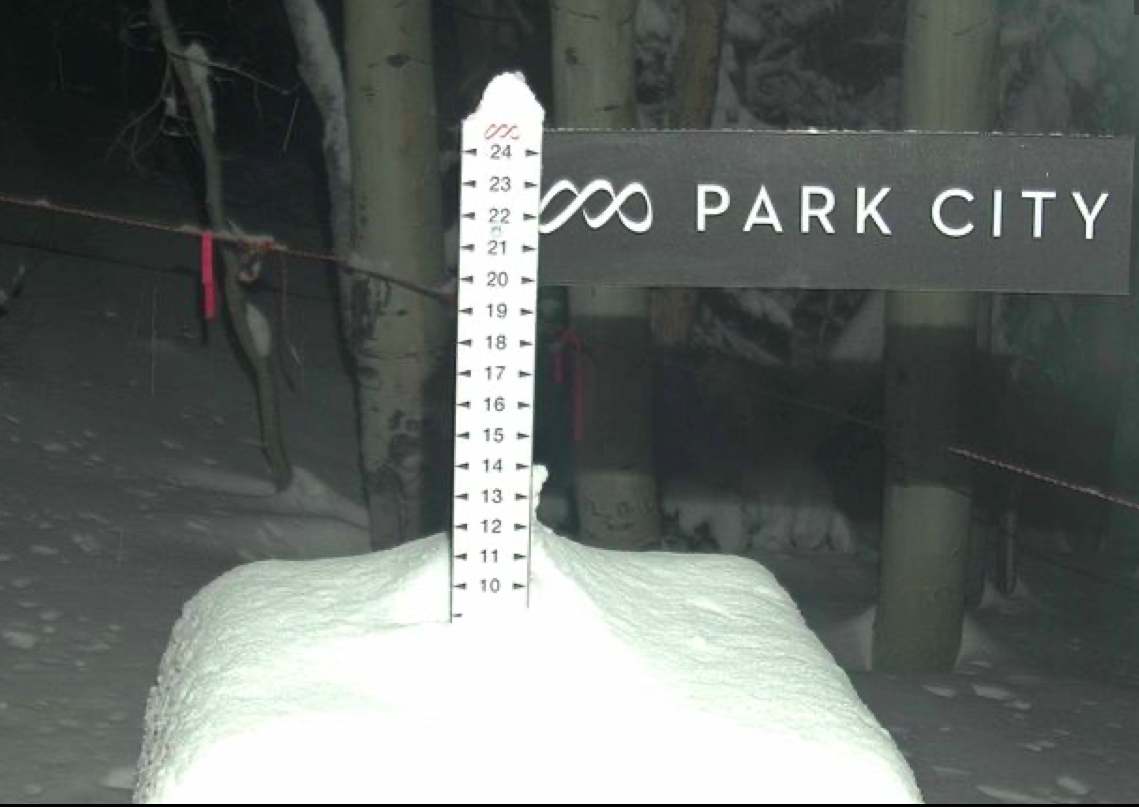 A low-pressure system will stream in from the Pacific late this week. The focus will be in the Sierra for Thursday night into Friday with a decent shot of 7-14 inches (Good timing) for 1st chairs. The Good: Overnight snow. The Bad: Slightly warm so the quality might be a bit dense at lower elevations and lower snow totals below 7,000 feet. Caveat: Denser snow may also cover up the bumps nicely, as the storm finishes on the colder side.

Below: Total snowfall for the Sierra for Friday morning on the American GFS Model. Other models show less snow so it’s likely a bit overdone. 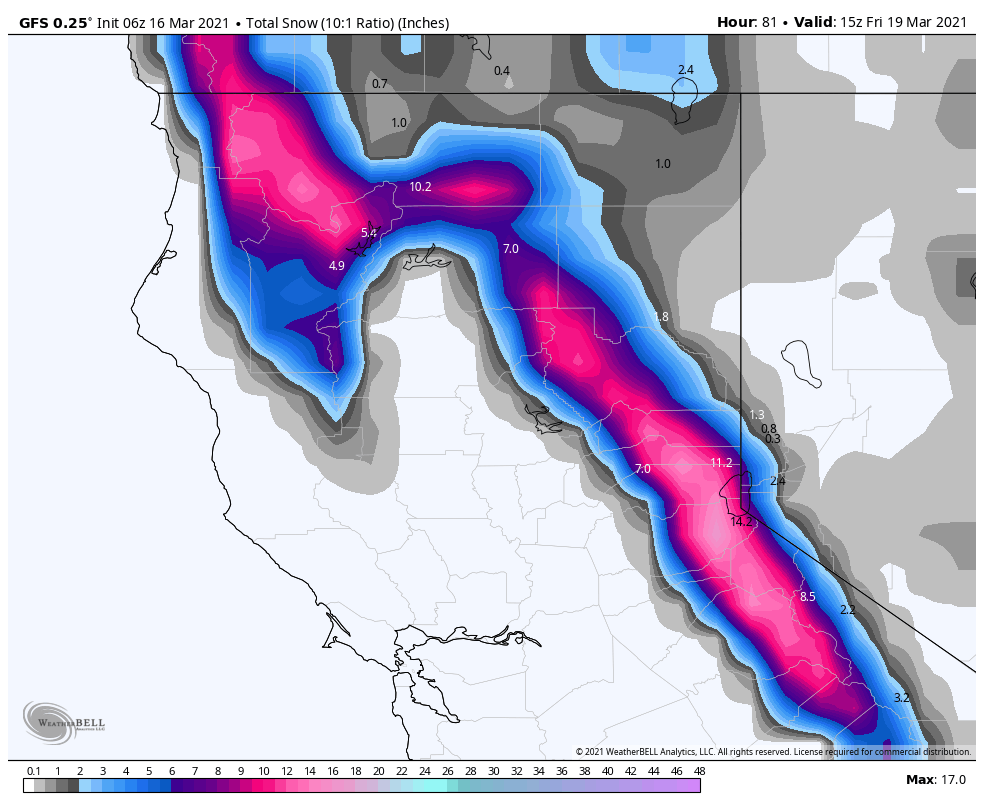 A storm will enter the Pacific Northwest by late Friday that will overspread moderate snowfall to a wide area of the Cascade Range (Washington and Oregon) with W-NW wind directions. Conditions will improve in many areas on both Saturday and Sunday (Moderate event).

Below: Storm entering the PNW late this week and spreading over the northern Rockies by Saturday/Sunday 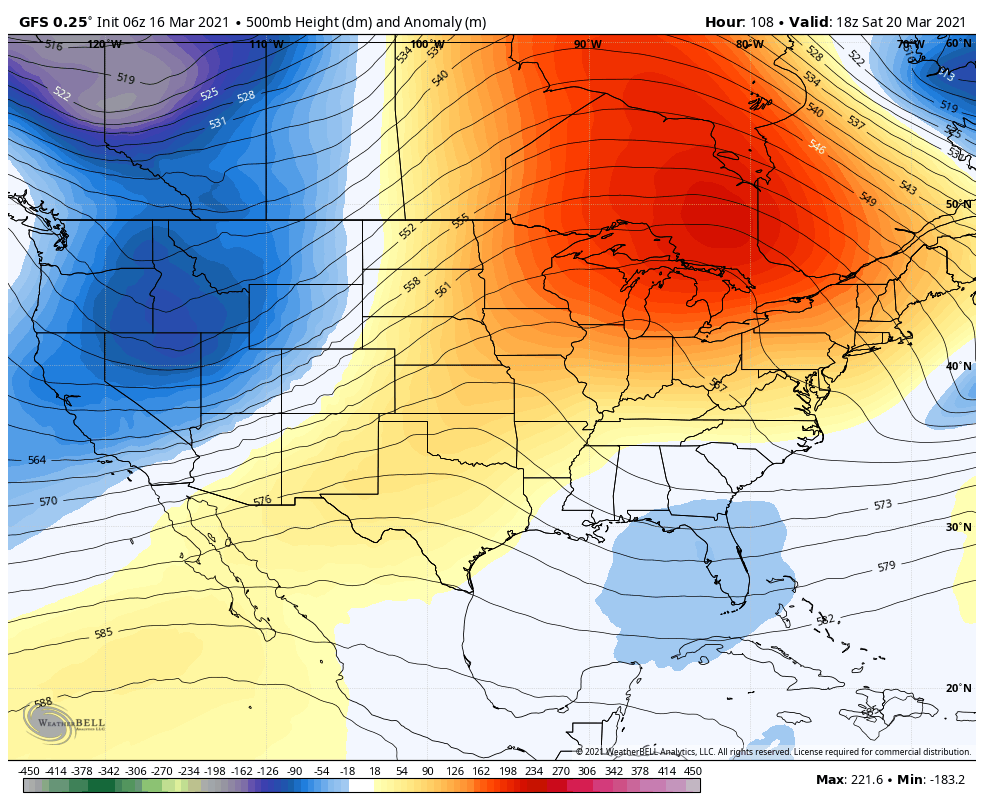 That system heads east and should offer some moderate snowfall for central Idaho, the Tetons, and Wasatch by late Saturday and Sunday. This deserves watching for any enhancement in later model runs. Colorado will grab the leftovers Sunday/Monday favoring the north/central mountains.

Yet another system will enter the Pacific Northwest early next week and spread over the Rockies by the middle of week #2 (Appears to be a progressive, fast mover with good orographics).

Below: Another fast-moving low-pressure system overspreading the Rockies by Tuesday/Wednesday next week. 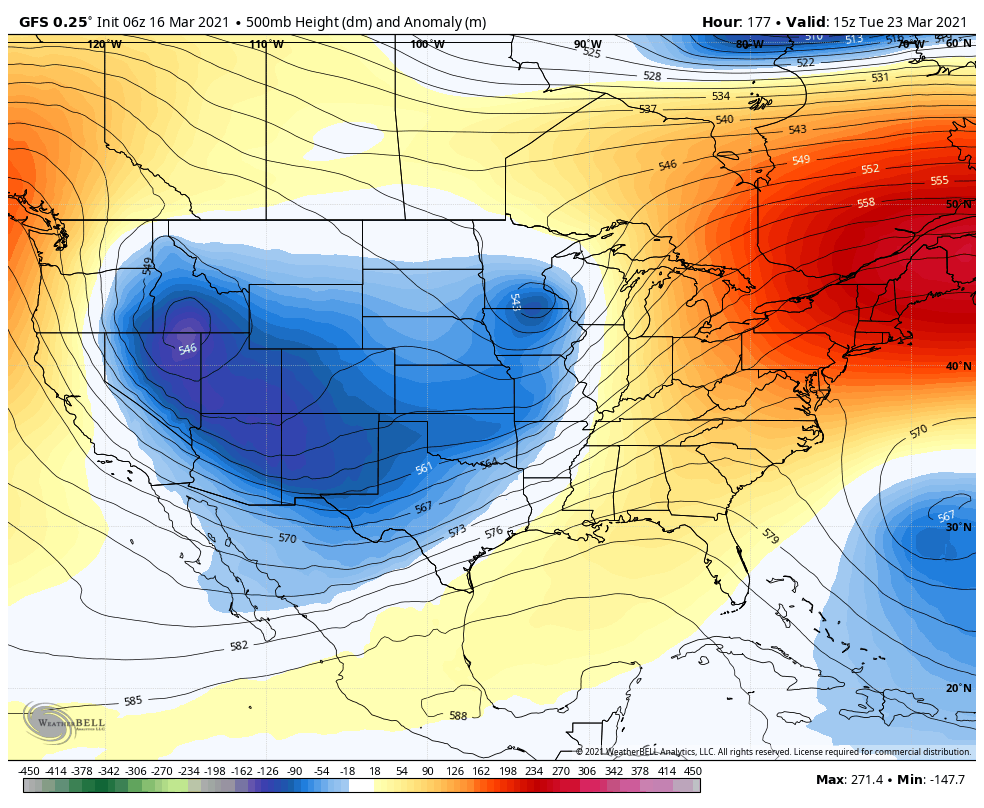