Significant amounts of powder are falling in the Cascades and transitioning to the Rockies this week. Winds will be strong in certain areas making chases tricky on what terrain opens and avalanche danger rapidly rising.

On Sunday, very deep snow fell over the southern San Juan Range of Colorado. Wolf Creek reported 29 inches Sunday.  My choice of pow was Snowbird where 12 inches fell Saturday night on top of the 5-7 from the previous day. The day was prime with blower pow, light winds, and hard to believe lighter crowds (LCC was closed until 7:30).  Snowbird Patrol had most of the front side open for 1st tram of the day (Hats off).

If you live in Texas, it’s bitter cold at 8 degrees in San Antonio this morning! Powder outages are occurring, and if you are using alternative sources of heating beware of the risks of Carbon Monoxide Poisoning (Have CO detectors on every floor of a home).

Below: @powderchasersteve (Instagram) hiking at Snowbird on Sunday into an alpenglow of powder. 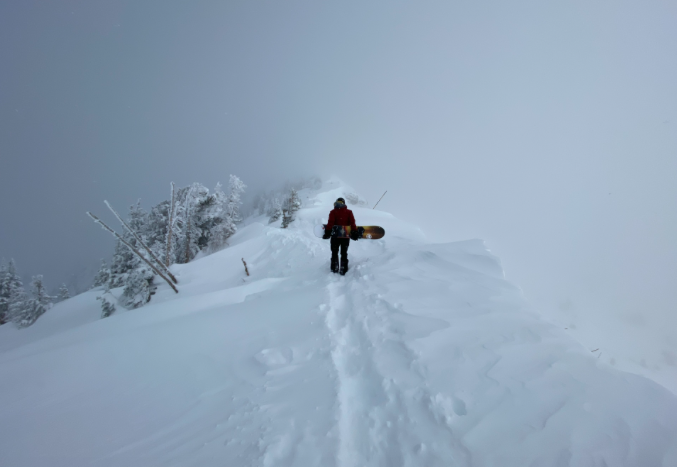 The next series of storms is underway in the west, with heavy snow falling over the Cascade Passes. While the last storm favored the central Cascades near I-90 (Alpental, Stevens) with a foot of blower, the next 24-48 hours will feature a wind shift to the West, Northwest pushing higher totals to Crystal, White Pass, and the Cascades of Oregon. Areas further north including Stevens and Alpental will also reap deep rewards. The northern Cascades near Mt. Baker will see less. Monday, Tuesday, and Wednesday could be good in the PNW! Low snow levels also.

In the Rockies I will summarize:

* Moderate to heavy snow is falling in the Tetons Monday morning (5 at Targhee at 7 AM in the past 4 hours).

* Snow continues in the Tetons Monday with 7-12 inches likely by late Monday night. Targhee might see the highest amounts.

* The Wasatch of Utah is just getting underway with moisture just starting in many areas (3 at Beav, 4-Cherry Peak as of 6 AM). Snow will intensify over the Wasatch Monday late AM or early PM with strong ridgetop winds. Late Monday might be decent in the Cottonwoods, but winds will be strong.

* Utah will continue to see moderate to heavy snowfall with a prolonged NW flow bringing several periods of 6-12 inches every 24 hours through Wednesday. Little Cottonwood is favored however deep amounts will also be found at Powder Mountain (Good wind direction), Canyons side of Park City, and Solitude (Big Cottonwood). All mountain ranges of Utah including the central and southernmost areas will be deep in the next few days. Winds might be an issue for upper elevation resorts especially Monday through Tuesday morning. It won’t stop snowing until some point on Wednesday. Many choices on where to ride late Monday, Tuesday, and Wednesday.

*Colorado is favoring resorts on the western side of the I-70 corridor. Steamboat could score another 12 plus inches in the next 24-48 hours. Vail Pass will see several periods of 3-6 inches adding up to double digits in the next few days. Telluride is a good choice with NW winds, and moisture taking focus on the northern San Juan Range (6-12 through late Tuesday night). Silverton will also score. Wildcard picks Aspen Highlands, Snowmass, Beaver Creek, Monarch. Tuesday and Wednesday will be powder days! For Summit County and areas east look for several periods of light to moderate snowfall during this period, however, Breckenridge does well with NW flow and could sneak out decent totals by late Tuesday or early Wednesday (prolonged period of snowfall with no double-digit 12-hour event).

* Taos will eventually sneak in a decent powder day on Tuesday or Wednesday.

The period stays active in the Rockies until midweek. another storm is likely to bring decent amounts of moisture to the Pacific Northwest late this week. Stay tuned for more chases that could extend from the PNW to the Rockies.

Please consider a donation to Powderchasers or join our concierge program to support our forecasts.

Lastly, our deepest condolences to the friends and family of the avalanches victims in Colorado over the weekend as well as the victim of an avalanche up