Summary: Grab a seat and pick your favorite Ski Area in the west as there are many choices this week and weekend.

Studying models, especially on where to chase powder can be frustrating. The next 2-5 days shows good promise of deep snow for the PNW, Sierra, Tetons, New Mexico, Central Idaho, Wasatch, and most of Colorado. When so much is happening at once it becomes very difficult to spell out details in one post. Therefore we will summarize the chase forecast below.

Storm #1 enters the PNW Thursday afternoon with very cold temps. The southern and eastern sections of Washington will see lowland snowfall (Sea Leval). That system puts down moderate snow in the mountains of Oregon by Friday morning with light to moderate amounts for the southern Washington Cascades (Some models push the snow further north to I-90 resorts).  Bottom Line: Decent conditions in the PNW- Blower density- Decent totals. Oregon will likely be deeper.

Storm #1 also lands 12 plus inches for the entire Sierra Range late Thursday night. Good timing (Overnight snow). The Tetons grab snow beginning late Thursday into early Friday with 9-14 inches likely by 10 AM. Central Idaho will also see moderate snowfall during this period followed by the Wasatch. Utah peaks after midnight Thursday so heavy snow will be falling as you drive to your favorite resort Friday. With SW winds initially it’s possible that Snowbasin or even Beaver report higher numbers Friday morning (Northerly influence). Deer Valley or Park City could also be solid choices. Big Cottonwood might land higher numbers than Little Cottonwood. However, the winds veer to the west and even NW Friday so areas that saw less snow Friday morning might catch up by midday (Little Cottonwood).  Bottom Line: Warmer temps in Utah might keep amounts to 5-9 inches Friday morning, but enhanced snow bands could finish out Friday with 9-15. Some resorts further north along I-80 or in the northern Wasatch might come up with some surprise totals but it’s likely that the Cottonwoods catch up.

Below: Sierra Range Friday morning will see an even spread of 12 plus inches above 7,000 feet. 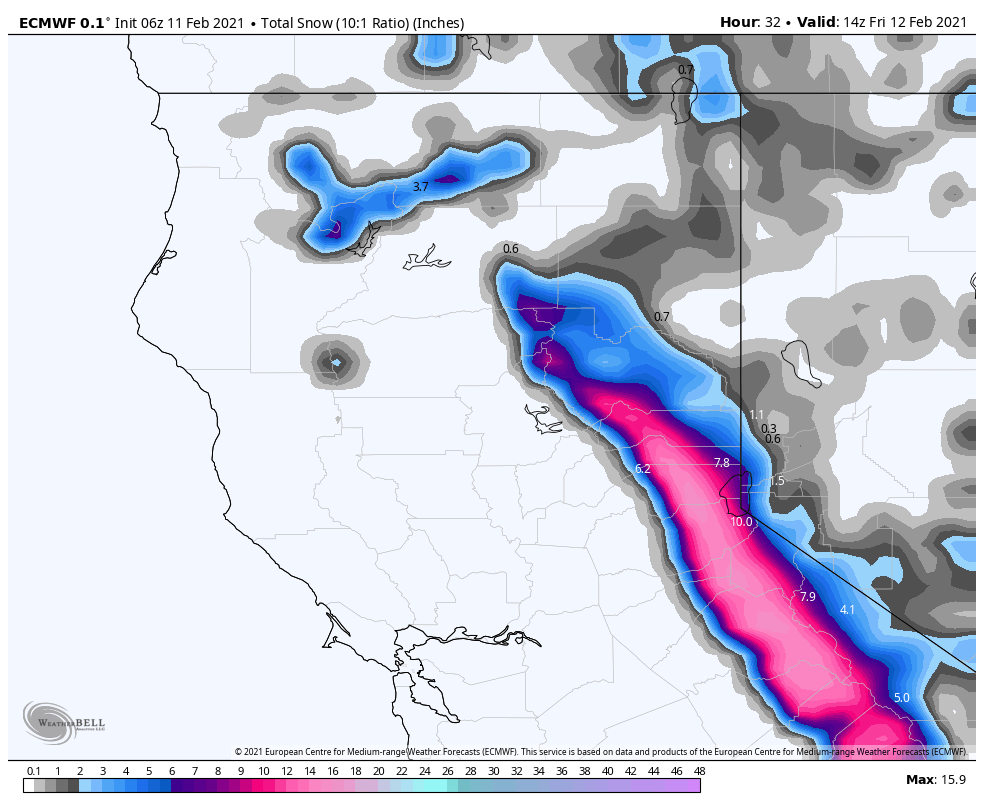 Bottom Line: Stay in the PNW if you are there! Oregon is favored!  Stay in the Sierra for good timing pow for Friday morning. Stay in Utah for storm skiing Friday. Watch the webcams for deeper totals further north initially. Stay in Wyoming for a colder storm likely to produce decent amounts by Friday morning. If you are in Colorado aim for Steamboat, Aspen, Crested Butte, Silverton, or perhaps Telluride on Friday. Watch the webcams.

Below: Precipitation (Moisture) totals for Wyoming, Utah, and Colorado through late Friday. 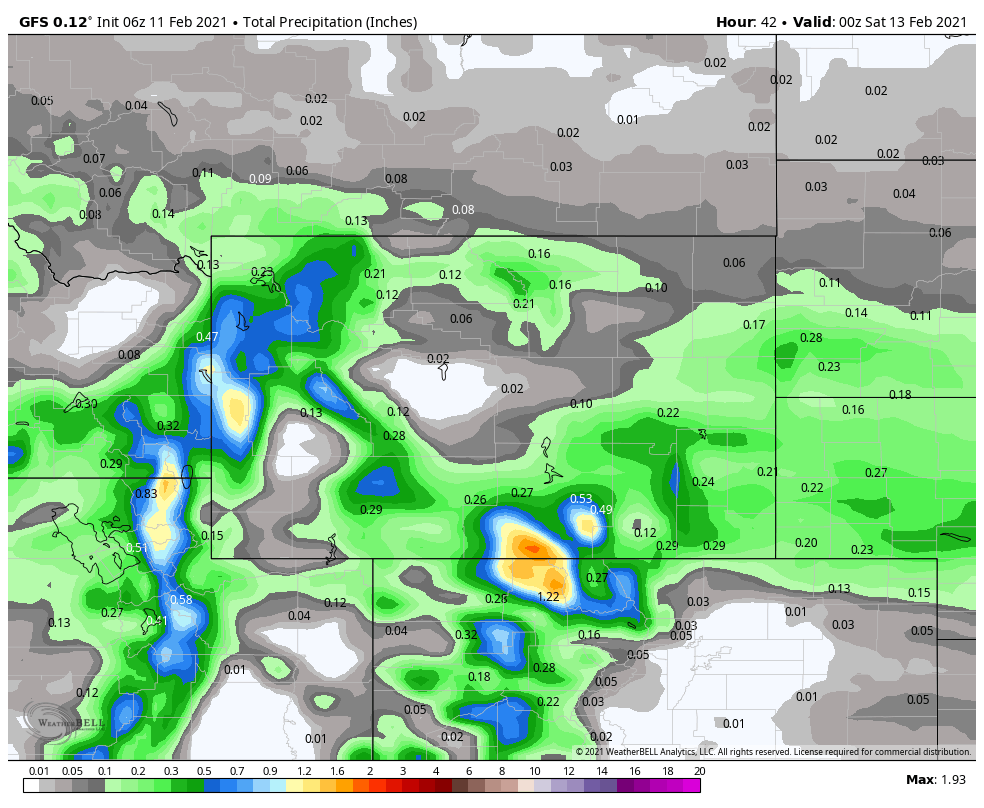 Another and stronger system enters the Pacific Northwest from Friday night into Saturday. That system could land 12-16 inches for southern Washington and most of Oregon. The Euro, NAM 12, and some of the ensembles show decent totals for these areas, but the GFS continues to push the heavier snow further south (Oregon-Washington border). The best guess is that since the GFS is the outlier in models, that both Oregon and southern WA grab a deep powder day for Saturday. Snow will be falling heavily in the metro areas, so travel will be very difficult or impossible.

This 2nd storm takes aim at the Rockies for Saturday night and Sunday where many areas will grab 1-2 feet of additional snow. Currently, it favors a southerly track over the 4 corners. This will pump ample moisture north into Utah and a wide area of Colorado (Central and southern mountains). Further north in Colorado could once again see higher totals near Steamboat, perhaps a surprise near Breckenridge (Sometimes scores with SW winds funneling snow into southern Summit County). Many areas will be deep in Colorado, however, I am not going to go into details just yet (4 corners might be favored).

Below: Total snowfall through next Wednesday morning for the west. Significant totals noted for the PNW, Sierra, Utah, Wyoming, western Idaho, and a good portion of western Colorado (4 corners are favored early next week). What happened to Montana? Arizona is a wildcard. New Mexico is a contender. 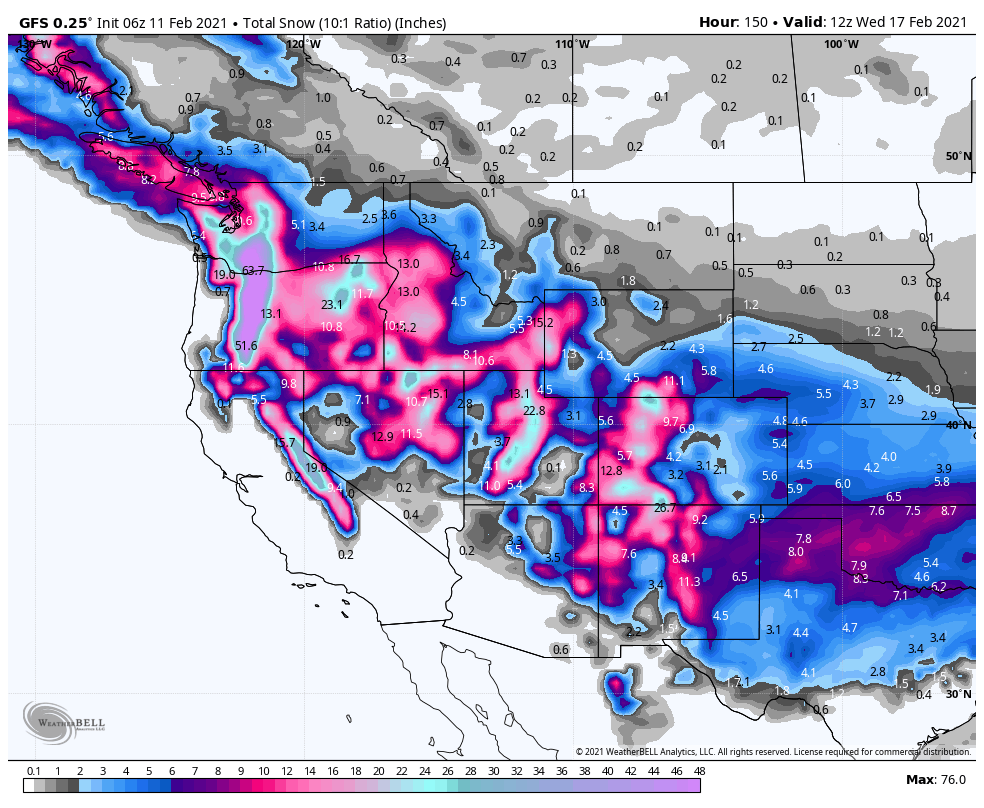 Yet another storm is likely for the west early to mid next week.

Enjoy the powder everyone!  You might score 5 powder days in a row.

Please consider a donation to support our forecasts. Love these simple no nonsense vehicle conversions. It’s easy to get lost in the sauce of which kind of distressed wood you should use the (…)