Very wet conditions will continue over the Pacific Northwest, coastal BC nearly every 24-36 hours. The Sierra gets a good dump early next week with the Tetons and perhaps the Wasatch in the game by Tuesday.

Trip Report:  Stevens Pass on Thursday was in the 10-inch range heavier density than the deep blower on Wednesday. Unfortunately, after waiting for the patrol to open up the Double Diamond and Southern Cross Chair they pulled the plug at 10-AM. New operational procedures stagger openings there and in some cases, you get skunked. Stevens Pass benefited both days with cooler temps that are influenced by an easterly push of cooler air from the Eastern Cascades. They nabbed nearly 25 inches while I was there Wednesday and Thursday.

We are glad to see 2020 behind us! We should be thankful that Ski Areas remain open, and it’s my opinion that this will continue as we search for outdoor activities. The pattern remains very active in the Pacific Northwest albeit warm temps are bringing dense snow to many areas this weekend. Rain may also fall at the bases at times with 4500 to 5000-foot snow levels until cooler temps late Saturday night usher in better quality snow. The cooler air is short-lived with a return of warmer temps Sunday mid-morning into Monday. Winds may also be an issue on Sunday. The interior Panhandle of Idaho will be slightly cooler through the period with the deepest dump for Sunday morning (10-15) favoring the northern areas. Selkirk Powder will be deep on Sunday! Mount Baker is favored initially with all areas of the Cascade Range of Washington doing well Saturday PM to Sunday. Temps will trend down late this weekend only to rise again at some point Sunday PM and Monday. Timing of the cold air and moisture will make sudden changes to our chase locations.

Whistler has seen 30 inches in the past 7 days! Snow continues at upper elevations in the short term forecast. Interior BC should score deep snow by Sunday morning.

The chase potential turns to the Sierra for Monday/Tuesday. High confidence in 12-15 inches plus for the entire Sierra Range with perhaps higher amounts at the upper elevations. This will be a decent storm.

Below: Total snowfall through late Tuesday for the Sierra Range. 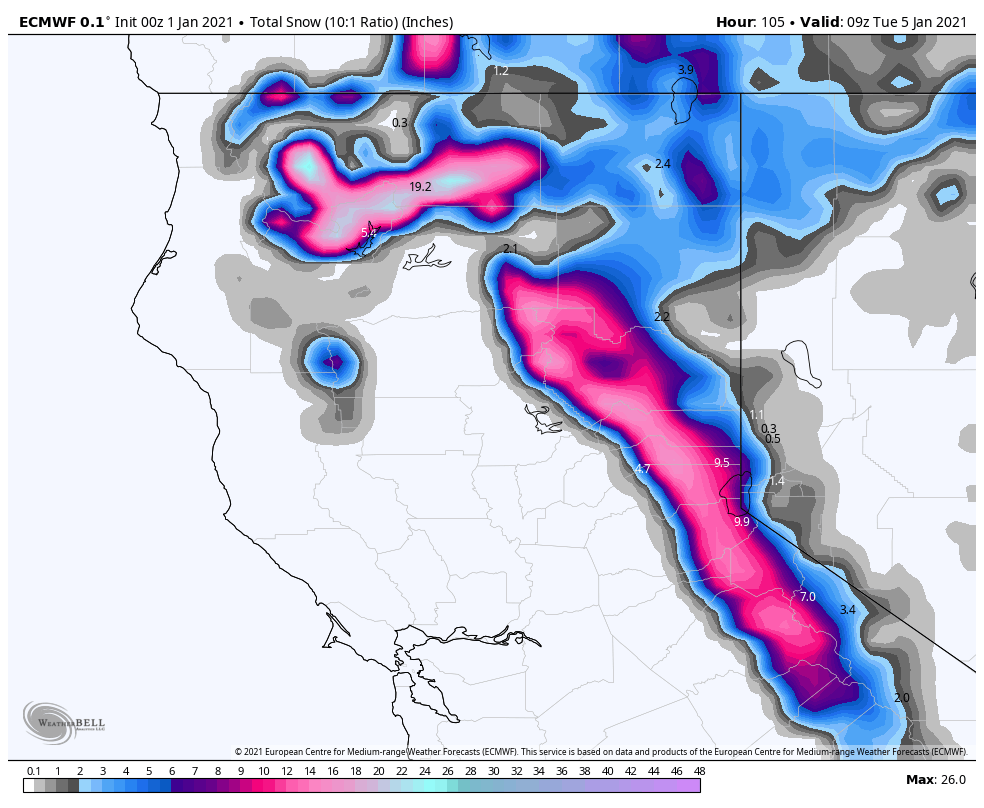 The Rockies won’t disappoint early next week but there is a significant discrepancy on who sees the highest totals. Light or moderate snow will favor the Tetons on Sunday with heavier amounts likely over Western Idaho towards Brundage. The Euro shows a decent dump for the Tetons and extreme southern Montana for Monday night and Tuesday while the GFS is taking higher totals over the Wasatch. Colorado appears to stay in the leftover ranges at some point Tuesday with snow likely during the day into Wednesday (May not be a deal-breaker).  Let’s hope it overperforms.

Below: Ensembles showing a trough over the Rockies midweek. 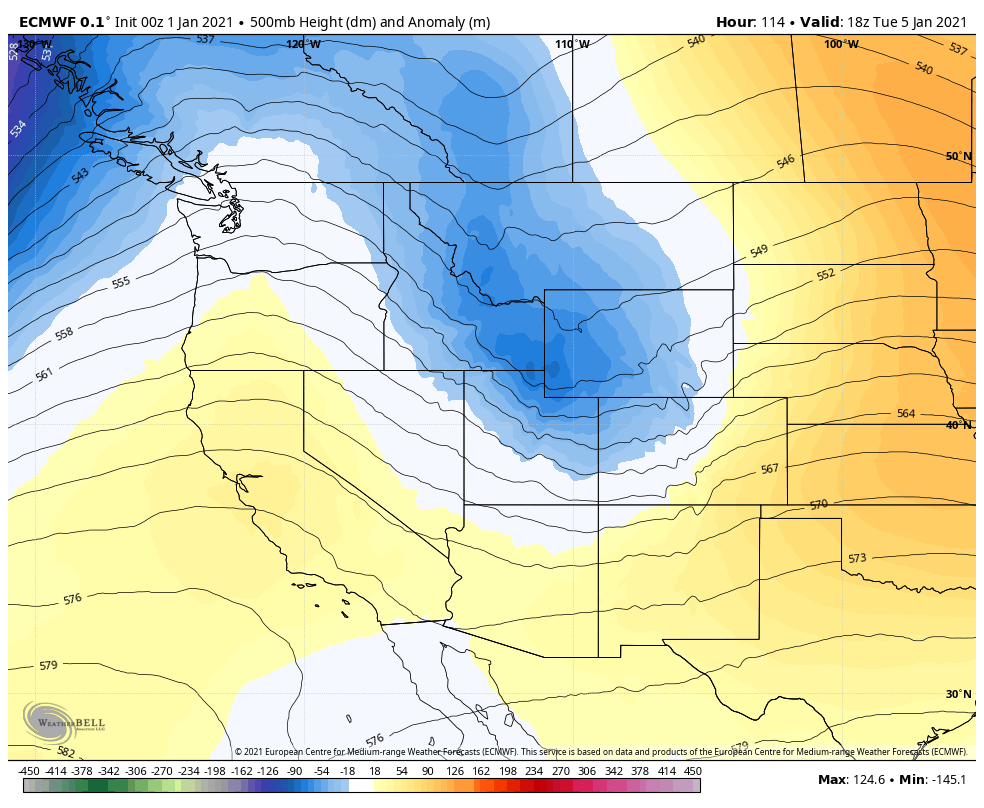 As of today, the map below shows water totals as compared to normal. This would = the amount of water collected if you melted the current snowpack. You can see below that the Pacific Northwest is above average as expected in a La Nina season. Also, the northern Rockies are doing pretty well, with an anomalous above-average number for southern Colorado. 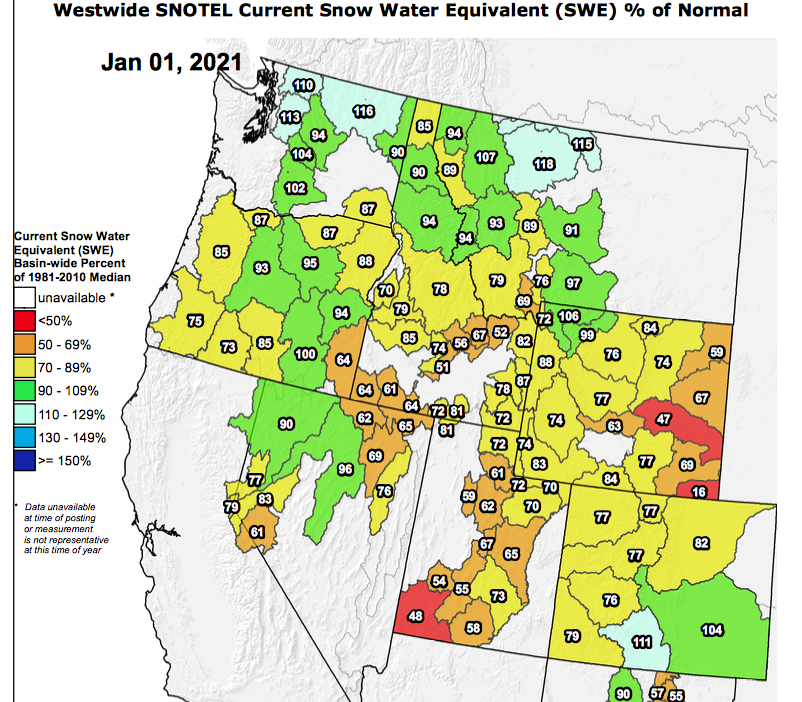 Below: Lake Tahoe is only at roughly 50% of normal snowpack, but that is about to change! 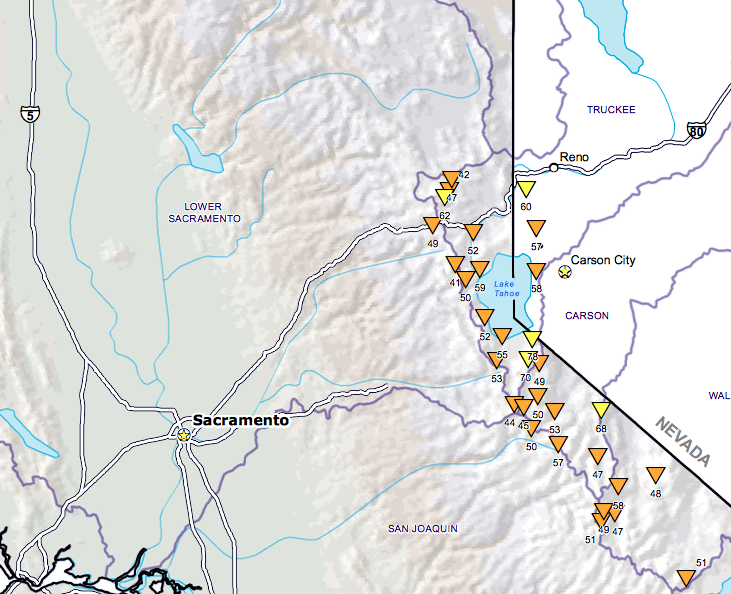 The general trend in the models is to remain active for the Pacific Northwest next week. The temps will flip flop from warm to cool with significant higher elevation snow. The trend is for storms to come onshore every 24-36 hours and dig south. There is a good chance of an additional deep dump for the Sierra in the latter half of next week. The Rockies will continue to see weakening systems drag some wrung out moisture from the Sierra later next week.

Below: January 20-27 showing a wide area of storminess possible over the intermountain west 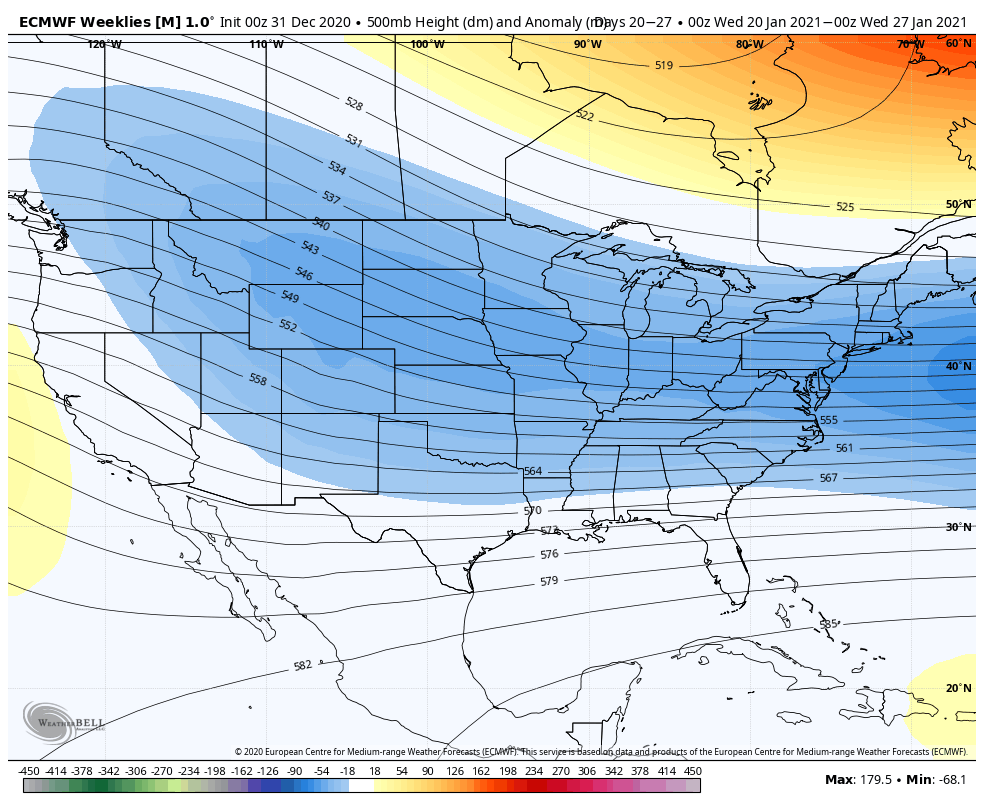 Please support our sponsors and sign up for our Concierge Service that bases your chases on a custom map forecasts, winds, density, timing of the best storms of the season and our desire to get you the deepest days.

Lets move on to 2021. Thanks for following Powderchasers over the past and challenging year!