Deep Powder Forecasted For The East & The West

Deep Powder Forecasted For The East & The West

Many options to choose from, with bases building up in some areas of the west. The East Coast metro areas are about to get more snow in 1 storm than all of last season. The Cascades, Sierra, and Rockies will score more snow.

Trip Report: Chased to Mount Baker for Tuesday with the models with a sneak up powder day (Early morning start with storm skiing). I did not expect more than 4-6 inches by morning. Snow began earlier than expected so a nice 11 inch surprise at opening. It continued to snow all day at Mt. Baker. The bases are deep and the snow quality was a bit wind impacted in some areas with medium to medium heavy densities, An additional 7-8 inches fell between Tuesday and Wednesday morning so if you are up there will be met with another powder day (A bit denser today).

Further south in the Cascades a convergence zone set up with 7 overnight for Stevens Pass and a storm total of 12 inches. This might cover up some previous frozen layers as the temps are around freezing at the base.

In the Tetons 8 inches fell in the past 24 hours building the bases further with 3 storms in the last week. Temps were very very cold so its all feathers. Get ready for face powder with very cold temps. Its still snowing heavily In the Tetons!

* Heavy snow for the Mid Atlantic States (12-18 for metro areas from PA to Boston). The northern side of West Virginia through to PA, NJ, NY, MA and perhaps southern NH will be your best bets. This is the first pre XMAS storm in excess of a foot in Boston since 2003.  Further north where the ski areas need it, its unfortunately a bust with the exception of southern Vermont and perhaps New Hampshire with 4-9 inches possible. The Berkshires might be a better option (8-11). Snowshoe West Virginia will grab 8-12 inches by Thursday morning. The Good: Heavy snowfall.  The Bad: Most ski areas of central or northern New England get much less. Southern Ski areas of New England are wildcards.

Below: The GFS shows the line between deep snow and nearly nothing for the northern mountains of New England. Southern NH or Vermont are on the edge, with the Berkshires and all areas south in a winter wonderland. 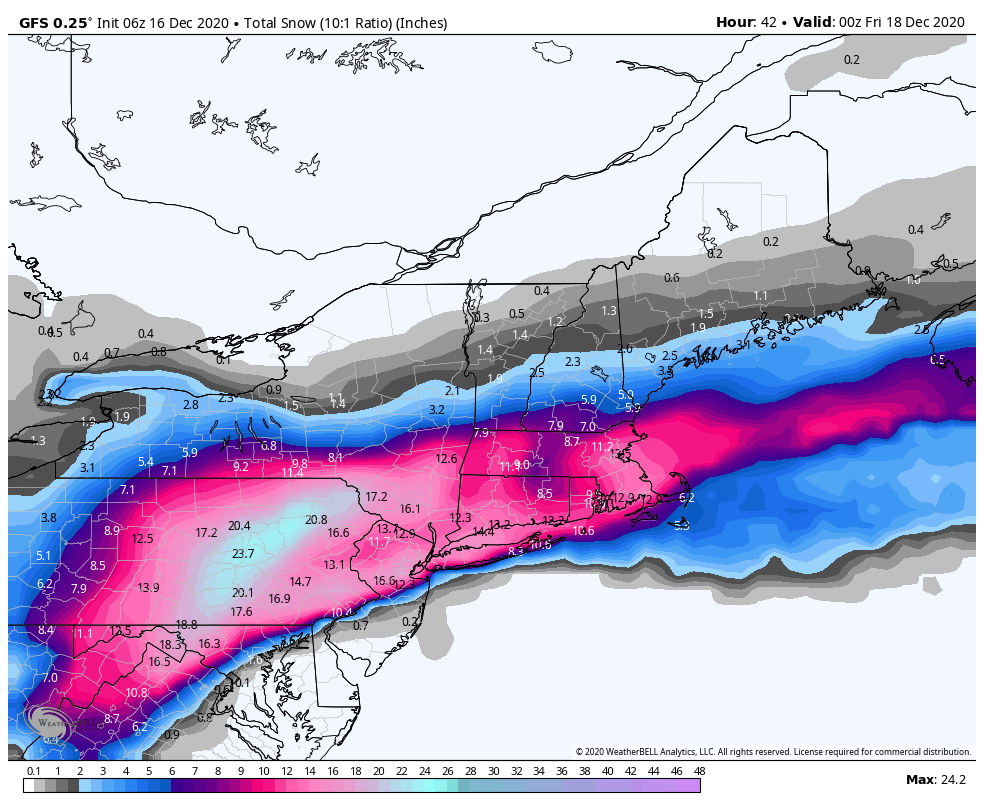 *Heavy snow moves into the Cascades late Wednesday night into Thursday with snow levels around 3,000 feet (Comes in heavy and ends a bit lighter).  This will land a widespread event of 8-14 inches over the entire Cascade Range favoring Washington. The Interior Cascades may also see decent amounts including the northern panhandle. The snow levels lower Thursday morning, so quality may be good with heavier dense snow initially followed by 2-5 inches of decent quality. (Snow level goes from 4,000 to 3,200)-respectable. Ride Thursday. The Oregon Cascades look best with this next storm further south towards Bachelor. The Good: Widespread snowfall for many areas with decent overnight snow. The Bad: A tad on the warm side.

Below: Widespread Snow event for the Washington Cascades into Thursday morning. 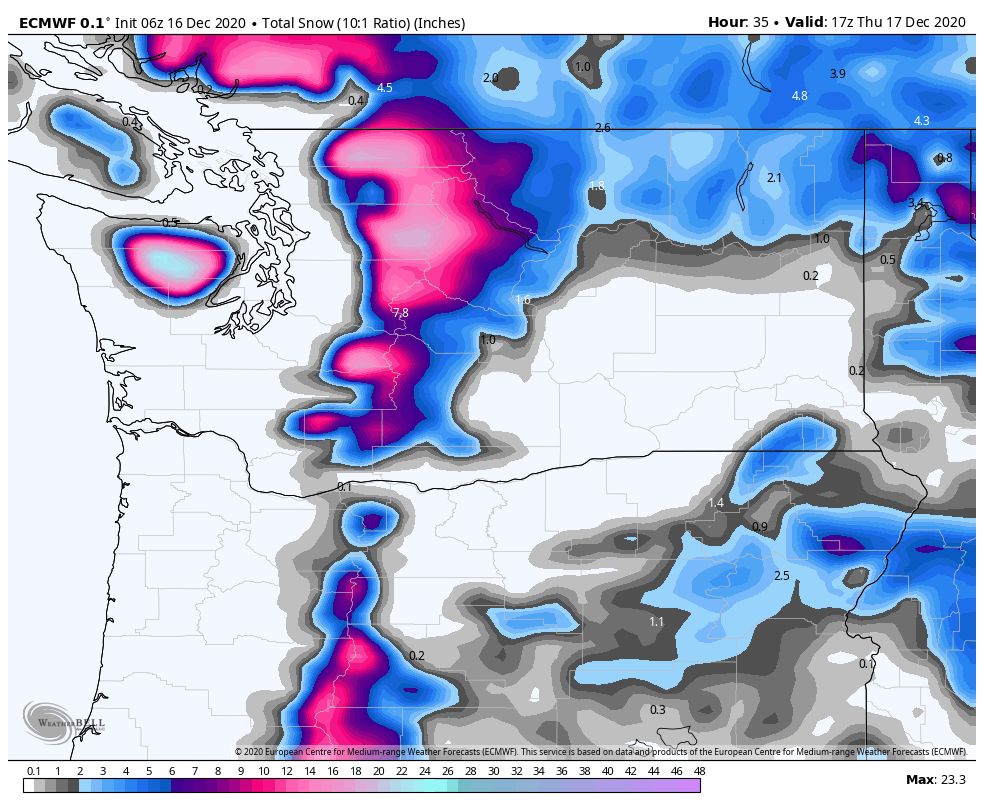 *The Sierra grabs 9-12 inches from late Wednesday to Thursday mid afternoon. The models are showing slightly less around the lake, with more further north near I-80 or further south towards Mammoth. There is a gap that leads me to believe amounts might be less in the core of the lake and more up north or south.

Below: Decent snowfall for Thursday in the Sierra, but the models show the highest amounts possible on the extreme north side of the lake and again further south towards Mammoth. 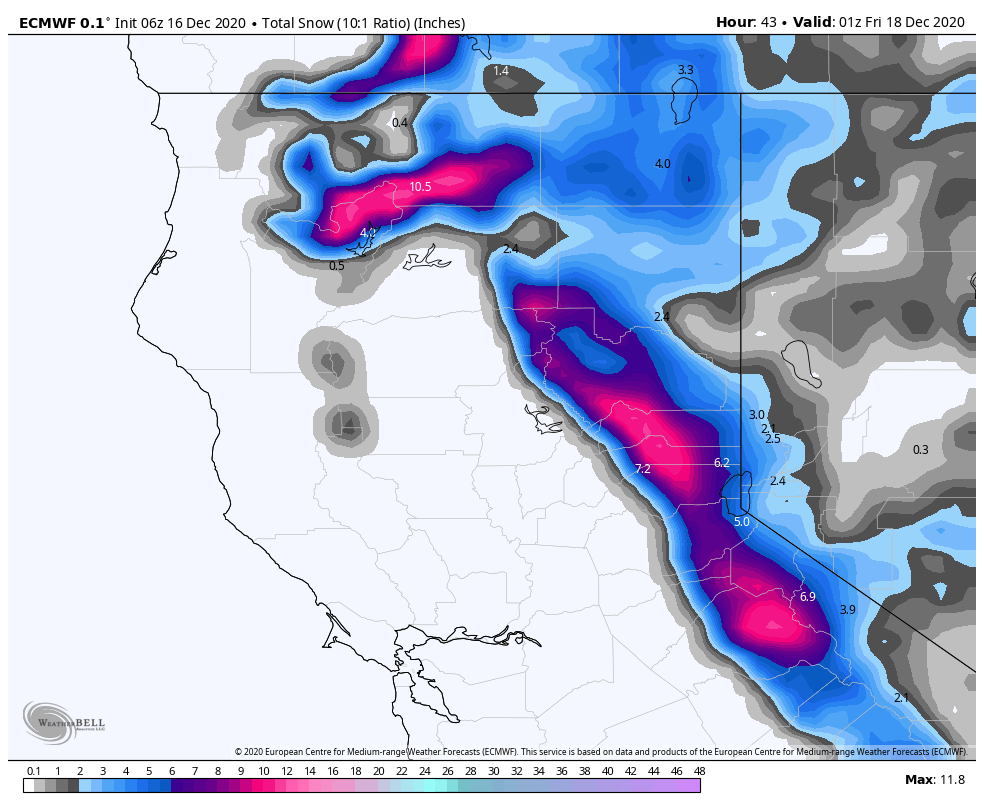 *The Wasatch and Tetons both grab snowfall late Thursday morning through Friday morning. The Tetons will see snowfall pick up during the early morning hours Thursday and end by late evening (6-10). Storm Ski in the Tetons. The Wasatch brings in the heaviest snow from Thursday late AM through late evening. Its possible that that most areas of Utah see 9-11 inches with up to 16 inches in isolated locations. The Northern Wasatch including Beaver Mountain near Logan are in a zone that might over perform as well as Powder Mountain or the Cottonwoods. This storm is well organized and should support a generalized snowfall event for most ski areas of northern Utah. Late Thursday or early Friday may be your best times to ride in Utah.

Below: Average of multiple  ensemble runs shows decent confidence with 7-12 inches for the Tetons through Friday. 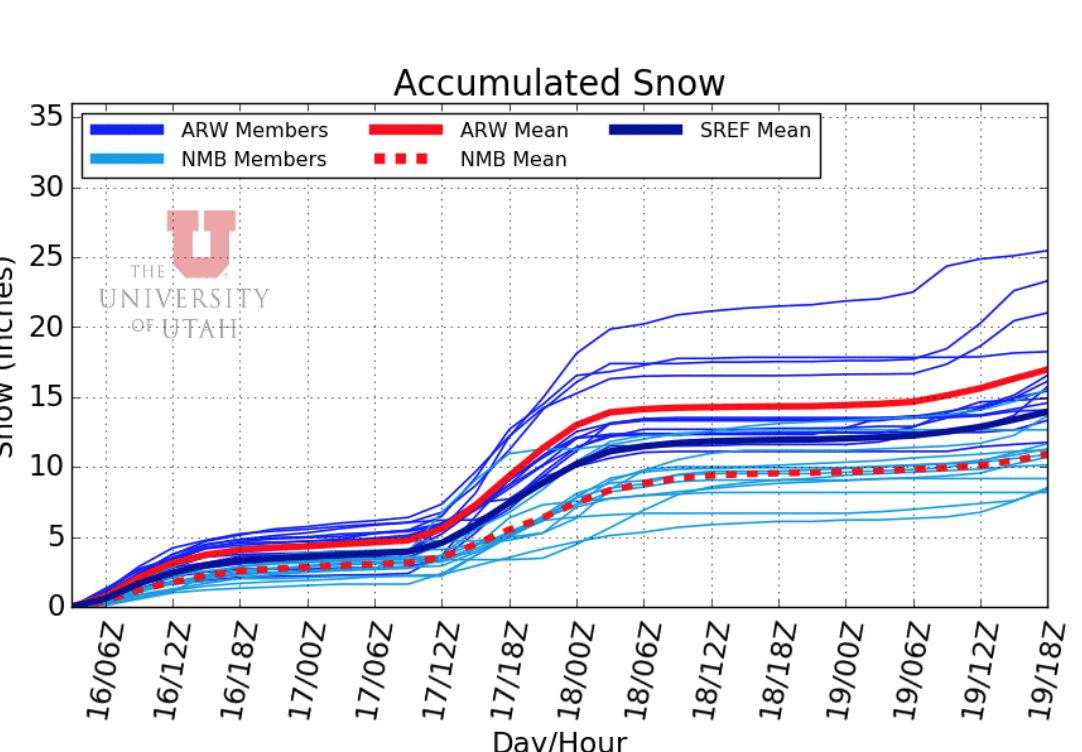 Below: Widespread solutions for the Wasatch with the ensembles showing anywhere from 10-25 inches for Alta by late Friday. The mean is at 12 inches. There is less agreement here. My forecast will remain in the 9-15 inch range by Friday. 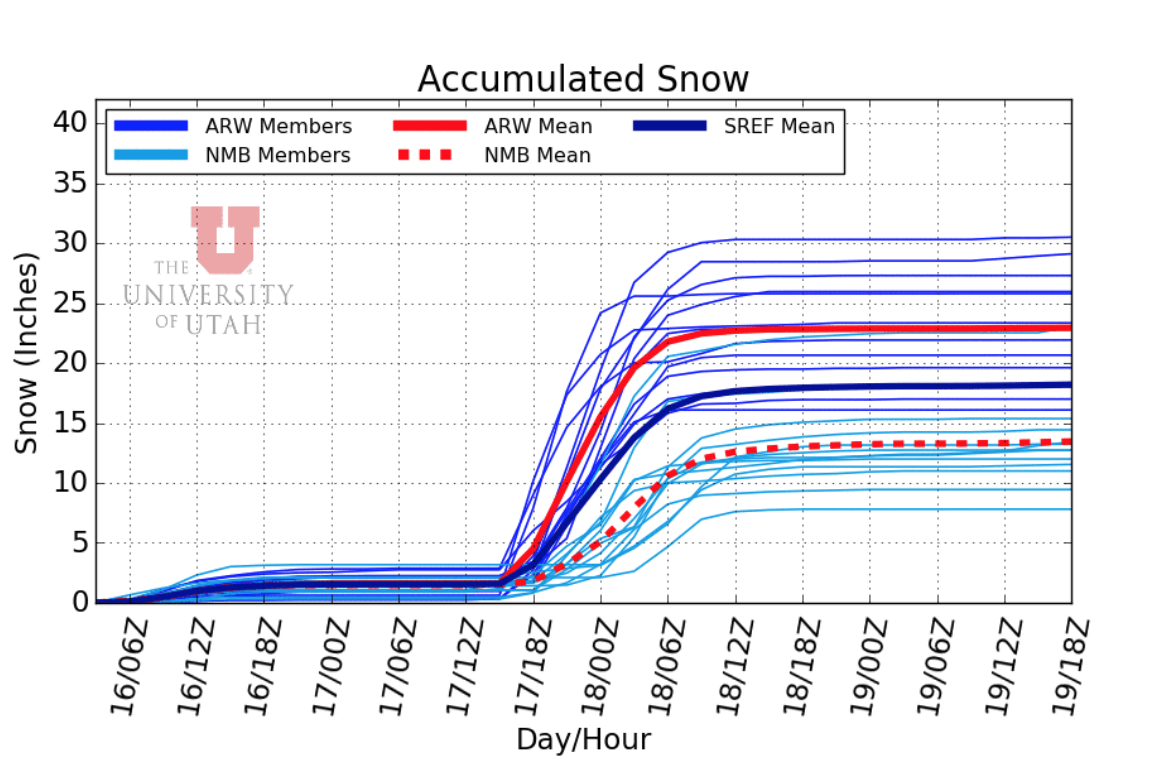 Colorado grabs Leftovers after midnight Thursday into Friday morning. 3-6 inches is a good bet at many areas favoring the northern and central mountains. Areas further west may score the higher end of this range with spots near Summit County less. Steamboat is a wildcard for heavier amounts as well as Telluride. Groomers will be soft with some new snow on Friday morning.  BOO HA.

An Atmospheric River sets up over the Pacific Northwest for the weekend and into early next week. A steady stream of moisture is aimed at the western and interior Cascades. Warm air will accompany this event initially (High snow levels), and will be followed by cooler conditions by Monday. Timing of the warm fronts and cool downs will be tricky and quality may be lacking for much of the heaviest precipitation. Significant base building snow will fall at the mid and upper elevations of the Cascades. The interior Cascades, perhaps near Schweitzer and Selkirk Powder Guides, will be a bit cooler, so very deep wet snow is likely for these areas.

Below: You can see the extended lines of moisture of an atmospheric river headed to the Cascades this weekend.

The Rockies may see this storm at some point near December 23rd.

Announcement- With the colder temps and widespread snowfall, please remember to grab your winter snow tire packages at our sponsored webpage with Tire Rack

Also, we have partnered with a top notch HELI operation in Alaska that we know personally. Check out Alaska Backcountry Guides this season and receive top level service that we know and trust. They are based out of Valdez.