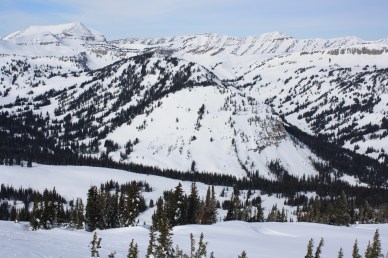 Search and rescue personnel are happy to announce that they have found a lost backcountry skier after he went missing on Monday.

The man was discovered on Wednesday in the upper reaches of Granite Canyon according to a report from Grand Teton National Park officials. He has since been identified as Mike Syverson of Telluride. The 31 year-old male was originally accompanied by Chris Prem of Destin, FL when he left the resort’s boundary.

Although some details remain unclear, it seems as though his partner used alpine touring equipment to return to the resort. He arrived at the top of the tram on Tuesday morning, waking the tram operator and alerting him to the situation. Syverson did not have alpine touring gear and stayed back to wait for rescue.

The resort was closed all of Tuesday and rescue efforts were hampered by avalanche conditions and deteriorating weather. On Wednesday, rescue personnel were able to make contact with the lost skier and began working to get him out of the backcountry at 8am. Syverson was ultimately transported to St John’s hospital at approximately 10:15, where he was treated for cold-related injuries.