In part 1 of this now acclaimed series, we discussed what makes the owner of a pair of Bentchetler’s different from the owner of say– a pair of Dynastar Legend XXL’s.

Related: What Your Skis Say About You As A Person | Ski Stereotypes [Part 1]

Needless to say, we found some quality stereotypes worth exploring. Since covering the ski side of things, we thought we’d expand into another gear-based category that also reflects certain stereotypes we love.

So without further ado, here is what your ski poles say about you as a person.

Are you a spiritual person with leanings toward eastern philosophy? | Photo: Panda Poles

The owner of a pair of Panda Poles likes their poles to reflect their earthy personality. This skier often “rides” on Bentchetler’s, Icelantic’s, or Armada JJ’s and preaches sustainability on the chairlift while wearing a pair of polymer, Full Tilt ski boots whose shelf life is in the hundreds of thousands of years. Either way, this young person is an old soul whose teachings are drawn almost solely from Rumi.

Do you even ski mountaineer? | Photo: Backcountry Skiing Canada

If you’re rocking a whippet, chances are you haven’t skied the resort in over 5 years. During that half a decade, you swapped the ice axe for this ski-mo contraption and never looked back. Since then, you only ski with one other partner and have excommunicated all other backcountry partners due to their lack of commitment to ski-mo. 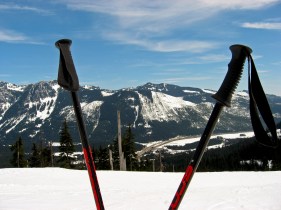 If you’re rocking Scott Rental poles, you’re either the local shredder on a budget or a seriously saavy vacation skier. Either way, your street cred is taken care of by these goverment issue poles that are as utilitarian as they are democratic. God bless rental poles and God bless America!

If King Arthur was a skier, ICE USA poles would have been his excalibur.

These poles are only owned by ski town legends over the age of 30 and if you’re lucky enough to sport the American Flag pole straps, impeccable swing weight, and Wolf brand on the grip– you’re also lucky enough to be considered one of the best skiers on the mountain.

Everyone’s a speed racer with these poles | Photo: Leki

Those rocking Leki World Cup poles are one of three people. The first is a teenage, winter sports club ski racer. The second is a former ski racer turned freerider who hasn’t the time or money to buy new poles. The third is a world cup downhiller whose constant use of spandex clothing has left his genitals with the same curvature of his ski poles.

Kid’s ski poles make sense when you end up like this all the time | Photo: Line Skis

This person complains all the time about ‘Skier’s Thumb,’ skis exclusively urban or park, and has serious lower back problems from leaning forward to pole across the flats. Beware of this person on the groomed stuff too because when they ski groomers– they only do it backwards.