The Best Dirty Ski Joke Of All Time...

The Best Dirty Ski Joke Of All Time... 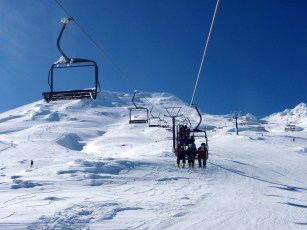 After a long day of travelling, three men arrived at the Denver International Airport and hopped inside a Colorado Mountain Express Van bound for Copper Mountain.

3 hours later, the driver dropped the three men off at the base of the ski area only to find out they made their reservation at Ski Cooper in Leadville– not Copper Mountain near Frisco. So it being just after midnight with sheets of snow falling at the base, the leader of the group ventured inside a nearby lodge and asked the receptionist behind the counter, “do you have anything available for three tired guys who messed up their own reservation?”

“Yes, but all we have right now is a single room with one full-sized bed.”

“You guys cool with this?” asked the leader to which the others agreed, “as long as we can go skiing tomorrow.”

So with that in mind the three men piled into the room, put on PJ’s, and promptly fell asleep– all in a smaller than normal, full-sized bed.

The next morning the three men woke up bright-eyed and bushy-tailed from a great night’s sleep. While brushing his teeth, one of the men turned to the other and said, “I had an amazing dream last night– Katy Perry was giving me the best hand-job of my life.”

Suddenly the other man’s jaw dropped and he replied that he too had a similar dream. “Same thing happened to me but in my dream it was Taylor Swift doing the jerking.”

As the two men laughed, the leader of the group entered the room with rental car keys dangling from his finger and asked what all the laughing was about. “Bill said he had the best dream of his life last night,” to which the leader responded, “your dreams have nothing on mine. I dreamt last night that I was skiing the best powder of my life [insert exaggerated pole plants with both hands].”