When it comes to an industry based largely on snowfall and cold temperatures– climate change costs money and perhaps no resort operator is more cognizant of that fact than Vail Resorts.

Related: Vail Resorts By The Numbers

In their recent $1.3 billion dollar acquisition of Whistler Blackcomb, the Broomfield-based giant is creating a culture of diverse ski resorts that make its Epic Pass much more resilient to the effects of climate change than most of its competitors.

Perhaps the importance of that diversity became crystal clear prior to the past season in California, when Heavenly and Northstar (both Vail Resorts) saw historically low snowfall totals for 4 years straight. During those drought ridden years, Epic Pass holders continued to ski– albeit at other Vail Resorts in Colorado. Bottomline, Vail is putting its largest focus on reinvesting its capital to make sure other resort groups aren’t burning holes in their investor’s pockets.

When Vail Resorts started negotiating to buy Whistler Blackcomb, executives quickly found a resort that was burning a hole in its pocket. 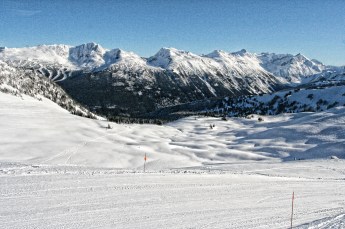 Since the buy, Vail has created the ultimate game of ski condition musical chairs. When it rains in Whistler, Epic Pass holders can head to Colorado. And when drought strikes California, its pass holders can head north and ski Whistler. The same goes for its midwestern resorts as well as the resort groups ability to boast the opportunity to chase an endless winter to the southern hemisphere and ski Perisher. All in all, Vail just cornered the post climate change market and now the pressure is on other resort groups to make the same, climate-focused acquisitions.