Skiing 200 Consecutive Days A Year, Every Year With Matt Shortland

Skiing 200 Consecutive Days A Year, Every Year With Matt Shortland

He’s been waking up to shred for at least 200 consecutive days four years running. All of us who obsess over “stuff” and shrug off days where the conditions don’t line up could learn a thing or two from this maniacal man. Shortland, who is a Missouri to Montana transplant, now takes full advantage of his beautiful surroundings on skis– everyday, every year, 200 days straight.

We sat down to try to absorb some stoke from this meat hucking, veggie-belaying, brewery-to-brewery ski touring fanatic and in the process were reminded that there are few things in life sweeter than skiing.

UN: How old are you and when did you start skiing?

M: 29 going on 14. Started skiing when I moved to Bozeageles (Bozeman, MT) 10 years ago for school and was completely hooked.

UN: Where are you from?

Matt: Lake of the Ozarks, MO. Not exactly known for snow. I grew up doing a little bit of water skiing and played hockey in high school. Missouri hockey is like the goon squad, pretty much the kids that weren’t good at football, basketball, or baseball could play club hockey. I threw a lot of ‘bows and fought a lot.

UN: How many days have you skied this season?

UN: How many were consecutive?

UN: How many years have you been skiing a nutty number of days like this?

M: I pretty much only keep track of the consecutive ones. This was my 4th season of over 200 consecutive days. The first year was a good snow year, we had lots of good days all of October. Day after Halloween I took a day off cause I was hung the fuck over. The next day, went up for a shred, it was November 2012.

UN: What was your “ah-ha” moment with skiing?

M: My first year out here I pretty much just flailed around Bridger Bowl.  But, I met tons of really great, nice people in the ski community. People were super welcoming, easy to talk to, and would do what they could to help me out.

UN: What was the schedule that first winter?

M: I managed a Papa Johns that winter as I was getting residency for school. I’d close down PJ’s at 3AM, get a few hours of sleep, then get up for an early shred at Bridger. It was worth it. 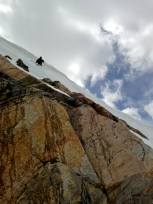 UN: When and where does your ski season start?

M: Most years we can start skiing up at Fairy Lake Mountain Resort, a super popular area in the northern Bridgers. There’s a 5 mile forest road that takes you up to some nice bowls and chutes that get nuked with wind. You can be couloir skiing in September and October. Freshmen will drive up in their Mom’s Volvo with Rhode Island plates without snowtires or a clue.

M: Preseason skiing is hard because you have to keep your stoke in check. I took a pretty good digger 7 years ago and smoked my head pretty good. Obama had just became President and my buddies asked me what day it was and who was President. I said George bush and a date like 6 weeks earlier. No one wants to go back to Bush.

UN: Where do you ski during what the rest of us consider ski season – mid December through April?

M: I mostly ski at Bridger Bowl. I started doing the snow reporting and Daily Videos a couple seasons ago. I have 4 days off though, so I definitely take trips if the conditions are right. There is a lot of terrain to explore around SW Montana, and SLC is just a 7 hr drive away.

UN: When and where does your ski season end?

M: It depends on the year, sometimes there is rad skiing into July. I’ve found myself shredding August and September as well. Most years mid to late June I give up and start working.

UN: In the past I’ve heard you reference the need to use “veggie belays,” and do some lower mountain “combat skiing” what on earth are those things?

M: Veggie belay is when you have to use some vegetation- trees, bushes, grass- to get you down into something. Its really fun, and I think that PSIA will be teaching this skill soon. There are lots of sweet places at every mountain that don’t get shredded because they require some form of veggie belay.

Combat skiing is actually a lost form of martial arts that was developed in Japan just after the Chorizo Dynasty. It gets spicy. Pretty much you just leave your skis on till the very end.

UN: How do you stay healthy enough to keep skiing everyday? The basic nature of skiing would seem to suggest that after 200 days you’re going to have a few bumps and bruises.

M: I call it “sustainable skiing.” Pretty much I ski at a 7 on an 11 scale.  It took me years to figure out my balance point. I haven’t had a major injury (knock on wood) but plenty of tweaks and strains have made me back off a little bit . I’ve found my zone. I will definitely kick it up to 9.69 or even 10.69 when the conditions and stoke are right, but I’m not in it to impress anyone.

UN: What was the sickest day of your winter?

M:A couple of buddies and I skied from just South of Bridger Bowl out the West side, across neighborhoods, roads, fields, and into town. We hit 4 breweries on our skis. I’m calling it the Backcountry Brewery Tour. So many other days too, but I’m not into spraying unless I’m on the chair or in the bar. Then you better have yer goggles on.

Save up some funds and send it into next ski season like Matt! | Photo: Dan Ryan

UN: What advice would you give to people out there looking to maximize their ski days?

M: Don’t get jaded. Don’t scoff at marginal conditions. Skiing in all conditions is a treat that most people don’t get. Also– “Stuff.” People like to not go skiing because of “stuff.” I think it’s the number one killer of skiing. Pretty sure that you can figure out your “stuff” and still go out fer a rip.