While heat waves continue to shatter records across the west, Accuweather.com is already looking to the winter, the oncoming La Niña, and its cold, snowy relief.

According to Accuweather’s lead long-term meteorologist Paul Pastelok, the Pacific Northwest and Northeast are projected to receive the most snowfall this season, which should be accompanied by colder than average temperatures. Flipping to the other side of the coin, it looks as though much of the Southwest will continue to experience drought conditions. Sorry California…

After being the epicenter of snowfall this past season, meteorologists are calling for back to back above average snowfall for the Pacific Northwest. That comes as welcome news for a state that was struggling with some of its worst wildfires in recorded history this time last year.

Much like Washington, Oregon is set to benefit from a La Niña influenced jet stream. Look for Oregon’s interior mountains to receive blower snow created by below average temperatures throughout the winter.

Idaho usually benefits from La Nina jetstreams and this year’s “weak La Niña” event should push the Sawtooths, Sun Valley, and Schweitzer into the black as far as snow is concerned.

Jackson residents have their fingers crossed for a repeat of the 2010/2011 La Niña season that saw over 800+ inches of snow atop the Rendezvous Bowl when the tram reopened on Memorial Day weekend. However, current forecasts are putting this event as weak at best. The 2010/2011 event was one of the stronger “moderate” La Niñas in recorded history.

That said, look for an average snowfall year in Jackson— Which at 425″ a year is a win in itself.

After a pretty marginal 2015/2016, La Niña is forecasted to return to Montana and coat its peaks this upcoming season. All in all, skiers and riders can expect snow totals to be slightly above average at places like Big Sky and Bridger Bowl.

Nobody on the east coast wants to talk about last season but with La Niña forecasted– there’s plenty of stoke to go around concerning the upcoming season. Cold temps and adequate snowfall should return to the northeast and provide some areas with above average snowfall (see below).

According to Accuweather, southern New York is forecasted to receive above accumulations as a result of cold systems picking up lake effect moisture throughout the season. Those systems could eventually move inland and create good conditions throughout the Adirondacks.

Look for interior British Columbia and its famed “Powder Highway” to receive abundant snowfall and cold temperatures this year. While Whistler Blackcomb is more of a tossup, the coast mountains should see cold temperatures, which could provide for light snow at low elevations. 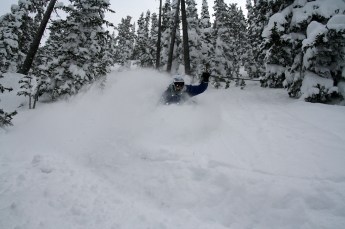 Utah sits in El Niño/La Niña”  no mans land and the central state in the west usually benefits from systems influenced by both phenomena. That said, the cooler temperatures and deep freeze events could cause similiar avanche conditions as last year.

Southern California looks to remain in severe drought conditions and the Sierra should see a similar weather pattern. This is horrible news for Tahoe locals, who just got a tasty reminder of what a snowy winter feels like. Not again!!!

Along with other members of the southwest, New Mexico looks to be lacking in precipitation this season but could benefit from late season storms caused by ocean surface temperatures transitioning back to neutral in late March/early April.

Arizona will likely be relying big time on snowmaking this year as La Nina often leaves places like Arizona Snowbowl high and dry. Sorry guys, I know it’s hard to hear this while you’re sitting in 122°F heat waves.