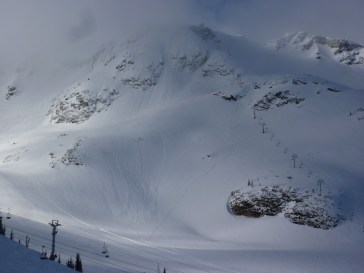 If only there was a Powder Day toggle on the NOAA website… | Photo Credit: kcxd

Have you ever wondered how NOAA makes weather predictions for millions upon millions of data points across the country?

You’re not alone. However, in a newly published article, NOAA gives its users an inside look as to how they forecast the weather. From snowfall amounts to weather alerts, here’s how NOAA comes up with all their weather predictions.

Related: Interview With The Forecasting Experts At The National Weather Service

At data centers in Virginia and Florida, NOAA’s supercomputers are on the job nonstop.

Dutifully processing 2.8 quadrillion mathematical calculations per second around the clock, these computers — each about the size of a school bus — are the nucleus of weather and climate forecasting in the United States and the calculations they make are the foundation of NOAA’s life-saving weather predictions.

Every day, the supercomputers collect and organize billions of earth observations, such as temperature, air pressure, moisture, wind speed and water levels, which are critical to initialize all numerical weather prediction models. All these observations are represented by numbers.

How does NOAA observe the planet?

The supercomputers then plug these observations into a series of mathematical algorithms that represent the physical properties of the atmosphere and predict what will happen globally up to 16 days into the future. Using observations of the atmosphere’s current state mapped to a model grid, the equations help predict the formation, intensity and track of complex weather systems, which take into account how they influence each other and underlying atmospheric patterns driving their behavior. Smaller grid spacing closes the gap on observations in time and space, resulting in higher resolution model output that is more accurate and reliable.

Using math to model the future state of the atmosphere is called numerical weather prediction, a branch of atmospheric sciences that was pioneered after World War II, but really took off in helping make reliable weather predictions in the U.S. in the 1980s with advancements in computing and the development of the global model system. Today, powerful supercomputers and advances in modeling capabilities continue to improve weather, climate, and water prediction, especially for extreme events.

NOAA runs numerical weather models operationally to predict global weather, seasonal climate, hurricanes, ocean waves, storm surge, flooding and air quality. As gains are made in supercomputing capacity and power, models are upgraded to take advantage of the growing volume of earth observations. Although no single model is accurate 100 percent of the time and observations are imperfect, access to a wide range of models with different abilities, strengths, and characteristics allow scientists to run ensemble forecasts with perturbed initial conditions or physics, helping increase certainty in the prediction. Model agreement leads to higher certainty in forecasts. If the models are not in agreement, forecasters can present that uncertainty to the public.

While observations, supercomputers and models are foundational tools for predicting the weather, the skill of meteorologists is critical to the process of generating forecasts and warning the public of weather threats. Improvements in weather information enable forecasters to support public safety officials in better anticipating and preparing for the impacts of weather events.

NOAA prioritizes improvements in weather forecasting as we build a Weather-Ready Nation. Today’s forecasts and the improved forecasts of the future are made possible by sustained investments in observing systems, weather and climate models, and the supercomputers that power them.