Climate Change is taking its toll on ski areas from coast to coast but perhaps nobody is feeling the pain quite like Beartooth Basin.

The summer ski area located in southern Montana usually opens on Memorial Day for a short summer season that includes summer moguls, freestyle, and big mountain camps but not this summer. Due to a low snow year and unseasonably warm temperatures, the ski area will once again halt operations for the second year in row.

“Due to the lack of snow, Beartooth Basin will not be operating the lifts as scheduled for the 2016 season. However, we will be performing annual and differed maintenance with some snow farming once we gain access to the site. In the event of a few miracle May storms we might have enough snow to open for a week. Lift or no lifts, there will be snow to ski this year on the pass once it opens Memorial Day Weekend. The spirit of skiing is still alive on the Beartooth, we’ll just need your human-powered energy to keep our summer ski community strong in this dynamic climate.” 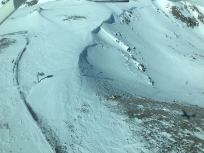 That news comes to the chagrin of skiers from around the country and while resort officials are hoping for a rogue May storm to allow for operations, they’re not holding their breath. For the time being, Beartooth Basin’s lifts will remain closed but human powered skiing is heavily encouraged.