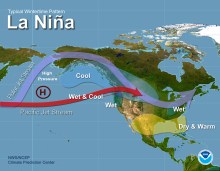 This past year’s “Godzilla” El Niño was either a godsend or a disappointment depending on who you ask. However, one of the strongest El Nino’s in recorded history might be giving way to its step sister, La Niña reports NOAA’s ENSO blog.

“A transition to ENSO-neutral is likely during late Northern Hemisphere spring or early summer 2016, with an increasing chance of La Niña during the second half of the year.” – NOAA

The report is calling for a favorable chance of La Niña conditions developing over the next 6 months– which could arrive just in time for a big and cold winter across the northern half of The United States.

What is La Niña?

In the meantime, the majority of forecast models agree that El Niño is weakening and should transition to a neutral state this summer before giving way to La Niña conditions this fall– fingers crossed.

Related: Could We See A La Niña For Next Season?