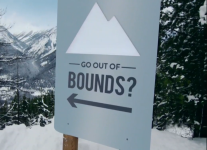 After asking the proverbial question, “will you brave going out of bounds?,” the most recent Molson Coors Canada ad has received an answer from the search and rescue community.

Immediately, the controversial TV commercial became subject to an avalanche of criticism, which has resulted in Coors pulling the ad in leu of its reckless message reports North Shore News.

The Out Of Bounds Effect…

The point the ad makes is that it’s cool to “go out-of-bounds” even if those venturing beyond the boundary are unequipped and uninformed. That message hit especially close to home after a 40 year-old snowboarder from Surrey perished outside the boundary of Cypress Mountain back in January. The volunteer based, North Shore Rescue were the ones who ultimately found the man’s body.

The Molson Coors Canada manager of public relations, Greg Vallentin said in a email statement that the ad sought to “highlight the fact that any moment can be an opportunity to step out of your comfort zone and find adventure.” That said, the statement also indicated that Coors will be taking down the ad.

“We have the utmost respect for our drinkers, and the thousands of search and rescue professionals across Canada who risk their lives daily and would never want to make light of a situation that could, or has, negatively impacted someone, or their friends and families.”– Greg Vallentin, Molson Coors Canada manager of public relations

According to North Shore News, a donation to from Molson Coors Canada to the Search And Rescue Association is forthcoming.