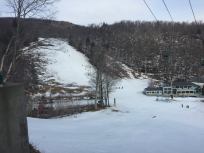 Following a banner season on the east coast and four years of below average winters in California, the tables have turned. Nowadays, Mad River Glen is the self proclaimed “Revenant” of ski areas (not a good look) and the Tahoe area has been sporting a snowpack that’s remained over 100% of normal for the majority of the season.

Disclaimer: Recent warming has dropped the Tahoe area to 97% of normal but that should change as a significant storm is headed for the region later this week.

The result of this flip?– a downtick in national ski sales reports Snowsports Industries America. According to the report, national sales related to snow sports have plummeted 4%! Many industry experts attribute that drop to warm temperatures plaguing the midwest and northeast this season.

“Sales in the snow sports market nationally were down 4% in dollars sold to $2.85B through December 31st this season.  Although the Pacific West was finally getting relief from a four year (or longer) snow drought, retailers in the East and Midwest were suffering from a lack of winter weather and corresponding lack of winter gear sales.”– Kelly Davis, Director of Research at SIA.

The drop in sales is especially astounding considering the Western United States saw a significant uptick in ski-related sales. Among the more notable statistics, the ailing snowboard industry saw sales rise 25% in the western states but snowboarding sales still plunged 4% nationally. Touring gear, which has been touted as the hottest gear on the market, is feeling the pain as well with a 8.3% national decrease from the year before, which stands in direct contrast to how full the Berthoud Pass parking lot is these days.

Find the entire SIA article here: The December Snow Sports Market Saw Snow in the West, Suffering in the East