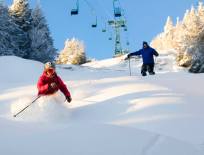 Presidents’ Day is upon us and a 3 day weekend is open to all the working stiffs itching to make some turns. While the southwest remains under the plague of a high pressure ridge, there are still a few spots to score powder turns this weekend.

With 37″ in the forecast over the next 6 days, take on an ex-patriot persona, fly to Geneva, and head straight for the La Flégère tram. Vive La France!

As Vermont has been mostly dry this season, a new storm has proceeded to dump on central Vermont, with Sugarbush and Mad River reaping some of the highest snow totals.

Mad River Glen is the Revenant of ski areas! With 18″ falling in 24 hours, Mad River is back on the docket to open this weekend and more snow accompanied by cold temps remains in the forecast.

Whistler Blackcomb is currently listed to receive the second most snow in North America over the next 6 days according to wepowder.com. Stack that ontop of a healthy base and we have powder turns people!

The El Niño anomaly continues as Mt Baker Ski Area continues to get crushed by snowfall this ski season. Initially, we had Mt. Baker as one of the places to avoid this year and we couldn’t have been more wrong. Turns out it’s the #1 place to grab powder this weekend in North America.

Also Read: Up To 49″ For Mt. Baker Ski Area Over The Weekend! The Joyous Misery of Being A Skier We Have Your 7 Day Powder Forecast