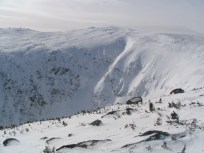 On Sunday, two Canadian climbers triggered an avalanche while attempting an ascent of “the chute” on Mt. Washington in the Tuckerman’s Ravine area. The slide caught them as well as two skiers, who were not in their party.

So far the US Forest Service is reporting that two of the people involved in the slide are recovering from non-life threatening injuries.

According to the Concord Monitor, the avalanche accident happened in the early afternoon hours on Sunday. The climbers were headed up the route when the snow suddenly switched consistency. All of a sudden, the snow at higher elevations consisted of loose, windblown snow. Once they noticed the change, the two climbers decided to retreat. At that point, a section of snow broke loose above them and subsequently engulfed the four people in the area. 5 inches of snow had fallen on Tuckerman’s the previous day, which was also accompanied by 60mph winds.

The Avalanche Danger was posted as considerable for the Mount Washington area at the time of the incident.