The Top 5 In-Bounds Lines In The USA

The Top 5 In-Bounds Lines In The USA

Image from TGR of Corbets

A ‘line’ unlike a run or zone has one main route for a descent. Also, skiing ‘lines’ makes any skier sound like they’re getting more rad than just skiing ‘runs.’ To the same extent a mountaineer ascends a line, so do extreme bros ski lines.

So if lines are rad and bro’s ski lines, then by the transitive property bro’s who ski lines, are rad bro’s…

Here are the Top 5 Inbounds Lines In The Country

A classic couloir from top-to-bottom, Pipeline Couloir was opened up by Shane McConkey’s dad Jim McConkey and to this day serves as a proving ground for Little Cotton Wood Canyon Skiers. On a good day, Pipeline can offer some of the best fall line skiing in the lower 48.

The ‘Little’ is the prominent couloir on the right of Lone Peak | Photo Credit: Andy Eick via Flickr Creative Commons

The little brother of the Big Couloir, the Little Couloir is actually the rowdier of the two. The entrance is tighter and the pitch is steeper than its big bro and falling at the top can take you a full 1,000 vertical down one of the steepest inbounds lines in the country.

Originally named the Eagle’s Nest, McConkey’s is the most technical line @Squaw. A few well timed turns to a big air in front of the peanut gallery makes this line the definition of the GNAR. You just gotta ask yourself one question: do you feel lucky? 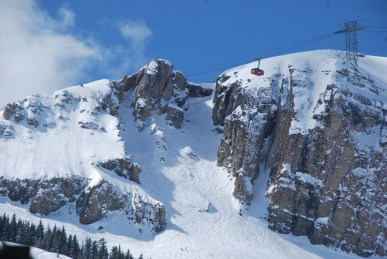 A perennial classic and often overhyped as the hardest inbounds run in the USA, Corbet’s Couloir is still as rad as inbounds lines get. Those people who look down on the line as a scraped off goat path have most likely never made it to the  3rd and 4th turns successfully. A week after a big storm, the 2nd half of the couloir usually offers the best snow on the mountain.

Dr. Huckinstuff (See: Jeff Leger) got his PhD on the Center Line of the Chimeny @SquawValley. A classic and straight up monster huck, the Center Line is reserved for anyone with the balls to get after it. You can be Jerry’s mother Jerralina and get in there. Most likely you’ll hot-tub, tomahawk, or just fully explode but whatever the case, if you stomp you’ll be inducted into a small club of people who’ve stuck the line in the last 3 years.

Also Read: The Top 10 Resorts for Chutes and Steeps in the USA