NOAA: El Niño Is Now The Strongest Ever Recorded!

NOAA: El Niño Is Now The Strongest Ever Recorded! 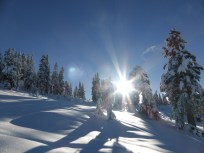 When skiers talk about El Niño and epic snowfall, they normally refer to the legendary season of 1997-1998. However, the 97/98 season is no longer the benchmark as this year is now the strongest El Niño in recorded history!

According to NOAA, the equatorial pacific ocean reached 3.1º celsius above its average temperature on November 18th and is showing minimal fluctuation. The previous record was held by the 97/98 phenomenon, which topped out at 2.8º celsius on November 26th of that year.

What does that mean for snowfall?

Well, when considering  Kirkwood got 588 inches during the 97/98 season, El Niño’s impacts in the southwest speak for themselves.

That number is mainly due to the shift of the subtropical jet stream, which during El Niño years, typically moves south, bringing with it surplus accumulation of snow and rain to the southwest. Seeing as California is currently experiencing the worst drought in recorded history, this comes as welcome news.

Right now, the Sierra’s are boasting a snowpack that is at 108% of normal and with a major winter storm on its way, that number should increase by the end of the week.

In an interview with the New Scientist, Axel Timmerman said, “Monthly and weekly central Pacific temperature anomalies clearly show that this current event has surpassed it [the 97/98 El Niño].”

However, across the globe, not all the effects are so welcome. In Indonesia, El Niño related wildfires are ravaging the countryside, causing mass devastation.

-Also, the onset of such a strong El Niño means that the chances of a La Niña phenomenon is more than twice as likely to happen during the following year bringing with it polar opposite meteorological effects. NOAA: El Niño Is Officially Done And What That Means For Winter 2019/20 Weather