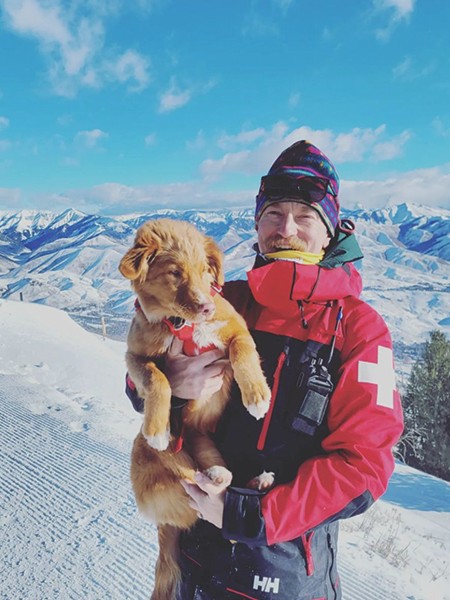 Article written and published by our friends at Sun Valley:

The history of avalanche search dogs traces its beginnings back over 1,000 years to the year 980 when Bernard of Menthon built a monastery and inn at the top of St. Bernard Pass.

It was a blessed refuge for travelers as they made their way through the rugged terrain in Switzerland’s southern Alps and soon monks became a search and rescue team when travelers became lost or buried by avalanches.

The dogs the monks kept and bred eventually became known as St. Bernards, known for their incredibly keen sense of direction even in the worst conditions.

Credited with saving untold numbers of mountain travelers through the centuries, St. Bernards became a fixture at early ski resorts in the European Alps and soon after in European inspired ski resorts around the world like Portillo, Chile and of course, Sun Valley, Idaho. 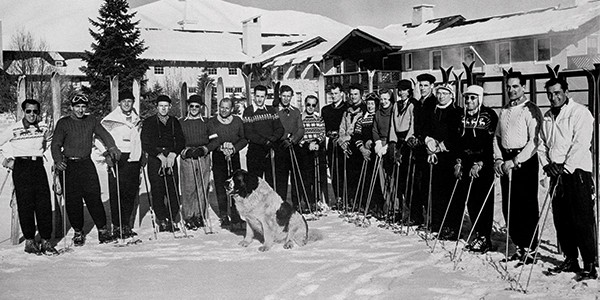 As far back as the First World War, modern search dogs were being trained by the Red Cross to locate wounded soldiers on the battlefield by their human scent.

The first recorded rescue of an avalanche victim by a dog took place in the winter of 1937-38 when a search party’s dog showed continued interest in one particular spot, which had already been probed.

When the dog started barking incessantly and the area was re-probed, the victim was found alive. This incident led a Swiss dog training expert to specifically train four Alsatians to search for avalanche victims, then presenting them to the Swiss Army creating the first modern avalanche search dog program.

In World War II, search dogs were used in London to great effect, locating survivors beneath the rubble after bombing raids. 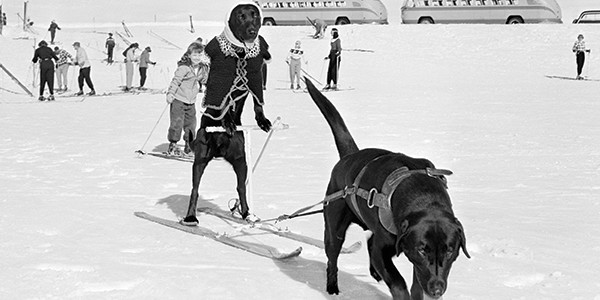 Previously, search parties would line up, inserting a long thin rod into the snow at pre-determined intervals in the hope of feeling the rod strike a body. While this method was very thorough, it was also very slow limiting the likelihood of finding the victim alive.

The dogs were immediately successful and Swiss-style avalanche dog training centers became widespread throughout the Alps. Today, avalanche dogs help search-and-rescue teams around the world — from the French Alps to the Himalayas of Nepal.

Across the United States, they are mainly employed by ski resorts and nonprofit groups. A well-trained avalanche rescue dog is equivalent to approximately 20-foot searchers (if the victim isn’t wearing a modern avalanche transceiver) and can search the same area in an eighth of the time. There have even been confirmed reports, in optimal conditions, of a search dog in Austria locating a body 40 feet beneath the snow! 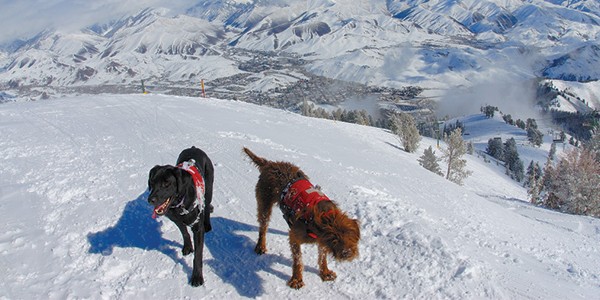 Since those early St. Bernards, Sun Valley Resort’s Avalanche Dog program has waxed and waned. Increases in technology and avalanche control work, along with the difficulty of retaining qualified handlers, and properly trained dogs all played a part.

At some points, there was a robust avalanche dog program at Sun Valley with two teams on the mountain every day that had rescues and recoveries. While the past few years have presented several challenges to the avalanche dog program, that’s all starting to change thanks to the hard work, devotion, and enthusiasm of a few Sun Valley Ski Patrollers. 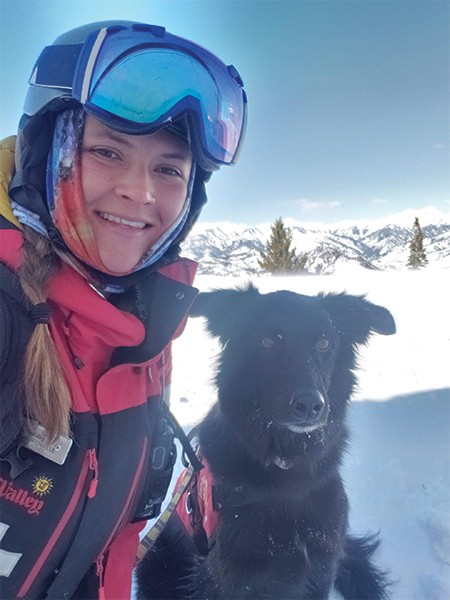 Sarah Linville, the head of the SVSP’s Avalanche Dog program, and her dog Blaze, a seven-year-old mixed breed, started training together in 2017 and are now a nationally certified team.

“Blaze is high energy, but is a great search dog,” Sarah says, “he’s a mix of some sort of retriever, Border Collie, and possibly Australian Shepard. Dogs are individuals just like people, and if there were one way to train an avalanche search dog, we’d all be doing it.

But it’s more tailored than that and I love learning more about Blaze the more I work with him.” Since taking over the SVSP Avalanche Dog program in 2020, Sarah has worked hard to bring progress and more stability to it.

New additions to the team include Hailey Hagerty and her avalanche dog Ripley.

“Training avalanche rescue dogs has always been my dream,” Hailey says, “they have such an incredible sense of smell and are by far the best tool we have as Ski Patroller’s to search an area where a skier or snowboarder is buried without a beacon quickly and efficiently.”

“As a puppy, we started her with simple games of runaways or ‘hide and seek’ and worked our way up to finding up to two people buried in the snow.” Hailey says, “This season our goal is to get ready to validate, which is a test to certify the dog is ready to be deployed on an avalanche search.”

Hailey’s first dog, Ava, has had a long and successful career in Arizona and is now starting her retirement but will be a helpful mentor getting Ripley ready to…well…rip.

Sun Valley Ski Patroller Kent May and his dog Wally

Kent May spent six years working at Alyeska Resort in Alaska as a Ski Patroller and Avalanche technician.

Once back in Idaho he spent four years working as an Avalanche Forecaster for the Forest Service and Idaho Transportation Department before moving to the Wood River Valley to be closer to family and is now part of the SVSP Avalanche Dog program with his retired nine year old Duck Tolling Retriever Monty, along with the youngest member of the program, Wally, a five-month old Duck Tolling Retriever.

“Wally is currently learning all the basics of puppyhood,” Ken explains, “this winter we’ll be focusing on him learning how to handle being at the ski area, riding lifts and snowmobiles and staying safe around skiers while also starting to learn the basics of avalanche rescue and becoming a cohesive part of the Sun Valley Ski Patrol family.”

Mollie McLam has been working with avalanche dogs since college and has been part of the SVSP and its Avalanche Dog Program since joining the team in 2014. Her new pup, Maverick, is a one-year-old German Shepard/Lab mix who has just started his training. “This season, we’ll be working with Maverick and getting him to gain a firm understanding of avalanche searching with the end goal of getting him validated (certified) as an avalanche search dog.”

With devices like avalanche beacons and probes, using dogs to find people buried in snow may seem archaic. But despite all the new technology at the Ski Patrol’s disposal, all the handlers agree that search dogs still remain an industry standard.

They are absolutely essential when there’s an unwitnessed avalanche and it’s unknown if anyone is trapped. “A dog like Blaze can run through acres of an avalanche path and quickly determine if anyone is buried,” Linfield explains, “and that keeps everyone enjoying the mountains a lot safer, which is why we work so hard to train and integrate them on the slopes.” 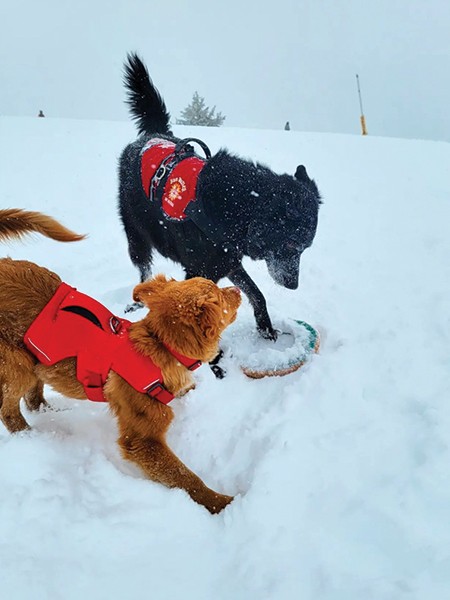 Blaze and Wally hard at work!