Western Snow Is Back In The Forecast!

Western Snow Is Back In The Forecast!

WESTERN SNOW IS BACK IN THE FORECAST!

Ahhhh, that was a good title to write. After a long stretch of warm temperatures, no new snow and dwindling snowpack numbers, there are a few chances of snow in the forecast. Now don’t get too excited because this incoming storms won’t be as epic as the ones over the holidays but they will be providing us with a nice refresh and enough new snow to play on for a few days at a time.

Our first storm we are tracking is happening right now. It’s a little bit sloppy of a storm setup but a couple swirls of energy are merging over the western US so snow locations will vary based on locations of best winds – which will be hard to pinpoint due to the sloppy nature of this setup.

One weak swirl is rolling down the western coast while another one is riding down the east side of the Rockies. These two will eventually merge and push east.

Since the storm is currently happening, near-term models have a good grip on what will likely fall by Thursday night and in most locations, a nice refresh can be expected.

The Cascades and Sierra Nevada will not be the winners of this particular storm but a measly inch or two is possibly. Even though it’s not much, it’ll be enough to break the snow drought some are experiencing. The northern Rockies will see a decent coating by Thursday morning with areas around Schweitzer and White Fish getting up to a half foot of snow. The Tetons could also fair well with east slopes fairing well. Utah to Arizona will see a several inches of snow so conditions on Thursday to Friday should be nice and soft. Colorado and New Mexico might fair the best with this setup as winds will be most favorable widespread across the region. Up to 10” or a foot of snow is possible around Telluride and Purgatory. Taos should fair well with this storm too.

After this storm, we will dry out and warm up region wide but another storm looks to be moving in by the end of the weekend into early next week. This one looks a little healthier right now. It’ll swing down from BC on Sunday to the Four Corners region by Tuesday. It has the potential to bring a widespread powder dump to many locations from the Cascades to the southern Rockies. 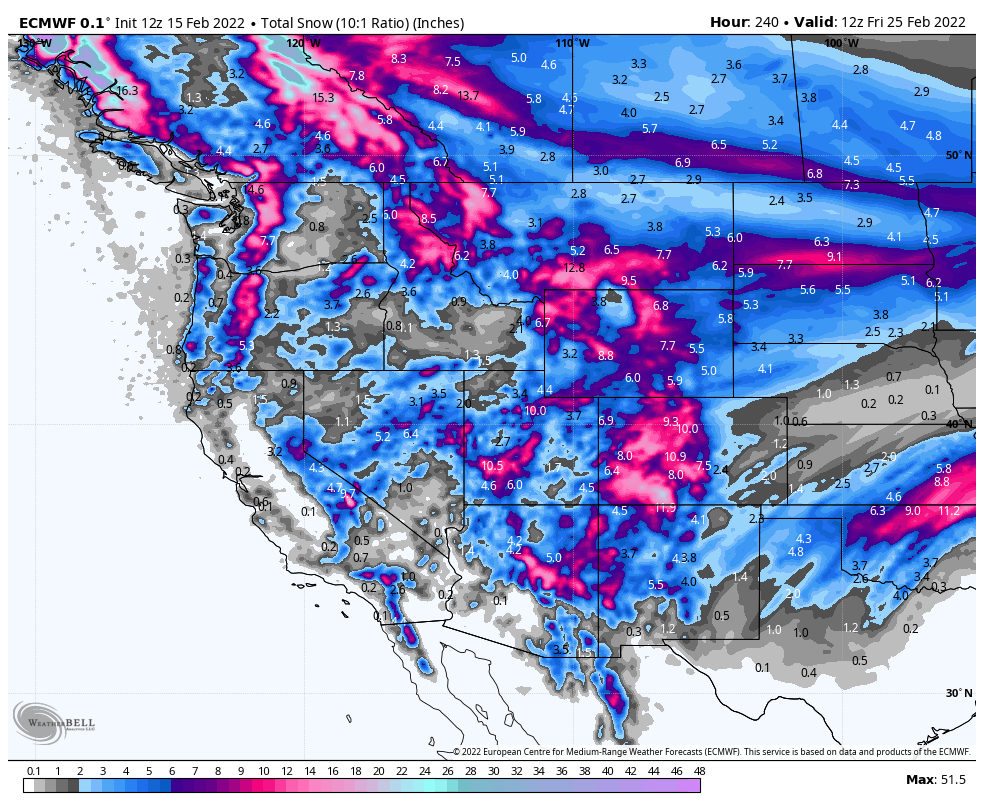 Possible snow between now and February 25.

We love to see these colors covering the maps again. Hopefully this will mark a shift in our pattern to snowier times but those long term forecast for the rest of this month and next month don’t look too pretty. More on that later.