Mark Staples from Utah Avalanche Center is warning that current snowpack conditions are extremely dangerous. He lays out the evidence to suggest that a serious accident could occur in the near future.

Please read the full blog below. Stay safe out there, friends.

Early in the morning on the day after Christmas I was up looking at snowfall across the state. What jumped out at me from snowfall graphs was that they look just like ones leading up to avalanche fatalities. I say this because I have written many accident reports about fatal avalanches. The graphs of snowfall history leading up to each accident typically look the same every time, and currently they are matching the graphs of current snowfall across the state. It was shocking for me to see the same snowfall patterns, and I think conditions right now are ripe for a serious accident.

Graphs below come from SNOTEL sites across the state showing precipitation in the form of snow water equivalent. That number, also called SWE, is simply how much water you’d have if you melted the snow. As a general rule of thumb, one inch of SWE is 10-12 inches of snow. The reason avalanche forecasters pay close attention to SWE is that we don’t care how much snow fell, we care how much weight was added to the snowpack. Water numbers tell us what that amount is. More weight (aka more water) means more stress. The more the snowpack is stressed, the more likely it is to break and produce avalanches.
Look at the shape of the line in the graphs below. When the line is flat, that means no snow was falling. When the line rises up, snow was falling. The higher the line goes up, the more snow fell. The steeper the line, the faster the snow was accumulating. 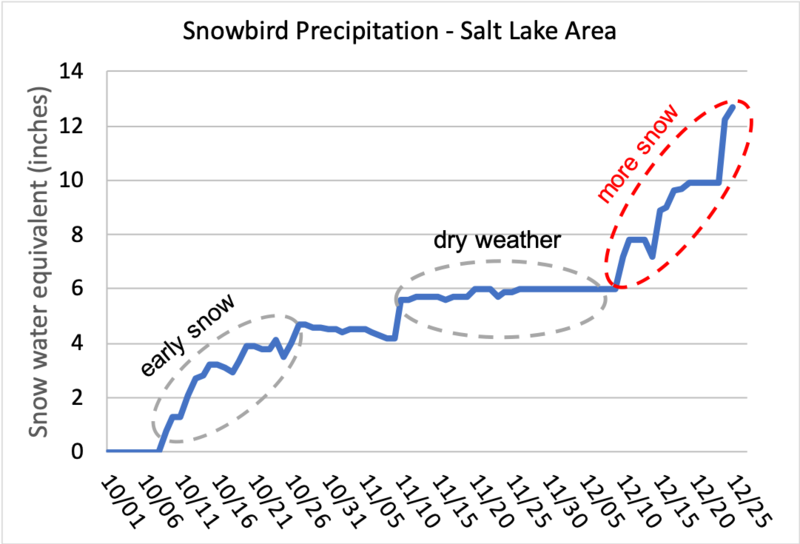 Three general patterns stand out:
Year after year, we see the same pattern leading up to serious or fatal avalanche accidents. The SWE line goes up in the fall (early season snow), the line goes flat (dry weather and weakening of the snowpack), and then the line goes up steeply (heavy snowfall, avalanches, & accidents). 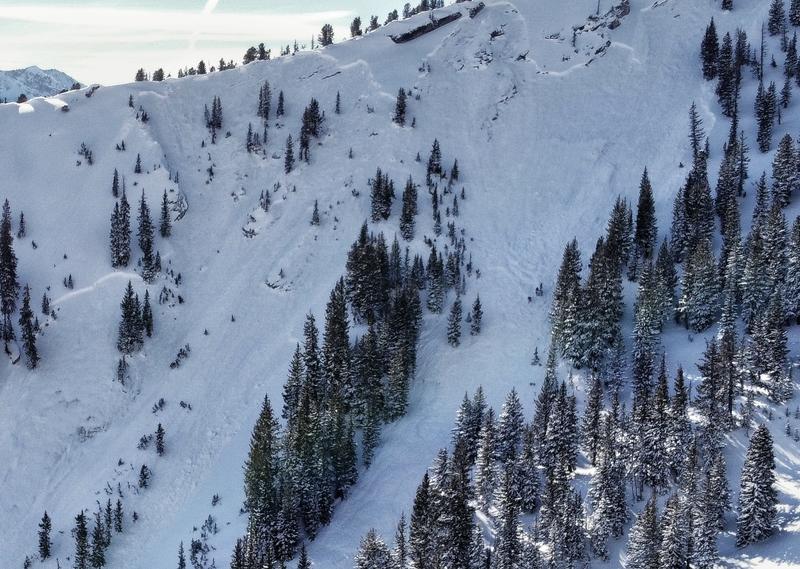 Photo – Avalanche that caught and carried a snowboarder over 800 feet downhill in Upper Days Fork, on December 18. He was buried to his waist and luckily ok.
Another pattern we typically see leading up to fatal accidents is a series of close calls and near misses. There have been four notable close calls this winter in Utah. The people involved were lucky and walked away without serious injuries. Thank you to everyone who reported these avalanches so that we can all learn from them.
Now, snow coverage has dramatically improved across most mountain ranges with the Christmas storms. More heavy snow is resting on weak layers formed during the November dry period. More snow means that the avalanches will be bigger and more dangerous. They can break 3-6 feet deep and hundreds of feet wide. To make matters worse, many of the storms in December came with strong winds from the south. The reason these winds are a problem is that they strip snow off south-facing slopes and deposit it onto north-facing slopes where faceted snow exists. Additional wind drifted snow makes the avalanche conditions worse and the potential avalanches much larger.
What worries me is that all the ingredients and patterns are in place for a serious accident. Stormy weather and the holidays have kept many people at home; however, that will change. At some point soon, we will have a day with beautiful sunny skies and plentiful powder, and I worry there could be an accident when that day comes. The snowpack can hide its deadly nature under a cloak of beautiful sparkling powder.  Luck eventually runs out.
The good news is if we can be patient and wait for conditions to improve, there is a good chance they will. For now, the main strategies are avoiding avalanche terrain or riding slopes that do not have weak faceted snow near the ground. Both strategies require some level of education and experience. The weak faceted snow from October and November responsible for so many recent large avalanches is now deeply buried and insulated and can begin healing. We will be monitoring this layer and letting you know when avalanche conditions will improve. They often do, but the challenge is to know how quickly or how slowly that happens. Stay tuned and please be safe.
Featured Image: Avalanche: Toots to Boot, 12/27/21, PDiegel, TDiegel, C Gregersen, Utah Avalanche Center Snowbird Cracking Down On Leaving Gear In Line For First Chair