Very heavy snow is currently falling in the Sierra. This will migrate into eastern Nevada, Utah, and Wyoming Monday night. 3-5 feet for Cali, 12-16 inches for Utah, and decent amounts in Wyoming. Colorado will see light to moderate snowfall Tuesday with some higher amounts in a few locations.

It’s currently puking 3-4 inches per hour in the northern Sierra. Snow levels crashed Sunday night to below 5500 feet so most mountain passes are receiving heavy snow as of 5 AM Monday. Heavy snow will push south over Mono County during the day Tuesday. Currently, the cold air has not reached Mammoth but things should pick up nicely during the day Monday. will Snow will begin to taper somewhat Monday afternoon in the northern Sierra while it continues further south. Multiple chain laws are in effect in the Sierra with some road closures. Excessive winds, wet snow, mudslides, are all on tap. Avalanche Danger will be very high from the wet density of the snow, very high precipitation rates, and strong winds.

Below: Webcam at 5 AM at Sugarbowl Ski area looks really deep (Some snow may still be on those benches from the last storm- not sure?) Just imagine how much is at the summit! It’s deep! 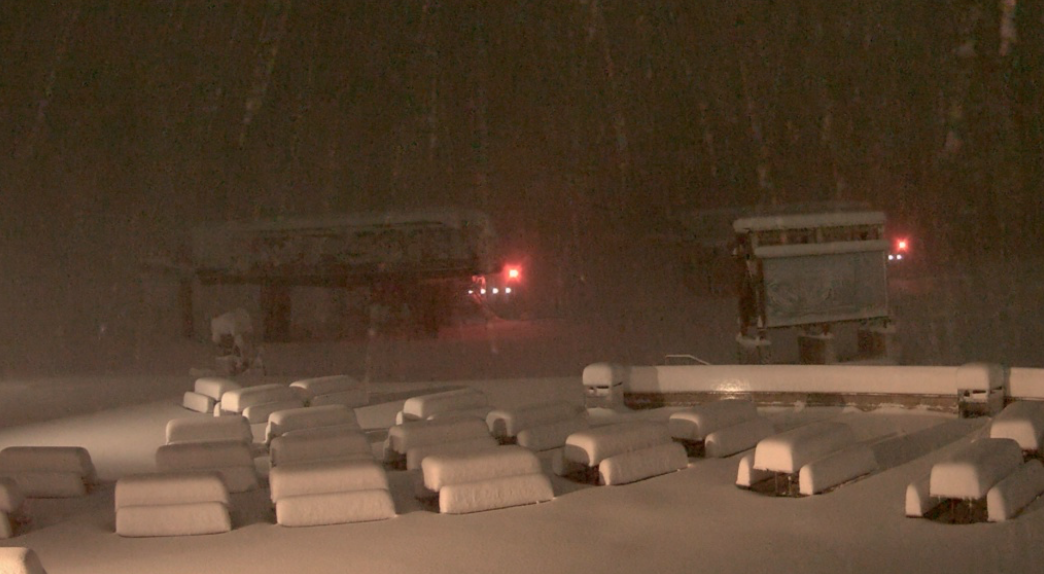 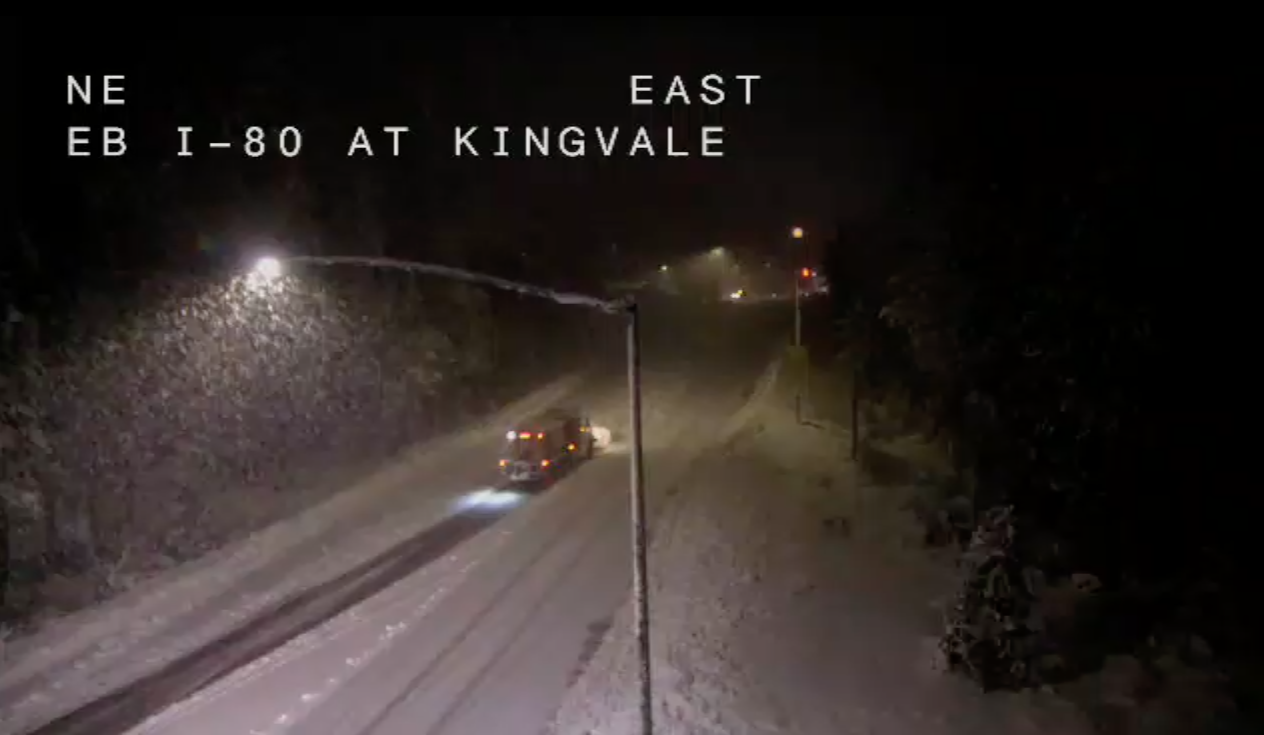 Below: Very impressive hourly precipitation rates for the Sierra, and in some cases approaching .05 inches per hour Monday (3-4 inch per hour snowfall rates). This heavy band moves from north to south Monday morning. Roads will become snow packed very quickly.

Below: @powderchasersteve via Instagram taking advantage of some perfect glass like conditions on Lake Powell on Saturday. It’s time to retreat to winter mode! 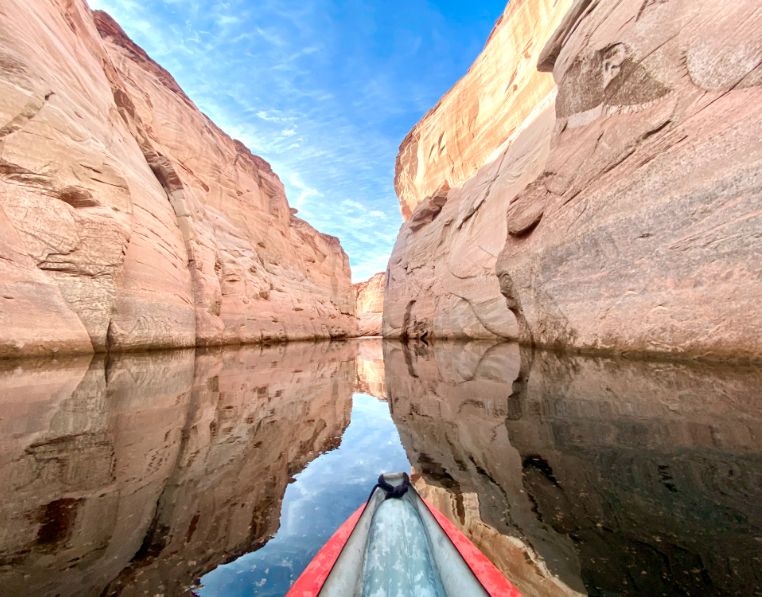 Discussion for the Rockies and Cascades

Elsewhere in the west snow will be on the increase over eastern Nevada (Ruby Mountain Range), Wasatch of Utah, and the Tetons late Monday to Tuesday. Models show decent amounts for the Tetons above 7,000 feet (5-11) and higher amounts for areas of northern Utah favored by NW flow (11-16). Snow levels start out very high Monday (9-10K feet) and crash to 5500 feet by daybreak Tuesday. This will be primarily mid to upper elevation event for many areas of Utah (5-10) with the Cottonwoods scoring post-frontal snow showers in NW flow from Tuesday morning to perhaps Wednesday morning. Those persistent snow showers could land an excess of 16-18 inches in some areas of the Cottonwoods by Wednesday morning. Powder Mountain, Canyons side of Park City, may all benefit as well from the colder air on Tuesday (NW flow). This system will see wind gusts in excess of 100 MPH at the summits Monday with a slow downtrend once the cold front passes late Monday. Winds will remain moderate at the summits Tuesday with continued snowfall. 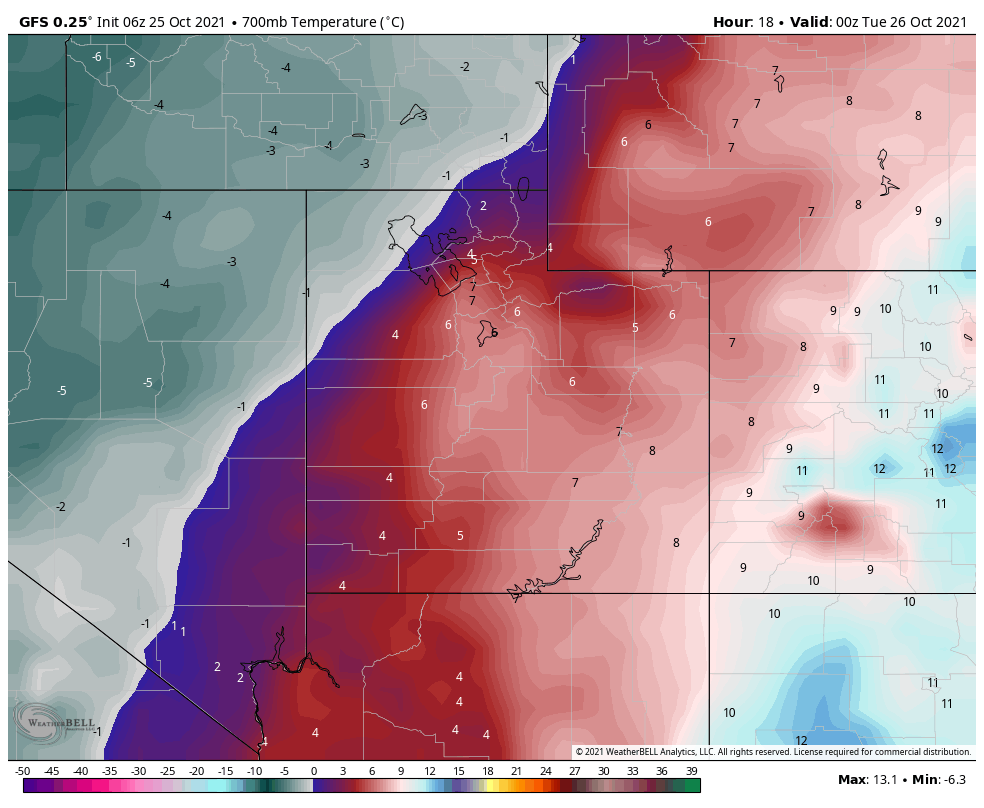 For Colorado, the models show moderate snow for many locations along I-70 with some higher amounts further north towards the summit of Rabbit Ears Pass. Temps start out very warm Monday night and Tuesday morning The bulk of the action will happen during the day Tuesday into Wednesday with winds shifting from S, SW to NW. This will push snow to the Valley floor Tuesday morning with peak snowfall intensities lasting in the early afternoon. Models show slightly higher amounts towards the Elk Range (Aspen) and Northern San Juans (Telluride). Some of these areas by late Tuesday could exceed 10 inches above 8,000 feet (Steamboat summit is a wildcard). Vail Pass can sometimes sneak out some surprises with NW flow and snow showers continuing into Tuesday evening. We shall see!

The Cascades will be addressed in the extended forecast below.

Cooling midweek and unsettled conditions will continue in the Pacific Northwest. Snow levels drop to 4800 feet  by Wednesday with decent snowfall likely for both the northern and southern Cascades of Washington (Lighter amounts in Oregon).  Warming occurs Thursday before another cold front drops into the PNW late this week with additional snowfall. Total snowfall could exceed 7-20 inches at upper elevations of the Pacific Northwest by the end of the week with elevation playing a large factor in the numbers.

Below: Total snowfall through Friday for the Cascades (Highest amounts on the western side of Washington with some uptick in moisture for northern Idaho mid to late week). 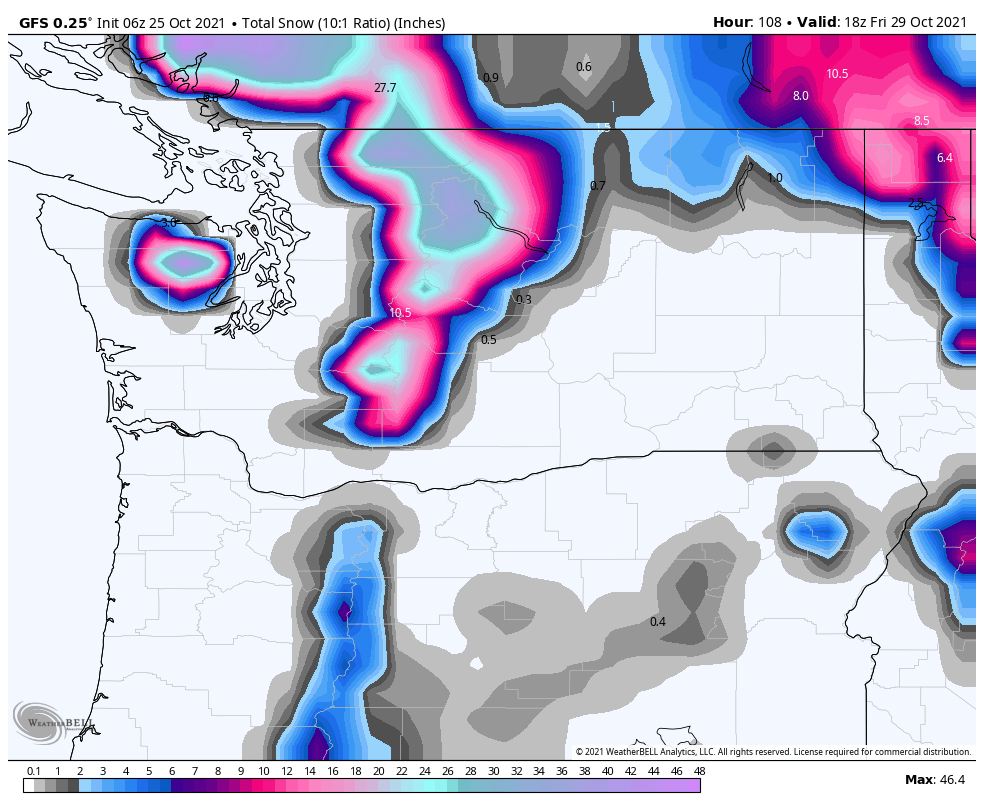 Enjoy the powder everyone! Remember Avalanches are a real issue early season (Snow on top of dirt) so please stay safe if you are in the backcountry this week and have all the necessary skills and equipment if you must venture out.