The next several days look active with 2 systems impacting the 4 corners this week. The Cascades continue a cool unsettled pattern.

Trip Report: On Monday, I chased to Stevens Pass where nearly a foot of fresh powder fell Sunday night. My 5 AM wake-up call put me on Highway 2 (The Pass) when suddenly the road closed literally minutes before I got to the snowplows. Avy mitigation went on for 2 hours. I still made it to the Ski Area for 1st chairs. Unfortunately, delays in employees from the closure kept many lifts on hold, some until as late as 11:15 AM. Double Diamond and the backside were ready to open from an avalanche mitigation standpoint (Thank You Patrol) but it appeared some lift attendants were just getting on the hill at that point even at 10:30 AM. This was an unexpected closure and I assume it backed up traffic for many miles. The snow was medium density, filled in the bumps, and you could pretty much rip it hard nearly everywhere on the mountain.

Sad News: As a resident of Boulder, I am shocked and saddened at the loss and unthinkable actions that occurred yesterday. I’m taking a moment of silence. We are all impacted by this tragic event. My heart goes out to the families, residents, and officer Talley who perished in the tragedy.

The next storm system is going to impact the 4 corners region focussing on New Mexico for Tuesday night. This storm will also provide decent snowfall for northern Arizona (Flagstaff). Winds are from the NE providing a tricky chase (Favors eastern sections of the Divide). Most deterministic models show very little snow along the Divide for Colorado aside from 3-8 inches for the San Juan Ranges (Wolf Creek is favored however the higher totals may pop up on the east side of the pass). However, the short-term High-Resolution Model (HRR) that I often put good confidence provided some data on Tuesday morning that it’s possible enough moisture will sneak north into southern Summit County with Ski Cooper, and perhaps even Breck seeing some accumulating snowfall for Tuesday night. Ski Monarch is a wildcard who often gets skunked with E, NE flow but not surprised to see some light or moderate totals for Wednesday morning (Monarch Pass).

For New Mexico, several Ski Areas are closed for the season. With this pattern of NE flow, Angel Fire would have been a good bet (Closed), however, Ski Santa Fe can also reap some rewards in this pattern (Open). Taos often sits just west of the highest moisture with NE winds. I would aim for watching the cameras at Taos and expect 3-7 inches Tuesday night with snow continuing into Wednesday. Taos just nabbed 6 inches Monday night and over 30 inches in the past week. While NE winds are not the most favorable, they could still nab 6-12 inch totals from late Tuesday to early Wednesday. Keep an eye on Ski Santa Fe as well.

Another cold system will dance into the Cascades Wednesday/Thursday. This will bring a foot of snow for a wide area of Washington and Oregon (Storm ski Wednesday, and some new snow for Thursday morning). Might be worth a chase.

Below: Total snowfall for the Cascade Range of Washington and Oregon Wednesday/Thursday. 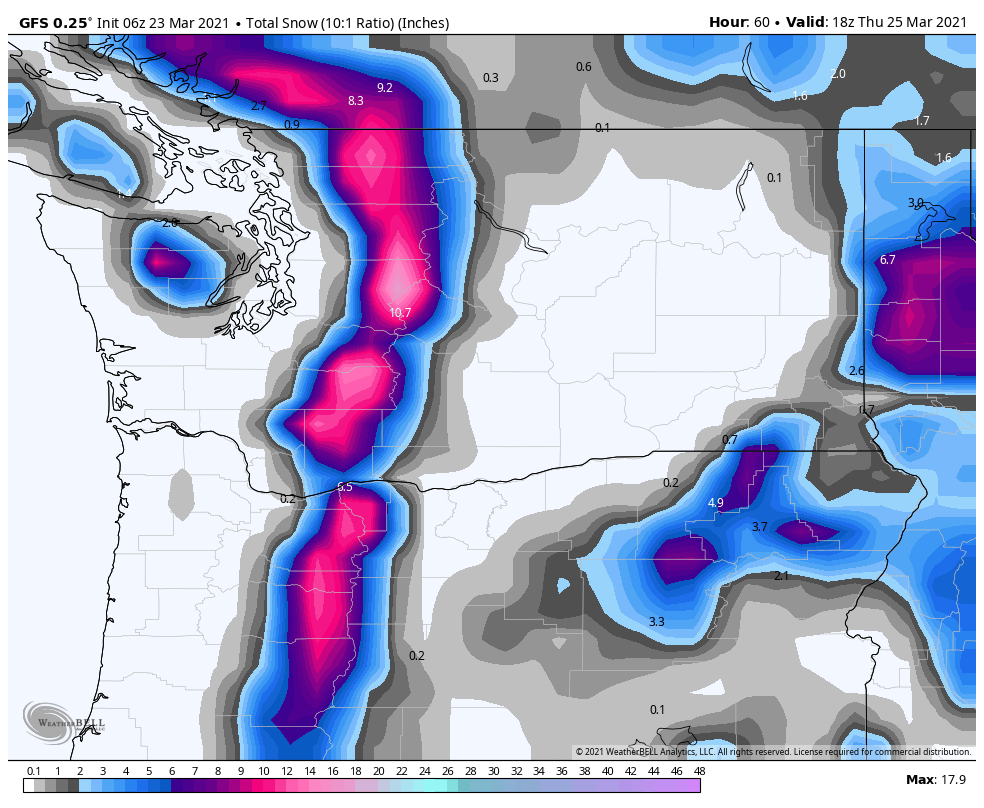 That system will bring some additional light to moderate snow to the north-central Rockies by Thursday/Friday (Wyoming and Utah), before dropping south over the 4 corners for Friday/Saturday. This could bring decent snow totals to the San Juan Ranges, especially in Colorado. Some snow will push north over the I-70 corridor but it’s too early to forecast amounts. Seems to favor Colorado over New Mexico, unlike the first storm.

Below: Totals snowfall for Colorado and New Mexico from today through early Friday. This combines both the Tuesday night/Wednesday storm and the late week system. Other models show slightly higher amounts especially late week for Summit County depending on the storm track. The highest snow totals this week will certainly be found in the southern mountains. 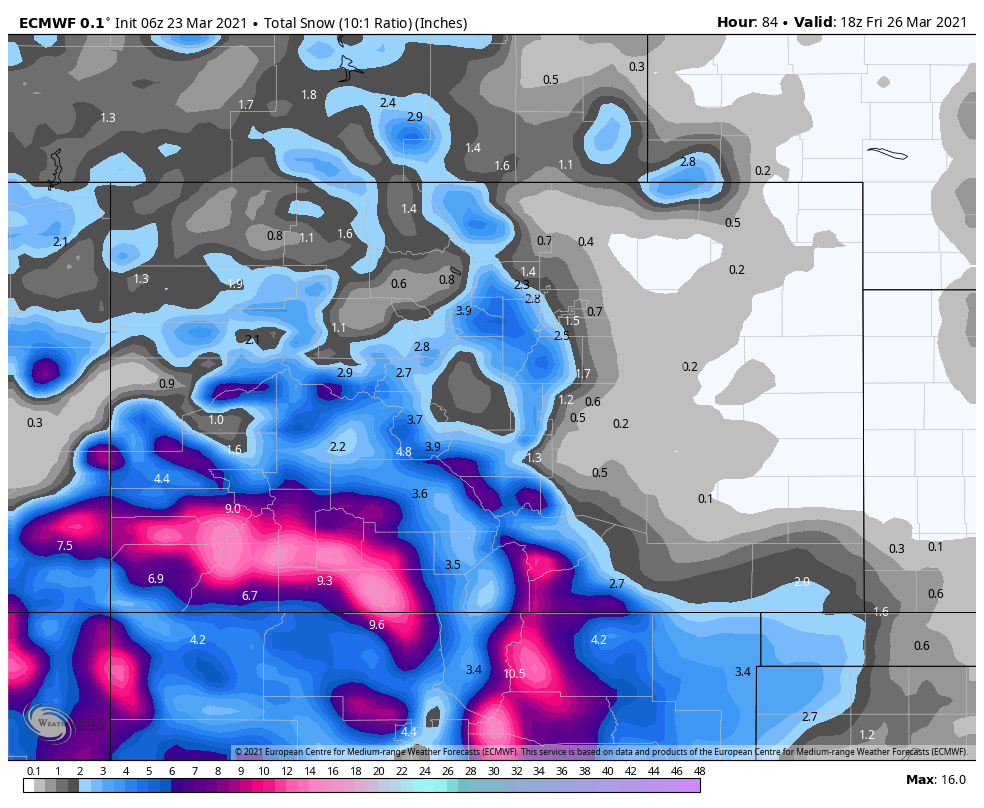 Below: Total snowfall for the west through Friday PM. Highlights are in the PNW, and the San Juan Ranges. Other areas in the west including WY, MT, and UT will also see some snowfall albeit lighter amounts.