A very significant and cold storm is going to impact the West late this week through Monday. Several mountain ranges from the Pacific Northwest and most of the Rockies will benefit including the wildfire regions of Colorado by Sunday night.

Deepness has begun! In fact, 1-2 feet has already fallen in some spots of central and southern Montana towards the Wyoming border. The next system is going to plunge temps to mid January like readings with negative numbers even in some Valley locations of the west by late the weekend. Snow will be falling from the Cascades through most of the Rockies and even extending into New Mexico by Monday morning. Colorado will grab decent moisture over the Wildfire regions by Sunday/Monday. There is good confidence in the models for the Cascades, Central Panhandle of Idaho, and Montana with some disagreement on positioning for Colorado and New Mexico late this weekend. There is 100% confidence that a very broad area of the north central Cascades and northern Rockies  will wake up to snowfall from this system that extends into the Front Range of Colorado and northern New Mexico late this weekend. Has winter arrived? Keep reading.

The Cascades will see the highest totals from Stevens Pass and areas East (Eastern Cascade Range) including the northern interior of Washington (North of Wenatchee) Friday-Saturday. Its possible deeper snow is found heading down Route 2 towards Leavenworth than on the western side of Stevens pass. I would expect 6-10 inches (Stevens Pass Ski Area) for these locations and lighter amounts to the south or extreme north.

The southern Panhandle and eastern Idaho along the Montana border grab decent amounts with less snow further north towards I-90. 12-18 inches are likely for the north central regions of Montana  extending south to the Wyoming border Saturday. While deep powder is most favored for the interior of Montana, Big Sky and Bridger Bowl will both grab freshies (6-9) by Saturday afternoon. The Absaroka Range in Wyoming (Interior range extending N/S to the Montana border) and the northern tip of the Wind River region will see the highest amounts, especially the closer you get to the Montana border by Saturday afternoon. Some areas including Red lodge could see 12-18 additional inches! 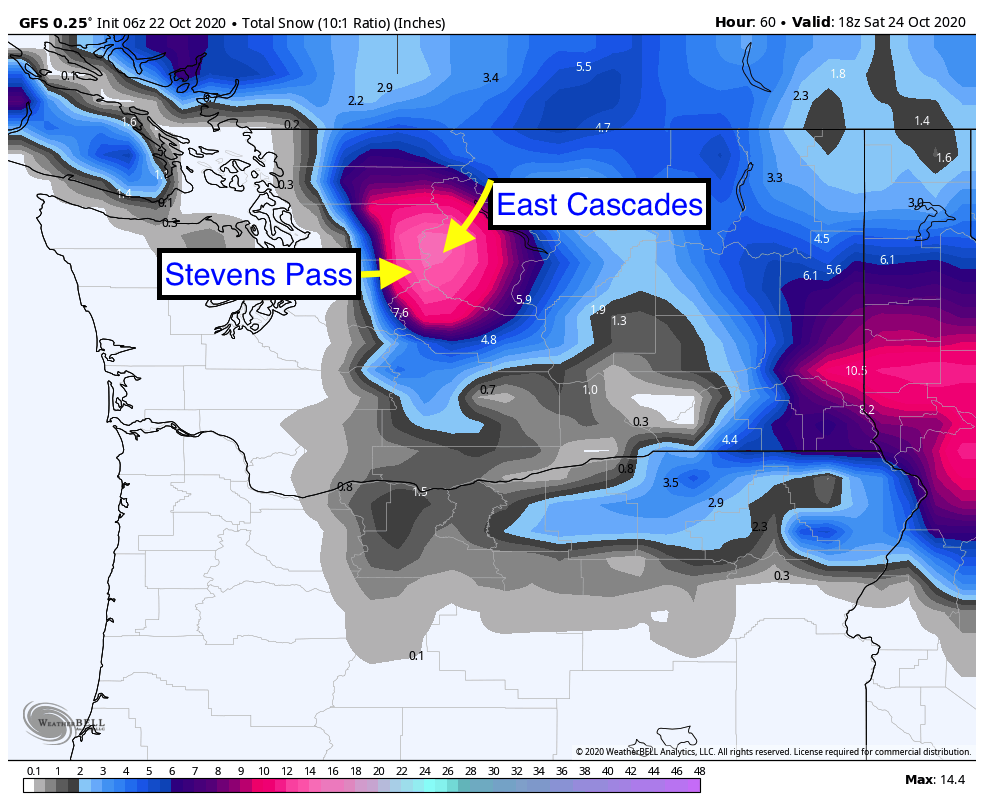 Below: The town of Red Lodge Montana this morning! (Storm #2 this weekend will deepen this further).

The Tetons are a solid bet for 5-10 inches with the models not consistent. The GFS takes a broad area directly over Jackson and most of the Teton Range while the European model favors areas just East or south of Jackson. It will be near 0 degrees F by Sunday morning with snow on the ground for the entire Valley as early as Saturday. Less snow might fall in the northern end of the Grand Teton National Park with higher amounts further east or south. 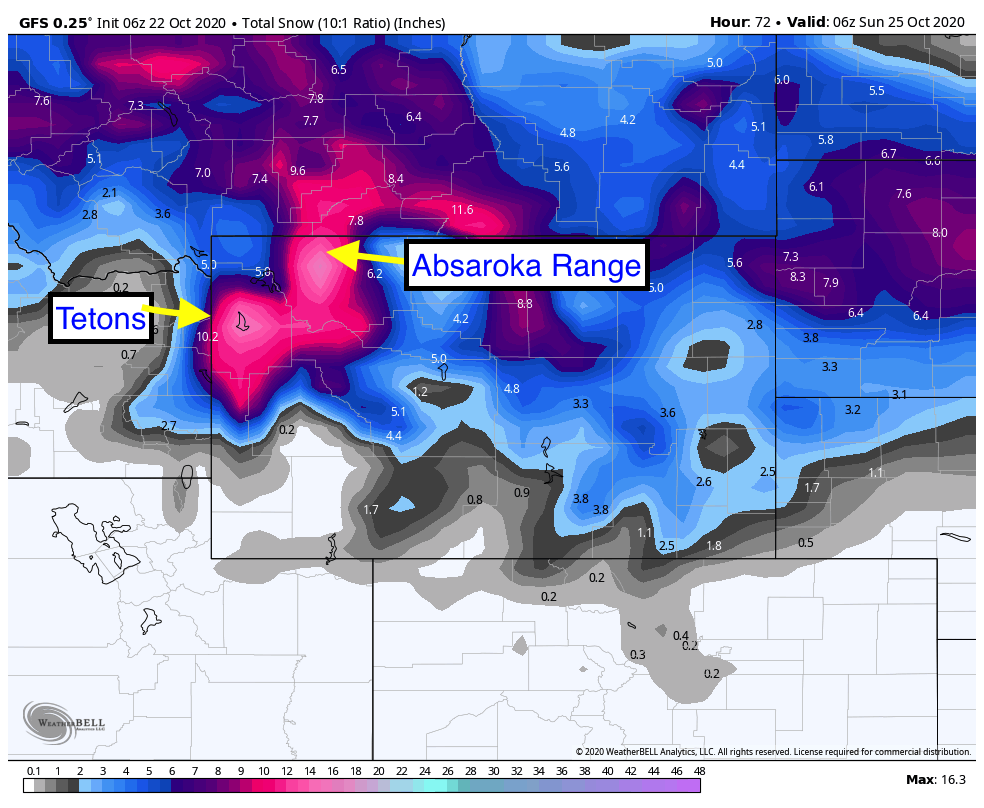 The broad and very cold system takes aim at Colorado beginning on Sunday. The models are not in good agreement with who sees the most snow. The European Model shows a broader and deeper solution for most of the northern Front Range extending through the I-70 corridor and south to the the San Juan Range (10-18).The American GFS models shows slightly less snow for the northern Front Range with higher amounts extending south into New Mexico (Taos). There is very high confidence that Colorado will be waking up to deep snow by Monday morning over a broad area. The wildfires will take a good hit as well! Right now, my thoughts are the deepest amounts will occur along the northern Front Range Mountains, Rocky Mountain National Park, Berthoud Pass, Summit County where winds will be from the north initially. Winds shift to the Southwest on the backside of the storm providing a nice push of snow for the San Juan Range. Wolf Creek or Taos might be good picks. With model disagreement (Euro pushing more snow west along I-70 and the entire San Juan Range, and the GFS pushing snow further east and south towards New Mexico) a new forecast will be issued as we get better consensus.

ANNOUNCEMENT:  Powderchasers has partnered with Tire Rack this season on snow/winter packages. We advocate using snow tires in the winter if you want to make 1st chair.  Check out these packages here. You might want to think about snow tires now!

Please join our Concierge if you want to have custom chase forecasts, stab the deepest storm of the season, or simply support Powderchasers.

Enjoy the powder everyone! It’s going to get very cold so dress accordingly.