The Art of Skiing: The Sidestep

The Art of Skiing: The Sidestep 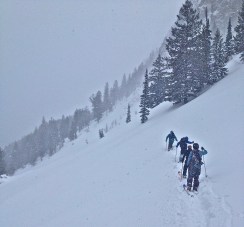 If you know, you know… | Photo: Barclay Idsal

Every skier has one.

Maybe it’s a spiral staircase that weaves around a stand of trees for untouched turns? Maybe it’s a diagonal pathway that accesses a favorite lift without having to take the extra ride? Or maybe it’s a long-winded highway that transports skiers from Powderfield, USA back to Après, France?

Whatever the case may be, the sidestep is a route, a challenge, and a paradise if you look at it right.

And those looking at it right, see the sidestep for what it truly is—an art form.

Sidestepping takes skill and practice, which begins for most skiers during pre-adolescent times. As little rippers yearn for more turns, they inevitably find themselves down slope from their parents, the lift, or a ski instructor and are told, “if you want to keep skiing… you need to step back up here.”

What ensues is a dejected, counter-intuitive movement that changes skiing forever. Still, once the step is made, a series of milestones inevitably follow. The first hike-to-terrain, the first untouched powder turns, and the first hidden shack—all accessed in some fashion by the sidestep.

Although, the sidestep is viewed by some as a nuisance, in the words of friend and ski-tuner “it’s part of the run. If you don’t like the sidestep, then you might as well not like skiing.”

Most importantly, we all have one in mind that accesses “the goods.” One we keep secret between friends. One we utilize during certain times of the day. And one that brings us back to why we ski.

The give and take of it all is temporary pain for temporary pleasure. The old adage that embodies the sidestep is “you have to pay if you want to play.”

Yet no matter how much you play or pay, our memories, like the sidestep, disappear with one good storm… That is until one rogue soul returns to the spot—to break the sidestep and find temporary pleasure. However, through the sweat, steps, and anticipation, we find something eternal—joy.

side step, the art of skiing, Unofficial Original, ALL, Skiing