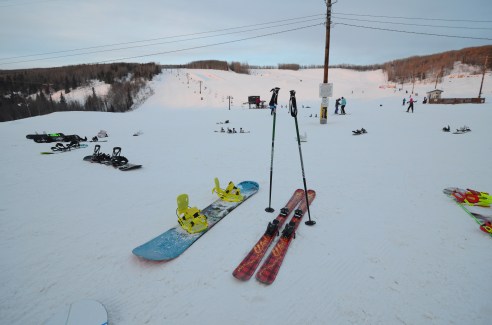 Since moving to Big Sky in 2010, ski technician Jimmy Sieman has learned a lot. He’s become proficient in judging a continental snowpack from an inter-mountain one and can execute a seriously flawless daffy.

However, finding balance between riding and romance has continued to elude the 6-year resident of Montana and it’s only getting worse. Just yesterday, Sieman found himself teaching his summer girlfriend how to snowboard on what he referred to as the first “real” powder day of the season. While many ski bums will wince in pain at hearing this unfortunate story, everyone knows that nobody is to blame but Jimmy himself.

Back in August, after 3 years without a memorable sexual encounter, Jimmy found himself at the Black Bear Bar and Grill when his elbow unitentionally made contact with new-to-town female and Florida native, Tricia “The Dish” Summers. That menial physical contact was enough to spur a conversation between the 22 year-old Floridian and Sieman that would ultimately last til bar-close.

What Sieman could have been doing | Photo Credit: Zach Dischner

By the end of the night, the two lovers stumbled back to Summers’ apartment where they proceeded to have what Sieman still refers to as “the best sex of my life.”

Fast forward 4 months and Sieman is not so content. Reports from Sieman’s buddies indicate that the avid skier has yet to go for a rip with his friends but instead spent the last 10 days on the hill covering the basics of toe side vs. heel side turns with the object of his desire. The ski tech has never snowboarded a day in his life.

“Everyone always says that you can learn how to snowboard in 5 days– turns out that rule doesn’t apply to this girl.” – Trevor Sieman, Ski Bum

Speaking with Sieman, it seems as though yesterday’s pow day might have been the final step in ending what would otherwise be a beautiful relationship in a desolate dating pool. “This sitting in the cold and getting blasted by the wind shit while she continually falls on her ass is starting to piss me off,” Sieman told this reporter. He went on to say that no sex is worth missing a powder day.

When asked if she valued the relationship more after his individualized snowboard lessons, Summer simply stated, “Jimmy’s okay and snowboarding is so much fun but I’m kind of interested in his boss, Millhouse… would that be a bitchy thing to do?”

Shortly after these interviews, the two reportedly broke up just before heading back into The Black Bear Bar and Grill. Summers continued into the bar and has since been seen touching elbows and laughing with Jimmy’s manager Millhouse.