[All Photos Courtesy of RedBull©]

Last year, Scott Jurek popped a champagne bottle atop Maine’s Mt Katahdin after he set what many believed would be a longstanding speed record for the Appalachian Trail.

But like all good things, Jurek’s reign was bound to end. As of Sunday, the AT has a new king– Karl “Speedgoat” Meltzer. According to a press release from Meltzer’s sponsor Redbull, the ultra runner arrived at Springer Mountain in Georgia on Sunday and thus completed the 2,190 mile trek in 45 days, 22 hours and 38 minutes– the official new record. 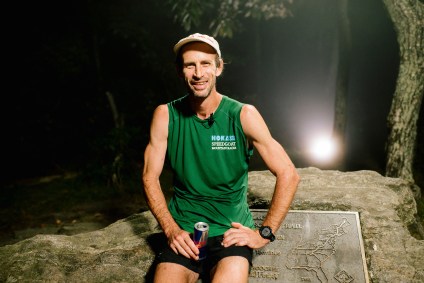 Karl Meltzer poses for a portrait after breaking the record for running the length of the Appalachian Trail on 18 September, 2016.

The accomplishment marks a long road for Meltzer, who went from ski bumming @Snowbird to becoming one of the most recognizable names in ultra-running over the course of 20 years. Starting in 2008, Meltzer hoped to claim the record two times before but was unable to break through to a record time on the AT. Instead, he dropped out once and watched as his friend Scott Jurek set what would be the new record in 2015.

But unlike Jurek, who stayed true to a Vegan diet throughout the Trek, Meltzer gorged on candy, energy drinks, and beer along the way. Each night, Meltzer would indulge in a couple of cold ones after running all day. Turns out it worked as Meltzer was able to muscle through a grueling 83 mile push to the finish. Meltzer was last sighted drinking beer and eating pizza.