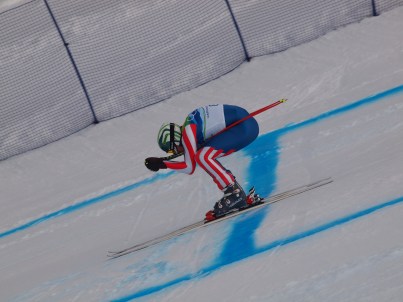 Bode’s comfort zone is unlike the rest of us. | Photo Credit: Jon Wick

Bode Miller is the definition of a rebel so when the world-famous downhiller announced that he would be returning to competition, the only people surprised were his former sponsors.

In a recent turn of events, Miller has rediscovered his rebel identity by suing his former sponsor for the right to compete in FIS-sanctioned world cup events. According to SkiRacing.com, his termination agreement with HEAD included language would disallow the poster child of American ski racing from competing on anything but HEAD skis, boots, and bindings.

“We will take every action to enforce our rights against Bode. That said, HEAD would welcome Bode’s return to World Cup racing, but it has to be on HEAD equipment.” – Johan Eliasch, HEAD CEO and Chairman

In a prepared statement, HEAD claims Bode left their ski company with his own financial interests in mind– a move that may have been a little shortsighted. According to Bode’s legal team, this season is Bode’s “last real opportunity to competitively compete in the World cup racing circuit and attract lucrative endorsements needed to provide for his family.”

CEO and Chairman of HEAD, Johan Eliasch says he would love to see Bode return to racing “but it has to be on HEAD equipment.”

HEAD has been sued by Bode Miller, whereby Bode Miller is contesting his obligations pursuant to the termination of his endorsement agreement with HEAD in 2015. Bode Miller told HEAD he would finally retire from ski racing but asked a personal favour that his contract would be terminated a year early such that he could enter into an endorsement contract with another ski company for his personal gain. HEAD agreed with his manager to release him from his contract based on his unequivocal intention to stop ski racing, and on the condition that in the event that he changed his mind he agreed not to compete in World Cup or World Championship racing until the end of the 2016/17 season on any other equipment than HEAD skis, boots and bindings. Bode Miller agreed to this as is stipulated in the termination agreement. Notwithstanding the terms of the termination agreement, Bode Miller recently announced that he would breach this agreement. HEAD will be seeking to have Bode honour his contractual commitments and is fully behind him skiing competitively this season, on Head skis, as he is obligated to do.