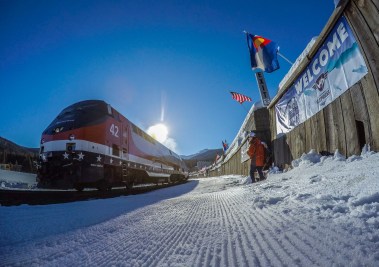 While riding trains to ski areas is about as routine as it gets in Europe, public transportation options for skiing are few and far between in the United States. But if anyone is going to do it, leave it to forward thinking Colorado to make the necessary change.

Tomorrow, Amtrack along with Winter Park Resort will announce details regarding the return of its legendary “Ski Train” reports The Denver Post. The train will transport skiers from Union Station in downtown Denver to the Grand County ski area solely on the weekends.

“Plans for seasonal weekend Amtrak passenger train service from Denver Union Station to the slopes of Winter Park will be announced tomorrow at the Winter Park Resort, including the ticketing availability date, schedules and fares.”

The train ran for 69 years before the line was terminated in 2009 but a recent growth spurt in the Denver metropolitan area has made weekend traffic on I-70 almost unbearable. Thankfully, Amtrack and Winter Park are setting the tone for ski area public transportation. Let’s just hope the rest of the United States isn’t tone def.

*We will give more details including schedules and pricing tomorrow.